Would someone please stuff a sock in this woman’s mouth? 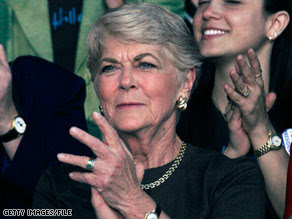 She is making an absolute fool out of herself every time she speaks:

First she says that Obama is only where he is because he is black. This is hilarious. Why on earth does Clinton-supporter Ferraro think Hillary is in the position she is in? Does Bill’s presidency qualify her? What exactly are her qualifications again? (On Obama, I think he is where he is because he is a pretty charismatic and inspiring speaker, but also because a lot of people like him more than they do Hillary.)

So, she takes a swipe at Obama, and then when she is called on it, she follows up with “Racism works in two different directions. I really think they’re attacking me because I’m white. How’s that?”

At this point, if I am associated with the Clinton campaign, I call her up and ask her to please shut up. But she didn’t. She keeps digging deeper:

An unapologetic Geraldine Ferraro said Wednesday that her comments about the impact of Barack Obama’s race on the electorate were taken out of context, and she stands by her words.

“It wasn’t a racist comment, it was a statement of fact,” she said on CBS’ “The Early Show,” adding that she would leave Hillary Clinton’s national finance committee if she were asked, but would not stop raising money for the New York senator’s presidential bid.

Ferraro also told ABC’s “Good Morning America” that “every time” someone makes a negative comment about Obama, they are accused of racism.

Note that when one of Obama’s advisors called Hillary Clinton a monster, she was immediately asked to resign. I have yet to hear the Clinton camp suggest that Ferraro do so. Perhaps if she commits a felony, they will start to wonder if it might be time to distance themselves.

Meanwhile, Hillary, having failed in her bid to get front-runner Obama to accept her offer to step aside (but he could be her Vice-Presidential running mate!), continues to try to steal the election, since she can’t win it fairly.

I can’t wait to see Hillary lose this election. I think we will see a cleanly fought election between Obama and McCain. I think a Hillary/McCain election would be pretty nasty – because that’s the way Hillary and company operate.

14 thoughts on “Someone Muzzle This Woman”