The oil and gas industry has had a rough ride since the oil price downturn of 2014. Over the past five years, the Energy Select Sector SPDR ETF (XLE), which represents the largest energy companies in the S&P 500, has fallen by 25%. The S&P Oil & Gas Exploration & Production SPDR ETF (XOP), representative of the smaller-cap drillers, is down 56% over the same time frame.

There are some fundamental reasons for the energy sector’s decline, and some psychological ones. From a fundamental perspective, oil and gas prices today are much lower than they were a decade ago. This has pushed many oil companies into financial distress.

The key psychological factor behind the energy sector’s bearishness is a widely-held belief that the world is on the cusp of the end of the age of oil. If global oil demand peaks, as a result of legislation designed to reduce carbon emissions, and more specifically an electrification of the transportation fleet, then the oil industry may follow the steep decline the coal industry has experienced.

Thus, investor sentiment for the energy industry is decidedly negative. But one company has risen above its peers since the energy bear market began. That company is also poised to outperform once the bear market ends.

The Best of the Bunch

I am speaking of ConocoPhillips.

Because the roots of Conoco and Phillips date back over 100 years, the company has experienced numerous oil booms and busts. As a result, ConocoPhillips has adopted a far more fiscally conservative approach to drilling than many of its competitors.

The downturn in oil prices did hit ConocoPhillips hard, but not as hard as the rest of the industry. And once prices did decline, the company took defensive measures. It sold assets, paid down debt, cut its dividend, and put itself in a position to profit in an era in which oil prices might be $50 a barrel.

The net result has been a steady increase in the company’s cash flow. Since the deep downturn in 2015, cash flow has increased each year. In fact, today ConocoPhillips is generating more cash flow with oil prices in the $50s than it was in 2013 when oil prices were over $100.

Earlier this month, the company release third quarter earnings that were outstanding. While many peers struggled, for the third quarter ConocoPhillips reported:

In short, ConocoPhillips has been a shareholder friendly, cash generation machine despite oil prices that remain below $60.

Last week, the company held an Analysts and Investors Meeting at which they unveiled a 10-year strategic plan. Early in the presentation, they highlighted their remarkable transformation over the past three years: 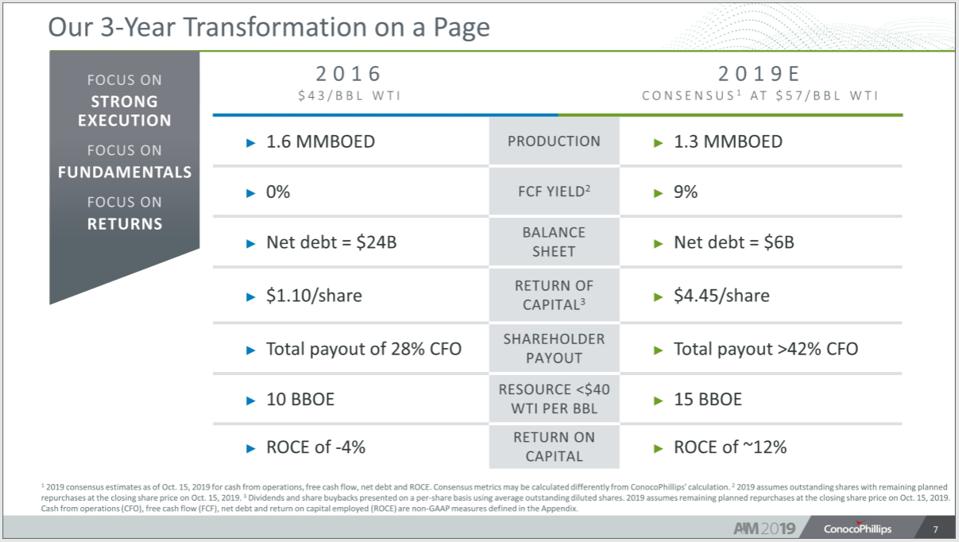 Although the company is producing less oil – primarily because it is focusing on low-cost production – it has shown vast improvement across all important financial categories. Net debt is a quarter of what it was just three years ago, but the company has increased by 50% its oil and gas resource that breaks even at a $40 WTI price. No other independent oil and gas producer can come close to these financial measures.

Over the next decade, the company projects that it will generate about $50 billion in FCF if oil prices remain at $50/bbl. The company’s top stated priority is to maintain production and pay its dividend. Just behind that is annual dividend growth, while returning 30% of CFO to investors. The company projects a total return to shareholders through dividends and share buybacks over the next decade of $50 billion. This is substantial, given the current market cap of $65 billion.

With a lot of companies, you could take these projections with a big grain of salt. But because ConocoPhillips has been around a long time – and because the company has already demonstrated the kind of fiscal restraint that has allowed them to rise above its peers – you can have a higher degree of confidence that they will deliver.

This bear market in oil won’t last forever. But ConocoPhillips is built to survive it, and thrive once it ends.