About 200 countries are presently convened for the United Nations Climate Change Conference COP 25 in Madrid. The Conference of the Parties to the UN Convention on Climate Change (COP) is tasked with making sure the agreements under the Paris Climate Accord are met. Under that 2015 agreement, more than 2oo countries agreed to take steps to keep global warming to below 2 degrees Celsius from pre-industrial levels and, to less than 1.5 degrees above if possible.

President Donald Trump announced in 2017 that the U.S. would cease participation in the Paris Accord due to the potential negative impacts on the U.S. economy. Last week I received a press release that the U.S. will no longer be able to pressure China into action, given our decision to withdraw from the agreement.

China has gotten a lot of positive press for its investments in wind, solar, and electric vehicles. China leads the world in spending in each of those categories. Nevertheless, China is also the world’s largest emitter of carbon dioxide by far.

The Kyoto Protocol went into effect in 2005. Like the Paris Accord, nearly 200 countries agreed to limit their carbon dioxide emissions. The U.S. never ratified the agreement, and Canada subsequently withdrew.

Below are the Top 10 emitters of carbon dioxide from 2018, along with the global share and the change each country has experienced since the 2005 Kyoto Protocol. 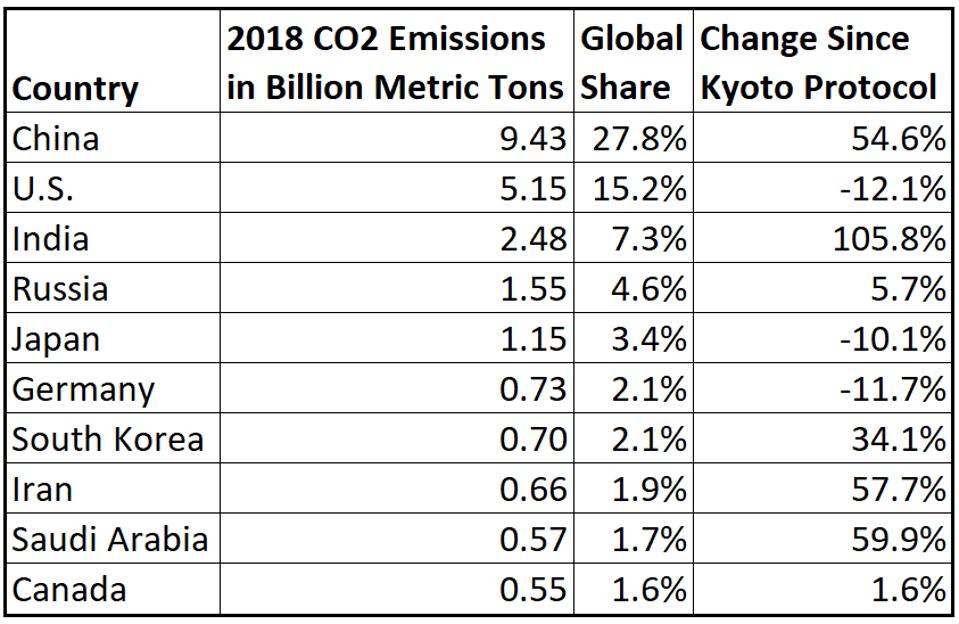 Of the Top 3 emitters, China and India have both experienced massive increases since 2005. The U.S. has experienced double-digit declines, as have Germany and Japan.

A key driver in the U.S. and Germany was legislation aimed at limiting carbon dioxide emissions. This helped spur rapid growth in renewable energy usage in both countries, which helped lower demand for coal.

But in the U.S., an even larger driver in reducing coal consumption was the shale gas boom, which created enormous supplies of cheap natural gas. Over the past decade, consumption of renewable power in the U.S. rose by 349 terawatt-hours (TWh). Over that same span, power from natural gas increased by 696 TWh — nearly double the renewable energy contribution.

It should be noted that the U.S. is first among countries when it comes to responsibility for historical carbon dioxide emitted into the atmosphere. However, given China’s current emissions and the trends, they will pass the U.S. in the overall CO2 contribution to the atmosphere in a little more than a decade.

Thus, it is clear that the U.S. bears responsibility for its share of the atmospheric carbon dioxide inventory. However, China now emits more than the next three countries combined, and emissions there continue to grow. China is therefore the single most important country when it comes to curbing carbon dioxide emissions. What China does — or doesn’t do — will largely determine the failure or success of the Paris Accord in reining in global carbon dioxide emissions.