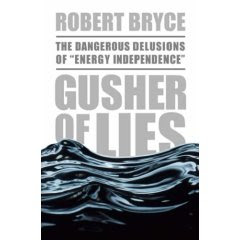 I have been a fan of Robert Bryce’s writing for a long time. His style is witty and entertaining, and he is a debunker-extraordinaire. His newest book, Gusher of Lies: The Dangerous Delusions of Energy Independence,

is a must-read for anyone interested in energy issues. Concerning the topic of energy and the many myths associated with energy issues, this is a debunker’s bible.

If you aren’t familiar with Bryce, he is the Managing Editor of Energy Tribune, a cornucopia of energy news and analyses (and a regular stop for me), as well as the author of several other books topical to energy. For more, here is his biography from Amazon:

Robert Bryce is one of America’s foremost energy journalists. He is currently the managing editor of Energy Tribune and a contributing writer for the Texas Observer. The author of Pipe Dreams: Greed, Ego, and the Death of Enron,

and Cronies: Oil, The Bushes, and the Rise of Texas, America’s Superstate,

he lives in Austin with his wife, Lorin, their three children, and a hyperactive bird dog named Biscuit.

In the book, Bryce takes on many of the myths that are ingrained in the collective psyche of politicians and the general public. He explains why we are so attracted to the idea of energy independence, but then spends the bulk of the book arguing that the idea of energy independence is delusional. He targets the delusions of both Democrats and Republicans, suggesting that neither major party is serious about addressing America’s energy needs. As Bryce states (and this would be a good description of my own position): “I am neither Democrat nor Republican. I am a charter member of the Disgusted Party.”

Thoroughly researched, with hundreds of references, the book is full of thought provoking and interesting facts. One of the most interesting bits to me was a table showing just how dependent the U.S. is on a wide range of strategic materials. We are at the 100% dependence level on quite a few of them. But the book’s real strength lies in the myth-busting. The book debunks such energy independence myths as: 1). We can farm our way to energy independence; 2). We could abandon the Persian Gulf if we achieved energy independence; 3). Energy independence would reduce the flow of money to terrorists. For a flavor of Bryce’s writing – including some of the themes he tackles in the book, see his Washington Post editorial:

In this editorial, Bryce writes:

This may all be good politics. But the idea that the United States, the world’s single largest energy consumer, can be independent of the $5 trillion-per-year energy business — the world’s single biggest industry — is ludicrous on its face. The push for energy independence is based on a series of false premises. Here are a few of the most pernicious ones…

While you will often find yourself nodding in agreement while reading the book (or thinking “I did not know that”), there will be things in the book you disagree with – and perhaps sharply. You may raise your eyebrows at Bryce’s assertion that energy independence is not desirable. I read that, and I thought “Not achievable any time soon? Sure. But not desirable?” Some won’t like his take on Peak Oil. Some will feel that some of his writing on terrorism is a digression. I disagree with him on the subject of carbon taxes (more on that below). And corn ethanol supporters will need to round up an army of lobbyists to address his chapter on ethanol.

The ethanol chapter alone is greatness. [Full Disclosure: Bryce referenced me a number of times in the book, but especially in the ethanol chapter. You could thus argue that I have a conflict of interest in this book review – if that makes you happy ;)]. Bryce goes further than I ever have by tying all of the arguments up in one neat package. He covers the subject from angles I have barely touched upon. I can probably now retire from ethanol debunking, because after reading the ethanol chapter I thought “There’s nothing left to debunk.” (In fact, progress on the ethanol FAQ I have been working on ground to a halt after I read Bryce’s ethanol chapter. He covered everything I covered, and more.)

This is not a Peak Oil book. Peak Oil is covered over just a few pages, and the subject is treated agnostically – or maybe even slightly atheistically. The Oil Drum does get a mention in this section, as well as peakoil.com and hubbertpeak.com. But if you are expecting a long discussion of peak oil, that’s not what this book is about.

There was a time when I couldn’t see an iota of difference between Bryce’s positions on various energy topics and my own. It seemed we agreed on everything – right down to small details. However, Bryce gradually abandoned his position that we needed higher carbon taxes, and this is an issue upon which we now clearly diverge. And it took me a while to really pin down why we now disagree on this issue.

I am looking at the issue of carbon taxes through Peak Oil lenses. I see carbon taxes as a way individuals and individual countries can ramp down their energy usage so they are less impacted by supply shocks. I think Bryce is less concerned about these sorts of supply shocks, and is looking more at policies that will increase energy supplies, rather than those that reduce demand. This became clear to me when reading his chapter on energy efficiency. Bryce also feels like it will be impossible to make the tax revenue neutral such that it isn’t regressive. He feels like the U.S. will be putting ourselves at a competitive disadvantage to the rest of the world if we pass higher carbon taxes.

However, to that I say that Europe already has very high carbon taxes, and I don’t believe it is a coincidence that they drive much more fuel efficient cars, don’t have a lot of suburban sprawl, have excellent public transportation, have about half the per capita energy consumption of the average American, and yet still enjoy a very high standard of living. They are more insulated from price shocks than we are, because they are less dependent on fossil fuels than we are in the U.S. But because of the fossil fuel usage habits of the U.S., enabled by a long history of cheap fossil fuels, the world will approach peak oil much more quickly. I see high carbon taxes as a way of slowing down that approach and subsequent decline.

Furthermore, I don’t believe Bryce is consistent on this issue. At one point in the book, he writes “Motorists respond to high fuel prices”, and then he gives examples of how sales of fuel efficient vehicles have taken off as fuel prices crept higher. Isn’t this something we should have been encouraging all along with higher fuel prices? He reiterates this in a section on Brazil, when he points out that Brazil imposes much higher fuel taxes, and this helps explain why their per capita usage is so low. If Brazil can deal with higher fuel taxes, I expect that we can as well in the U.S.

Concluding, I highly recommend this book. It is the best overall book on the reality of the energy situation in the U.S. that I have read in a long time. In fact, specific to that topic, it is probably the best book I have ever read. There are some minor errors (e.g., Saudi’s claimed oil production capacity was reported as their oil production), and even after reading the book I still feel the attraction of energy independence. But I didn’t find a whole lot to quibble with as I read the book.