While the story describes an actual issue of concern (more on that below), the headline helps promote a widely-held, but false belief. The oceans aren’t actually acidic. They are alkaline, or basic.

In chemistry, pH is a measure of how acidic or basic a solution happens to be. Pure water has a pH of 7.0. A solution with a higher pH than 7.0 is considered basic, or alkaline, and one with a lower pH is acidic.

Lemon juice, for example, is acidic. Antacids dissolved in water are basic. They are used to neutralize an acidic solution.

The pH of the oceans is above 8, which makes it fairly basic. As someone with a chemistry degree, when I envision something that’s “so acidic”, as the CNN headline describes, I think of something like vinegar, with a pH of 2.5. That’s pretty acidic. I certainly don’t imagine something with a pH above 7.0.

To me, it’s sort of like letting the temperature of my coffee drop a couple of degrees below boiling, and then declaring it to be “so cold.” Most people would be left with the wrong impression if I described my coffee’s temperature that way.

So What is Going On?

There is a real issue of concern here, but it’s a bit more complex than envisioning acidic oceans.

Over the past couple of centuries, atmospheric carbon dioxide has steadily risen. Prior to the Industrial Revolution, the atmospheric CO2 concentration was about 280 parts per million (ppm). Today it is around 412 ppm and steadily rising.

But the oceans also have a tremendous capacity to absorb CO2. As that happens, CO2 can react with water to form carbonic acid (H2CO3). This is what is known as a weak acid, and its formation from rising CO2 emissions is what is commonly called “ocean acidification.”

I still recall the first time I heard the term ocean acidification. I thought “Oh my gosh! I wonder how acidic the oceans have become.” Then I checked the actual data, and I was surprised by what I learned.

Because the ocean is basic, what is happening is that as CO2 is converted to acid, it is slowly neutralizing the ocean (exactly opposite of how an antacid functions). The process is gradually dropping the pH from basic (~8.1) in the direction of 7.0, which would be neutral. But “ocean neutralization” really doesn’t convey that there is a problem, which is why I assume “ocean acidification” was chosen as the term to describe this phenomenon.

The graphic below from the National Oceanic and Atmospheric Administration (NOAA) illustrates what’s happening. 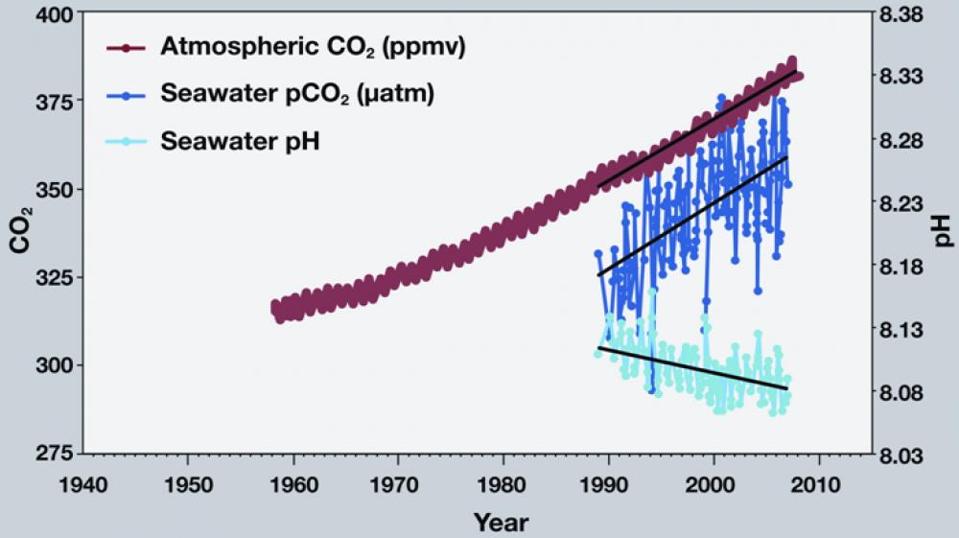 The upper line shows the atmospheric CO2 concentration, while the darker blue is a measure of the concentration of the CO2 in seawater. The lower trend shows the gradual decline in the pH of seawater, which has declined from about 8.13 in 1990 to about 8.06 today.

But the phrase ocean acidification has led many to believe — as that CNN story headline implies — that the oceans are acidic. They are not, nor are they likely to become acidic.

Note that I am not downplaying the impact of a change in the pH of the oceans. Some organisms that are adapted to a specific pH — no matter what it is — may be significantly impacted by even small pH changes. The CNN story accurately describes that the falling ocean pH is presenting a problem for Dungeness crabs. But it’s not because of an ocean that has become acidic.