A couple of years ago, I wrote an essay that ultimately turned out to be very controversial:

Why We Will Never Address Global Warming

That same essay published at The Oil Drum received 560 comments, and was until recently the most-commented upon post in The Oil Drum’s history. Global Warming/Climate Change is a topic that people get very emotional about, and the idea that I claimed that we would never address it didn’t sit well with a lot of people.

Now I know that I have some global warming skeptics here. And I have said many times that I am fine with that, but I don’t want to engage in that debate for multiple reasons. And in the hopes that I can focusing this essay, let me say what I really mean: We won’t stop rising atmospheric carbon dioxide concentrations. If you want to argue that increasing carbon dioxide is not resulting in climate change, fine. But I think we can all agree that carbon dioxide concentrations are steadily increasing in the atmosphere. In fact, one of the key monitoring stations is here in Hawaii at Mauna Loa, which I can see clearly from my house.

The reason I don’t believe we will stop accumulating carbon emissions is that this is a global issue, and people around the world are going to generally gravitate to the cheapest source of fuel they can find. So, many of the world’s countries can sign a well-intentioned protocol in Kyoto, but then China plans 562 new coal-fired power plants. Carbon emissions continue unabated, despite Kyoto.

This week I saw a new article by Lester Brown – author of the “Plan B” series, the most recently published version of which is Plan B 4.0: Mobilizing to Save Civilization.

In his article, Brown observed that the U.S. has had major reductions in carbon emissions:

For years now, many members of Congress have insisted that cutting carbon emissions was difficult, if not impossible. It is not. During the two years since 2007, carbon emissions have dropped 9 percent. While part of this drop is from the recession, part of it is also from efficiency gains and from replacing coal with natural gas, wind, solar, and geothermal energy.

The U.S. has ended a century of rising carbon emissions and has now entered a new energy era, one of declining emissions. Peak carbon is now history. What had appeared to be hopelessly difficult is happening at amazing speed.

For a country where oil and coal use have been growing for more than a century, the fall since 2007 is startling. In 2008, oil use dropped 5 percent, coal 1 percent, and carbon emissions by 3 percent. Estimates for 2009, based on U.S. Department of Energy (DOE) data for the first nine months, show oil use down by another 5 percent. Coal is set to fall by 10 percent. Carbon emissions from burning all fossil fuels dropped 9 percent over the two years.

All of that may very well be correct. But China and India continued to build new coal plants. Demand for oil around the world remained high. And the result so far is that the monitoring station on Mauna Loa shows absolutely no sign that global carbon emissions have been impacted by this sharp drop in U.S. emissions. In fact, the most recent measurements show the highest atmospheric concentrations that the observatory has ever measured: 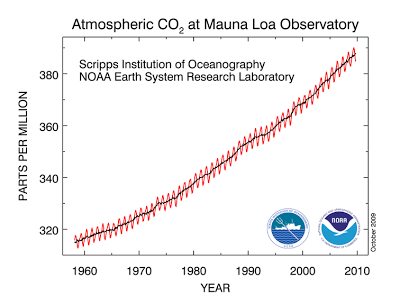 This is one of the reasons I have never focused my time on carbon emissions. I just can’t see that anything the U.S. does or that I can advocate is going to really impact global emissions. Sure, we may reduce our carbon emissions in the U.S. But there is a long line of countries waiting to use that fossil energy that we don’t use. So I think the best we could hope for is to slow the accumulation rate. But I think the atmospheric concentration will continue to rise until fossil fuels start to run out. That’s the only thing I think will permanently rein in carbon emissions.

Let me be clear that this has nothing to do with what I would like to see happen. The reason the essay was so controversial at The Oil Drum was because some people perceived my attitude as “I don’t care about climate change.” That’s not it. This is just the way I see things playing out.

I have instead chosen to focus my efforts on changing the forms of energy we use. There is of course some synergy with those who are working to reduce carbon emissions. We both would like to see expanded use of alternative energy. For me, this is about energy security. Increasing the locally produced energy should help insulate against future energy shocks. This would also reduce localized carbon emissions.

But I don’t expect this to impact the global carbon emissions picture. If that was my goal, I think I would be very frustrated by that Mauna Loa graph. I see no reason to believe that picture will change in the next few years. But I am optimistic that we can continue to develop some alternative energy options that enhance energy security for specific locations that have limited fossil fuel resources. I think those countries with ample fossil fuel resources will continue to burn them, though, which is why I think the focus on carbon emissions is ultimately futile.

49 thoughts on “A Massive Decline in Carbon Emissions?”