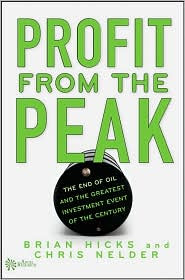 One of the threats from peak oil is the potential for financial ruin as oil prices run up. If you were invested in airline or automotive stocks through the recent run up in oil prices, you have probably seen those investments lose a lot of value. If, on the other hand, you were invested in oil futures, oil companies, or oil field service companies – you have probably seen those investments gain ground even as the overall stock market slumped. The idea of profiting from the peak – an event that is likely to cause misery for those who are least prepared – may seem an odd combination. It almost feels like “Profit from Homelessness.” But the reality is that unless you understand how energy prices affect the prospects of various sectors, you are placing yourself at a financial disadvantage.

Thus Profit from the Peak

– the new book co-authored by my friend Chris Nelder – was destined to spark a lot of interest. Chris and I agree on most things energy-related, but we do also have some areas of sharp disagreement. In this review, I will explain what I liked about the book, but I will also detail my differences. Consider this a partial review, and a partial commentary on some of the particular topics in the book. Do not consider my comments as investment advice.

First off, The Oil Drum was referenced a great many times in the book. The work from many of the regular contributors was featured in the book. The first chapter was an introduction to peak oil, and it argued that peak oil is upon us. The information in the first chapter will bring a person up to speed on the potential problems we are going to experience from peak oil, but it also provides background information such as how oil is formed and subsequently refined.

Moving on to Chapter 2, the book gives a good explanation of oil depletion, and provides a nice overview of the major oil producing countries. But it also brings up the first area of disagreement that I had with the book – and that is valuation of oil companies. As the book states when talking about investing in blue chip oil companies, “we wouldn’t touch most of them with a five-mile drilling rod.” I have a different opinion.

Theirs is not an unusual argument: Oil companies are seeing their reserves and production rates decrease, and therefore their stock values are bound to follow. But let’s consider the case in which a company sees a 5% drop in their oil production rate, and yet the price of the remaining oil they are producing increases by 50%. This is not too far off the mark from what we have seen happen. What has been happening – and what I think will continue to happen – is that prices will rise faster than production rates will drop. That means that the value of an oil company’s reserves will increase year after year, even as their production rates decline. The argument that oil companies won’t weather peak oil very well discounts (or ignores) this.

Thus the value of COP’s oil reserves has more than doubled in the past year and a half, even though production has fallen by a little over 5%. (Note that this comparison is approximate, as the majority, but not all, of the BOEs are from oil). Further, the total value of COP reserves at today’s average crude price is $1.3 trillion – and I think prices are going higher in the long-term. The market cap for COP is about 1/10th of that at $142 billion. The market is seriously discounting the run-up in prices when evaluating oil companies like COP. Each $1 gain in crude prices increases the underlying value of COP’s reserves by $10 billion. Yet you could buy COP a year ago – with oil trading at $60/bbl, for only 20% less than the current price. Investors must expect that oil prices will fall back to the $80 range.

However, there are two caveats to consider when evaluating oil companies. One is that governments are bound to intervene as oil company profits continue to rise. If oil goes to $200 and then keeps rising – Big Oil is going to make a ton of money. Government are going to be under pressure from upset citizens to do something about this, and they will likely put various sorts of windfall profits taxes into effect. There will also be calls to nationalize, but the oil companies would likely just move to friendlier countries.

The second caveat is that the trend of falling production can’t continue forever. At some point, the oil companies are going to have to make some strategic decisions and become much more diverse in their energy offerings. But since prices have been rising faster than production is falling, they are likely to have loads of cash for getting into other energy businesses. It is admittedly an atypical investing situation – negative production growth combined with sharply higher revenue growth. But unless you think production is going to fall faster than prices will rise, I think oil companies are a pretty safe bet.

The other area that Chapter 2 missed on was the situation with refiners. While negative on Big Oil, the book was very bullish on refiners such as Tesoro (TSO) and Valero (VLO). Quoting from the book “Valero and Tesoro are going to make a pretty penny every hour they operate their refineries.” Of course that depends on one very important issue: The ability to maintain decent crack spreads. Unfortunately for pure refiners, softening demand has prevented them from increasing gasoline prices at the same rate that oil prices have gone up. As a result, refining margins have been crushed. Big Oil has the advantage of being able to absorb soft refining margins. After all, they are currently producing and selling oil for $130 a barrel. Valero, on the other hand, is buying oil for $130/bbl. As a result, in the past 12 months Valero has seen their stock fall by 40%. Over the same time period COP has seen share prices rise by 21% (and in the past 5 years, COP shares have increased by 240% – not bad for a Blue Chip).

Chapter 4 makes the case that the true cost of oil – when the negative externalities are factored in – is $480/bbl. I have only minor quibbles there, and in general agree with the overall point. I found Chapter 5 – The Pentagon Prepares for Peak Oil – to be a very interesting read. I had never really thought about it, but the book points out that the U.S. Department of Defense is consuming well over 100 million barrels of oil a year – the most of any government agency in the world. Imagine what $130 oil is doing to defense budgets. This chapter also makes the pertinent point that we have outsourced a lot of our manufacturing – and therefore our CO2 emissions – to China. Thus, it is hypocritical of us to blame the Chinese for their fast-growing carbon emissions.

Part II of the book is “Making Money from the Fossil Fuels that are Left.” This section was generally a good, fact-filled read. The information on methane hydrates was quite interesting. The book stated that the U.S. possesses methane hydrate reserves equivalent to 56 trillion barrels of oil. Of course it will be a difficult prospect to extract them commercially. This section also put oil shale claims into perspective, pointing out something that has long been apparent: Break even is a moving target, and it tends to move up along with oil prices. I have noted this for years, but I never defined it with a catchy name like the Law of Receding Horizons. Oil shale always seems to be economical at the current price plus $10-$20/bbl.

I did find inaccuracies in this section. For the layperson, most of these are trivial. But if you think about energy most of your waking hours, some of the inaccuracies will feel like an itch that needs to be scratched. For instance, on Page 96, natural gas is described as a mix of methane and propane. Propane was probably a typo, as natural gas is primarily methane and ethane. Page 109 states that ExxonMobil shelved their $15 billion LNG plant in Qatar. That was actually a proposed GTL plant. And on Page 117, the book states that diesel produced from CTL emits twice the volume of greenhouse gases as normal diesel when you burn it – and another ton of CO2 per barrel when you make it. That’s a misstatement. CTL diesel produces exactly the same CO2 emissions as normal diesel (after all, it is chemically the same as regular diesel) when you burn it. It is the production process of CTL that causes the overall carbon footprint to be so high.

There were two comments on tar sands that I disagreed with. One is on Page 127, and states that the total net energy gain is only 5 or 10%. That would make it worse than corn ethanol. Yet on Page 122, the EROI for tar sands was stated to be “as low as 5.” An EROI of 5 indicates a net energy gain of 400% (invest 1 unit, get 5 back, the net is 4 and the net gain is 400%). The second disputed argument is that tar sands must be totally dependent upon natural gas, or the construction of dozens of new nuclear plants. Thus the conclusion is that tar sands can’t scale up much. But if in fact the net energy return is 400%, the solution is easy. If you don’t have natural gas, you cannibalize and burn part of your production to drive the process. That will be an economic decision, but will become more attractive as natural gas supplies deplete and drive prices up. (Note that this isn’t an endorsement of tar sands production, as I agree with the book that there are many environmental concerns surrounding the process).

The last and final section of the book, Part III, was Energy after Oil. I particularly enjoyed the section on geothermal power, as I think this alternative option doesn’t get enough coverage. The book did a good job of clearly explaining how geothermal works, and identified some potential investments in the sector. This section also does a good job on wave and tidal energy, takes on the hydrogen economy, makes strong arguments in favor of carbon taxes, and argues that the future will be electric.

Again I found some nits to pick about the biofuels coverage. On Page 142, it is stated that biodiesel can be used as a 100% blend. However, there are no warnings about the cloud and pour point issues surrounding straight biodiesel. Try running straight biodiesel in very cold weather, and you could end up with a frozen tank of fuel. I had a few minor quibbles around the ethanol section (Despite the hype, Brazil does not get 40% of their motor fuel from ethanol!), but overall I thought Section III was the strongest section of the book.

While I found some areas of disagreement, I found the book to be enjoyable to read, and I learned a few new things that I didn’t know. Anytime I can do that, I am happy with a book. Those new to peak oil will especially get a lot of value out of the first section; those who know about peak oil will enjoy the latter parts of the book. Finally, each person will probably find that they disagree with one or more of the investment recommendations. That’s bound to any time financial advice is being offered. But you will also find lots of little companies you never heard of – but are worth investigating.

Note: I don’t consider myself to be an expert in investing. While I haven’t done too badly, my style works for me, but it may not suit you. I am a buy and hold, long-term investor. So please don’t write and ask for investment advice. I will not give it, and if you invest in a company that I mentioned in a favorable light, you are on your own.

16 thoughts on “Book Review: Profit from the Peak”