Thanks to a reader for calling this story to my attention. I will be spending most of my time in the U.S. by summer, and I think I am going to have to get a car. Right now, I don’t own a car, and am happily biking to work. 🙂 While biking is the national pastime in the Netherlands, I fear this is not a good option for Dallas. 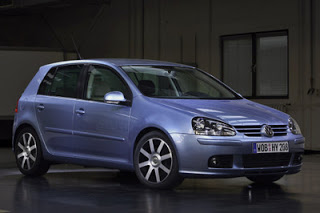 I had just about decided on a Toyota Prius – because it gives me the best possible compromise between something I can haul the family in, and something that gets great gas mileage (EPA-estimated 46 mpg). I really couldn’t find anything else that came close. (Suggestions are welcome, though).

But the Prius will soon have a worthy challenger. Volkswagen has announced that they are building a diesel hybrid Golf that gets 70 mpg. Wired reports:

According to a Google translation of Germany’s Auto Bild, the potential Prius killer sports a 74-horsepower three-cylinder TDI engine — Autoblog speculates it’s the 1.4-liter used in the Polo BlueMotion — mated to a 27-horsepower electric motor and a seven-speed double-clutch DSG transmission. There’s a nickel-metal hydride battery in the trunk; a regenerative braking system helps keep it charged. The car has stop/start capability and a full-electric mode at low speed. An “energy monitor” display on the dashboard keeps tabs on what the powertrain is doing.

According to Auto Bild, the hybrid Golf will get 69.9 mpg and emit 90 g/km of carbon dioxide. An earlier report by Britain’s Auto Express said 89 g/km, but either way that’s less than the 104 g/km emitted by the Prius and 116 emitted by the Honda Civic Hybrid.

When can I buy one? Well, there’s the rub. Reports are that they are expected to be on sale in Europe at the end of 2009, but no details of when it might be released in the U.S. (Although that link does say that it will meet California’s stringent air emissions standards).

Looks like I will just have to get that Prius, unless someone can suggest something better.