Well, we got that big surprise, primarily because crude imports were sharply down from last week. Some excerpts:

Updated: As oil stands again at the cusp of $100, here is what analysts expect for this week’s report report:

Analysts surveyed by Dow Jones Newswires, on average, predict that crude oil inventories rose by 800,000 barrels last week, while refinery use grew by 0.4 percentage point to 88.1 percent of capacity.

While oil supplies likely rose last week, prices were being supported Tuesday by concerns there would be a bullish surprise in the EIA report, such as an unexpected decline in inventories.

If we see that unexpected decline, then WTI should break $100.

Last week, I noted that even though there was a very big surprise with respect to crude inventories, the market seemed slow to react. I indicated that it may have just been an artifact, and that was in fact what it turned out to be. I get my quotes from the NYMEX site, and those quotes are delayed by 15 minutes. So, no opportunities to make money as a result of a slow-moving market. Actually, I would have been stunned if traders weren’t poised to react to a large surprise in the report, but it seemed as if they weren’t. That’s why I posed the question.

In fact, someone posted a very interesting graph that suggests that in fact the movement in price happened prior to the release of the report: 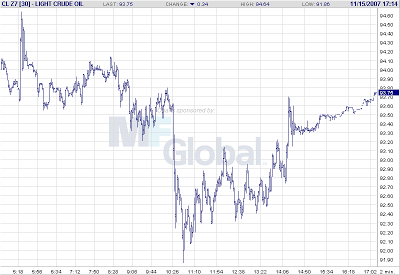 I know that graph is hard to read. Here is the link for the original graphic, in case you want to see the fine details. What it looks like is that about 4 minutes prior to the release of the inventory report, the price rapidly dropped over $1/bbl, implying that contracts were being dumped. This could of course be innocent; someone could have rolled the dice and guessed that the report would be bearish. That could also be due to the resolution on that graph (i.e., what you see above may have actually happened just after the report’s release).

But for a suspicious person like me, I started wondering about just how many people have access to this data. It would be very lucrative to sell some advance information, so I am curious as to how the EIA safeguards the early release of the numbers. How many people know the numbers before they are released? What safeguards exist to prevent someone from selling the information? Do any of the EIA’s employees drive a Ferrari? (kidding)

I asked Doug MacIntyre, author of This Week in Petroleum, if he could comment on this. Doug wrote:

EIA understands completely the seriousness of our data and carefully safeguard it before it gets released. We know that a lot of money can be made if the data were known prematurely, and everyone involved is very careful not to divulge ANY information to ANYONE before the release. In fact, we even go a little farther and try not to comment on the data to the press until at least 1 hour after the data are released. I am confident that the data were not, and have not been compromised.

EIA will not discuss the specific procedures we do to safeguard the data or divulge the number of people that have access to the data, as we believe that any information regarding the procedures we follow should be safeguarded as much as the data.

Thanks for explaining that, Doug.