“We stand, in most places on earth, only six inches from desolation, for that is the thickness of the topsoil layer upon which the entire life of the planet depends.” R. Neil Sampson in Farmland or Wasteland: A Time to Choose

One of my interests, dating back 25 years to when I was a member of my local FFA land judging team, is soil conservation. I have long been interested in things like terra preta and composting because of their ability to build topsoil. But I never thought much about how difficult it can be to build up topsoil until I read Kim Stanley Robinson’s Mars Trilogy – Red Mars, Green Mars and Blue Mars

(great books, by the way). The books trace a future hypothetical terraforming of Mars, and one of the major difficulties the characters face is producing topsoil on the planet. It was then that my interest in the mechanisms for topsoil erosion and topsoil production greatly increased.

While I would eventually like to get some experience with producing terra preta, earlier this year I got a flyer from Waste Aware Scotland for discounted composters. So, I bought one, and started to experiment. I wish I had done so years ago, because it has really been a fascinating exercise.

I got the larger 330 L (87 gallon) model shown above and started dumping all things cellulosic into it. There is quite a little tropical ecosystem inside the composter. Even when it is cold outside, the waste is always steaming. And not only has it attracted numerous earthworms, but there are beetles, slugs, and lots of insects I haven’t been able to identify. Besides being an interesting science experiment, there are major environmental benefits from composting. According to the most recent newsletter from Waste Aware Scotland:

• It reduces waste sent to landfill

Scotland produces 900,000 tonnes of organic waste a year. That’s enough to fill Hampden Stadium more than 18 times. We could divert a large amount of organic waste from landfill by using it for home composting.

Organic waste sent to landfill cannot decompose properly because it doesn’t have access to air. As a result, it produces methane, which is a powerful greenhouse gas that contributes to global warming.

Compost improves soil, so plants in your garden become healthier and more pest and disease resistant. They will produce better fruit and vegetables and more beautiful blooms.

As I explained to my daughter, who recently told me she wants to become more environmentally responsible, there are two ways in which composting combats global warming. The first is the reduction of anaerobic digestion, which results in methane production as explained above. Because methane is such a potent greenhouse gas, this is not something you want occurring in an open landfill. But the second benefit is that home composting reduces the mass of material that would be transported (via fossil fuels) to the landfill. So home composting is much more environmentally responsible than throwing your waste in the trash.

So, what can you compost? Again, referring back to the newsletter:

If you start to segregate your garbage, you will find that these items make up a substantial portion of what would normally go to the landfill. 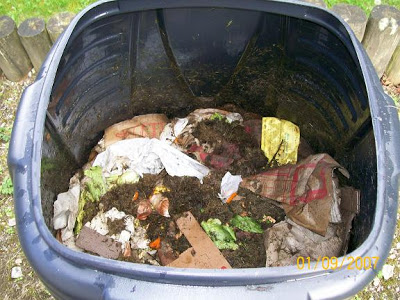 Inside My Composter – Yuck

In the picture above, the composter contains about 30 gallons of composting material. But I have filled it to the top at least 10 times and haven’t taken anything out of it. In other words, that 30 gallons of material was originally around 1,000 gallons. It is amazing how much the volume is reduced as it decomposes. But that also goes to show how much material it takes to produce an inch of topsoil.

So get yourself a composter

(or make one) and do a bit more for the environment. You may even find that you enjoy it.

25 thoughts on “My Composting Experiment”