Here’s why oil prices surged this week to the highest levels since the price crash of 2014.

Oil prices rose last week to the highest levels since 2014. What was behind this price surge? Ironically, it was an announcement by OPEC that it would increase production.

Oil prices had weakened over the past month following a call from President Trump for OPEC to increase production in response to rising oil prices. After rising above $70 per barrel in May, the price of West Texas Intermediate (WTI) had dropped back to $65/barrel leading up to OPEC’s June 22nd meeting.

It was widely anticipated that the group would decide to bump output at the meeting. At the meeting’s conclusion, OPEC, in agreement with Russia, announced that it would increase production for the first time since implementing production cuts in November 2016.

But WTI rallied by more than 4% following the announcement. Why? Because the market was underwhelmed by OPEC’s decision.

OPEC announced that it would restore about one million barrels per day to the market, beginning this month. Iran had opposed the move, partially in protest of sanctions from the Trump Administration. In reality, the output increase isn’t expected to exceed 700,000 barrels per day because some members are already pumping at maximum capacity.

Further, this output increase won’t be enough to balance the oil market. The most recent Oil Market Report (OMR) from the International Energy Agency (IEA) projected the amount of oil that would be needed by OPEC through 2019 in order to balance the markets: 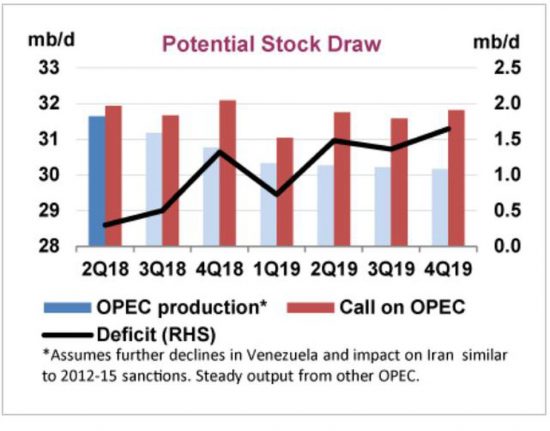 By the end of this year, the call on OPEC is expected to be nearly 1.5 million BPD more than they were forecast to produce. Thus, even if OPEC managed to follow through on the full output increase, it would be insufficient to prevent further declines in global crude oil inventories. Expectations that this production increase won’t be enough to stabilize these inventory levels are the primary driver behind last week’s oil price surge.

Oil prices surged again on news that the U.S. was pressuring its allies not to import oil from Iran, lest they risk sanctions. Iran currently exports 2.9 million barrels per day of crude oil and condensate to Asian and European markets. Even if there is modest compliance with this Trump Administration request, it could accelerate the depletion of global crude oil inventories. That would likely drive oil prices even higher.

That would also make U.S. oil producers happy. Refiners, on the other hand, would likely suffer. Higher oil prices erode the margins of refiners, resulting in lower profits. So even though refiners welcomed the news on biofuel mandates, the spike in oil prices will probably have a bigger negative impact on earnings in the short term.