I was talking to my wife on the phone yesterday, and she asked what I knew about the 2009 Prius. I asked what she was talking about, and she started telling me about some of the features. She said that Toyota has been keeping the details pretty quiet, but details are available. Actually, I think it has come up here a couple of times, but here’s a picture: 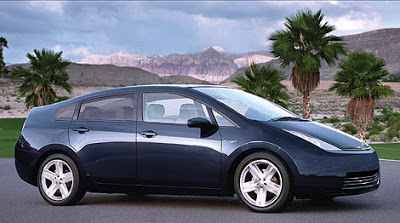 There have been some pretty big claims about fuel efficiency:

Auto Observer reports that the next generation of Toyota’s wildly successful Prius hybrid “is coming soon and will launch at the Detroit auto show in January 2009.” The car will be “a touch bigger so offering more space. It will come with stronger 1.8-liter hybrid performance yet at the same time boast even better economy and class leading emissions, if early word is correct.” The Prius will feature “a bigger 1797 cc four cylinder gas engine to cope with the bigger body and counter criticism in some quarters of the weedy performance of the current 1.5,” boosting the total output of the car to 160 horsepower (up from the current 110). Sources say Toyota rates the new configuration for 94 mpg.

The New York Times also had some recent coverage:

A third generation of the Toyota Prius gas-electric hybrid car has been eagerly anticipated. Though Toyota has not officially announced when the redesigned Prius would appear, unofficially, automotive journalists had been tipped to expect it sometime in 2008, as a 2009 model.

However, news reports from Japan last week said the car has been delayed by at least six months, to early 2009.

Whether the delay is real or not, it appears that the battery problems are plenty real. Previously, Toyota set a goal of reducing the size of the battery pack in the next Prius by 50 percent, while also increasing its efficiency.

The delay is apparently to give Toyota engineers time to retro-fit the new Prius design with the old-style nickel metal hydride batteries they’d hoped to be rid of. At least initially, the new Prius will still have nickel metal hydride batteries, Nikkan Kogyo reported. Lithium ion power is not ready for prime time (remember all the exploding laptop batteries made of the same substance?). Lithium ion gets unstable under extreme pressure – apparently too unstable for automotive use at this stage of its development.

I am going to try to hold out until the 2009s come out before I get another car. I think I can manage that, and I am really intent on getting one of these new, ultra-high mileage vehicles.