I think the general consensus was that the recent claims of agricultural researcher J.C. Bell don’t appear to be too compelling. However, as I mentioned, the conversion of biomass into oil or gasoline should be technically achievable. And today, Bob Rohatensky sent me a link to a story that would appear to have a little more meat to it than Bell’s claims: 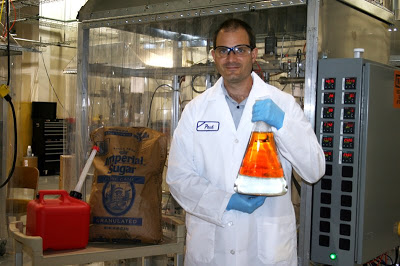 The collaboration could herald the availability of new biofuels that can be used at high blend rates in standard gasoline engines. This could potentially eliminate the need for specialized infrastructure, new engine designs and blending equipment.

Virent’s BioForming(TM) platform technology uses catalysts to convert plant sugars into hydrocarbon molecules like those produced at a petroleum refinery. Traditionally, sugars have been fermented into ethanol and distilled. These new ‘biogasoline’ molecules have higher energy content than ethanol (or butanol) and deliver better fuel efficiency. They can be blended seamlessly to make conventional gasoline or combined with gasoline containing ethanol.

The sugars can be sourced from non-food sources like corn stover, switch grass, wheat straw and sugarcane pulp, in addition to conventional biofuel feedstock like wheat, corn and sugarcane.

The companies have so far collaborated for one year on the research. The BioForming(TM) technology has advanced rapidly, exceeding milestones for yield, product composition, and cost. Future efforts will focus on further improving the technology and scaling it up for larger volume commercial production.

“The technical properties of today’s biofuels pose some challenges to widespread adoption,” Dr. Graeme Sweeney, Shell Executive Vice President Future Fuels and C02 said. “Fuel distribution infrastructure and vehicle engines are being modified to cope but new fuels on the horizon, such as Virent’s, with characteristics similar or even superior to gasoline and diesel, are very exciting.”

This also reiterates what I have said before: Thermochemical processes such as this are an area to watch. There would be multiple advantages over biological processes for producing fuels. Something tells me that Shell will find this more fertile ground than their investments in Iogen.

11 thoughts on “Biogasoline from Shell”