The Essay I Didn’t Want to Finish

While I wrote about the potential for biobutanol in that essay, I also noted:

I need to spend some time going over the patents and linked reports more closely to see if anything suggests a problem that has been glossed over.

When I first started this essay, I was going to review the literature and outline what I felt needed to happen to make biobutanol a reality. Furthermore, since butanol is about 8% soluble in water, I was going to write that a real holy grail would be to find a microorganism that can tolerate 8% butanol, or one that produces a higher alcohol – one that is completely insoluble in water. That would allow the alcohol that was produced to phase from the water, and eliminate the energy intensive distillation that is typically required. That’s what I was going to write. However, reality intervened.

Just for completeness, here is what I had originally written:

There has been much press lately about the potential of butanol as an alternative fuel. As I have mentioned before, I spent many years as an engineer in butanol units in Texas and in Germany, and I have received a patent for a butanol process that I invented while working in Germany.

Butanol production via petrochemicals is a very straight-forward process. Once the petro-process was invented, it put the bio-process (ABE) out of business. My guess is that due to the nature of biological processes, the product from the ABE process contains copious amounts of water [I was right]. In contrast, the petrochemical process generally contains product with only 5-10% water. Therefore, the energy requirements for purification are much lower for the petrochemical process.

If butanol could be produced without having to purify it via an energy-intensive distillation, the energy return would be much higher and the costs should be lower. If butanol was completely insoluble in water, for instance, it would float to the top as it was produced and it could just be skimmed off. However, butanol is about 8% soluble in water, which means it won’t start phasing until that concentration is reached. And for a biological process, 8% butanol would most likely poison the microorganisms that were producing it.

However, longer-chain alcohols – pentanol, hexanol, hetpanol, etc. – are essentially insoluble in water. These alcohols would phase out and float to the top as they were produced. Separation would be a snap.

The major problem with butanol is that it doesn’t start to phase out of water until the concentration reaches about 8%. If there was a yeast-based process for butanol that could tolerate concentrations higher than this, you would have the makings of a very cost effective process. Do the fermentation, and then just skim off concentrated butanol. This would be much more energy efficient than a distillation.

While butanol is absolutely a superior fuel to ethanol, the production of butanol from microorganisms is a problem. As I was dreaming about pushing concentration to the point that the butanol starts to phase out, a little research showed the current status quo. Here was the first reality check:

Significant improvements in acetone-butanol (AB) fermentation by Clostridium acetobutylicum must be achieved before it can become an economically viable industrial process (8, 12). Key factors which contribute to the elevated costs of fermentative production of acetone and butanol are the low product titers and low product selectivity. Butanol inhibits cell growth even at relatively low concentrations, and its final titers are limited to ca. 13 g/liter. This and the low product selectivity (i.e., the production of more than one product) result in increased costs for product separation. In addition, continuous cultures have been of limited applicability because solventogenic clostridia degenerate under continuous-culture conditions; that is, they stop producing solvents. (1)

13 grams per liter is about 1.3% butanol. While we can expect improvements in the technology, the yield needs to go up by almost an order of magnitude to keep the distillation energy (and costs) reasonable. It has been demonstrated that you push the conversion to a high level with extreme dilution, but such an approach is simply unworkable from an economical or energy return viewpoint. I won’t address the paper in-depth – I leave that up to others for now – but you can see the dilution approach taken in the paper that is basically responsible for the current biobutanol craze in which 2.5 gallons of butanol per bushel of corn was claimed:

Effects of Butyrate Uptake and Long-term Stability of a Fibrous Bed Bioreactor on Continuous ABE Fermentation by Clostridium acetobutylicum (They have taken this link down; the journal probably complained about them providing the paper for free).

Here is a graphic that shows the extent of the problem (2): 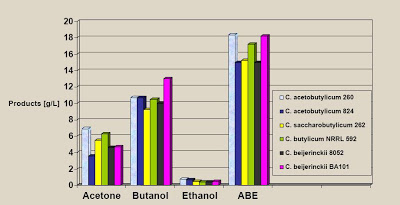 Note that the maximum concentration of butanol achieved was 1.3% for one specific strain. Typical butanol concentrations were just over 1.0%. The total concentration of acetone, butanol, and ethanol amounted to 1.8%. For reference, the petrochemical process produces a product that is somewhere between 85% and 95% butanol. Now you can see why the biochemical process was dropped when the petrochemical process came along. If your objective is merely to produce butanol for some specific application, then the fermentation process can do that – with enormous energy inputs. If your objective is to make fuel with an EROEI of > 1.0, it is nowhere close to being able to achieve that.

Finally, a number of people have written or commented that the work of David Ramey, who runs www.butanol.com, changes all of that. First of all, I certainly don’t want to denigrate Ramey’s work. It is a good contribution. However, it is clear to me that many people do not understand that what Ramey did gets us no closer to cracking the dilution problem. The big hurdle is not a problem of conversion rate or reaction speed. Those are the areas that Ramey addressed, and while those things are nice to have, there is a show-stopper that has not been addressed. That is, if you read Ramey’s patent (which I have done many times), he is still talking about butanol concentrations in the range of 2.5%. That is the problem, not whether the conversion is 25% or 35%.

Butanol is highly toxic to the “bugs”, so it is very difficult to increase the concentration of butanol in the solution. What is needed is a breakthrough that would allow the bugs to thrive at the solubility limit of butanol, which is about 8%. (This would be similar to humans thriving in an atmosphere with 5% oxygen). In that case, excess butanol production would phase out of solution, and separation would be much less energy intensive than a distillation. But you can’t afford to distill off a 2.5% solution of butanol. The energy inputs into the process will be far greater than the energy content of the butanol. I know this from experience. I spent several years as the process engineer in a butanol plant. At a 3% concentration of butanol, we didn’t even attempt to separate it out. Even using relatively cheap (at that time) natural gas, it didn’t make economic sense to extract that butanol. Those levels of butanol were sent to wastewater treatment for disposal.

Believe me, I have a soft spot for butanol. I want to see it work. But right now there are serious issues. That’s not to say that it isn’t worth pursuing. In fact, I am working on it myself. But I have to be realistic.

How about my desire to find microorganisms that could make higher chain alcohols that could be phase-separated?

I would have to check on each one to be sure, but my guess is that even though the higher chain alcohols are essentially insoluble, 148 ng/mL (0.0148%) is not going to phase out. (And even if it did phase out, at those low concentrations the reactor would need to be the size of a football stadium to make useful quantities). I was hoping to find that something in the range of 0.5-1.0% could be produced. However, 1% would require the process to become about 70 times as productive. So, it looks like we will colonize Mars before higher chain alcohols will be produced commercially from microorganisms. (Gasification may still have a shot at doing it economically).

Sad to say, but biobutanol is not remotely at the level the hype implies. While research will (and should) continue, the process is currently at least 10 years from any sort of commercial feasibility. And I would point out that “never” falls under the umbrella of “at least 10 years.”

I would note that one “solution” to the poor EROEI problem would be to use heat from coal or nuclear energy to drive the distillation. You may start with 1 BTU and end up with 0.2 BTUs of butanol, and you will emit a lot of CO2, but it may be economically viable.

63 thoughts on “The Problem With Biobutanol”