I just finished 3 days of survival training with a company in Aberdeen called Falck Nutec. The purpose of the training is to prepare people to survive offshore in the North Sea, and is required before you are able to go offshore in the U.K. or in Norway. A big portion of the course involved learning how to evacuate a helicopter that ditches in the North Sea. What this entailed was being strapped into a helicopter simulator, being plunged under water, and then getting out and to the surface. The pictures below are from the actual simulator I was trained on. 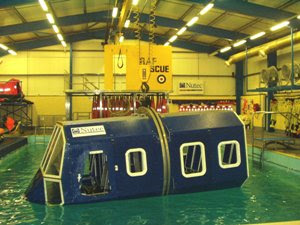 The Helicopter Simulator at Falck Nutec

I had heard horror stories about this simulator. In fact, one guy who had been going out to the rigs for 20 years said it was “a nightmare.” The training consisted of us being plunged under water and escaping from the simulator seven times. Of the seven, three would involve capsizing where we would have to escape from the simulator upside down. 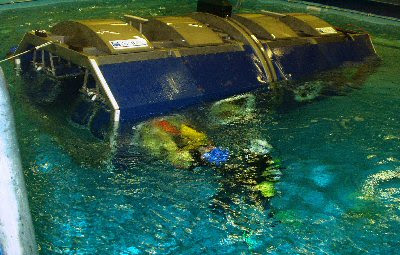 The Helicopter Simulator Being Submerged

Prior to using the simulator, we were taught to use rebreathers. For me, this was worse than the exercise in the simulators. You are already wearing a survival suit, which is tight around the neck (but mine leaked like a sieve). Then you put on a nose clip, so you won’t take water in your nose. Finally, you pop the rebreather in your mouth, and that further restricts the flow of air. I imagine this is somewhat the feeling an asthmatic gets when they are having an attack. Your airflow is restricted, and you feel like you can’t get enough air. I had to take the rebreather out several times before I finally got used to it. It also activated my gag reflex, which also happened to some of the other class members. But after I was finally able to breathe with the rebreather, the helicopter simulation was really a piece of cake.

However, this was not the case for everyone. We had a class of 16, but only 13 finished. One guy showed up drunk for the simulator exercise (he had “a little drink to calm his nerves”) and was dismissed. One left before being strapped into the simulator. And one – who had been panic-stricken throughout other exercises as well – left after surviving a couple of dunkings. I guess he decided he didn’t want to work offshore.

The exercises were supposed to go like this: After your head went under water, you were supposed to slowly count to seven (this is to give the helicopter rotors time to stop moving so they don’t chop you up), push the window out, unsnap your seat belt, and then exit. I had a lot of people who told me they never counted to seven, they just pushed out the window, unsnapped their seat buckle, and exited the window. In fact, there were people in my class who came out as soon as the simulator went under water. But I found that once I had gotten past the gag reflex, it was no problem to stay under water and breathe with the rebreather. I counted to seven, but I could have counted to a hundred. As long as you stayed calm, the exercise was not too bad.

It was more difficult when they rolled us upside down, because you could get disoriented. It was important to keep your hands on the window, because when you flipped, you tended to float away from the window. The worst exercise we did was a flip upside down without the rebreather. The pressure was pretty bad, and my nose filled up with water. Afterward, I developed a tremendous headache and tooth ache (still haven’t quite gotten rid of the tooth ache) as the pressure on my sinuses must have aggravated a nerve.

Here is what it looks like to exit the simulator under water: 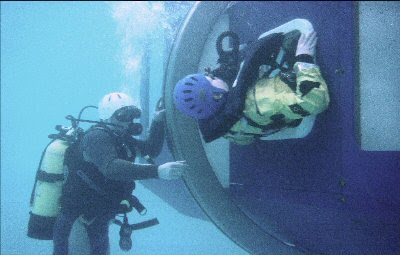 Throughout the course I kept wondering about the likelihood of actually surviving a helicopter crash. I did a bit of investigating, and odds are you are never going to have to use your training in the event of a crash. My guess is that most people die on impact with the water:

SIX offshore workers were killed and another missing feared dead last night after a helicopter belonging to an Aberdeen-based firm ditched into the Irish Sea.

The aircraft, carrying five Centrica employees and two crew, ditched into freezing water 25 miles off the coast between the Isle of Man and Morecambe Bay on the Lancashire coast.

SINCE 1969 there have been more than 30 fatal incidents involving oil rig support helicopters,with more than 110 workers and air crew killed.

Britain’s worst helicopter disaster happened in November 1986, when 45 people died after a Chinook crashed while ferrying oil workers to and from oil platforms in the North Sea.

The twin-rotor aircraft, whose three crewmen were ferrying 44 workers from Shell platforms in the Brent fields, plummeted into the North Sea only two miles and one minute’s flying time from Sumburgh airport, south Shetland. The majority of the victims died instantly in the accident.

Eleven men were killed in February 1992 when a Super Puma helicopter, taking oil workers from Shell’s Cormorant Alpha platform 100 miles north-east of Shetland to the Safe Supporter “flotel” 200 yards away, crashed into the sea immediately after take-off.

In 2002, nine Shell workers and a pilot were killed when a “catastrophic mechanical failure” on one of the Sikorsky S-76A’s main rotor blades caused a crash between two gas platforms 28 miles off the coast of Norfolk.

The worst helicopter crash in recent memory happened on June 2, 1994. when a Royal Air Force Chinook helicopter carrying most of the UK’s senior Northern Ireland intelligence experts, crashed on the Mull of Kintyre, and 25 passengers and four crew members were killed in the disaster.

However, my office is next to the airport in Aberdeen, and these helicopters are taking off every 5 or 10 minutes. So, the odds of being in a crash are very low. After my training, I feel better-prepared to survive a ditching, but it is certainly never something I wish to test my skills against.