I think this is what you call irony. From:

We find the following picture accompanying the article: 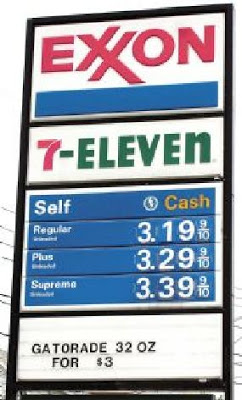 Today’s Bargain: Gatorade at $12 a Gallon

Then from the next story we have a tragic tale of a guy who can no longer afford gas for his 5 Cadillacs:

Robert Mechanic of Sylvania said gasoline’s rising price has put a squeeze on his enjoyment of five Cadillacs he owns.

“It’s too high. I’ve gotta have premium and it’s killing me,” Mr. Mechanic said while fueling one of the Caddies at a Clark station at Dorr and Hoag streets. Premium grade cost him $3.399 a gallon there.

Mr. Mechanic predicted he’ll have to cut back on driving and make more use of “a little small car” he also owns, even though he’d rather partake of his more luxurious rides.

First we have people coping with gasoline prices that have zoomed up to 1/4th the cost of flavored water, and now a guy can’t even enjoy his 5 Cadillacs. What other horror stories can we expect?

19 thoughts on “Irony and Gas Price”