VentureBeat, a Silicon Valley-based site that focuses largely on venture capital (and venture capitalists), has been hosting a series of essays on California’s Proposition 87, which will be voted on next Tuesday. The owner of Venture Beat, Matt Marshall, recently contacted me and asked if I wanted to provide some “No on 87” essays in response to Vinod Khosla’s series of “Yes on 87” essays. My response to Matt was that I am ambivalent about passage, and so would not write a “No” essay. However, he said that if I wanted to write on alleged misinformation coming from the “Yes” camp, then that would be OK as well.

My first essay, Prop 87: Deceptively Marketed, addressed 3 specific claims coming from the proponents, and then I offered up my predictions. In the second essay, I went directly after a number of irresponsible claims that Vinod Khosla made in his second essay. Mr. Khosla is essentially betting people’s lives by making the claims he is making. If, ten years down the road, it becomes clear that he can’t deliver, we will have lost ten precious years in which we could have embarked upon a massive effort to deal with Peak Oil. But as long as there are Vinod Khoslas out there, naively making promises that everything will be OK, that massive effort will be delayed. Our energy policy is far too important, so I believe Mr. Khosla’s promises should be vigorously challenged.

Below is the text of my rebuttal to Vinod Khosla’s claims, which can be found in essays that he wrote for VentureBeat and The Huffington Post. Please note that I am not arguing for a “No” vote, nor am I making a blanket defense of the oil industry. I am responding to Mr. Khosla’s claims.

Apparently some Proposition 87 proponents have never heard the adage “People in glass houses shouldn’t throw stones.” They complain about slimy tactics, while engaging in plenty of slimy tactics and hypocrisy themselves. In this essay, I will address Mr. Khosla’s second essay and show that his glass house is vulnerable to my pile of stones. This is also why I become concerned when people with expertise in one field try to influence policy in another. My dentist is a great guy, and very good at what he does, but I wouldn’t let him remove my appendix. And while he should certainly be involved in the discourse, he shouldn’t receive undue influence on energy policy just because he is a good dentist.

I explained in my previous essay who I am, and that I am not campaigning against Proposition 87. My interest is in raising the level of political discourse with respect to energy policy. My criticisms are aimed at the “Yes on 87” campaign, because much misinformation is being directed at my own industry. I find it very ironic that those who are flying around the country to decry the “evil oil industry” are doing so using jet fuel supplied by the oil industry. They enjoy many conveniences as a result of oil and gas production, but have deluded themselves into believing their lifestyle could be maintained if we all switched to alternative energy.

I don’t live in California and have never seen an ad from either side, but I have seen a number of “Yes” essays in the mold of Mr. Khosla’s latest missive. So let’s dissect his latest entry for some examples of hypocrisy, misinformation, and faulty logic. Mr. Khosla’s comments are in quotes.

Given the current oil situation the ONLY way oil prices will go down is if we have alternatives to oil.

Since it doesn’t benefit any big business interests, conservation, probably the most valuable “alternative” out there, is mostly overlooked in this debate.

Mr. Khosla: Given the massive profits they make on oil they wouldn’t want a cheaper alternative in the marketplace.

I covered profit margins in my previous essay, and noted the hypocrisy coming from an industry that sees double the profit margins of the oil industry. But “they wouldn’t want a cheaper alternative” is misinformation. The entry barrier for ethanol production and biodiesel is quite low. If ethanol is ultimately a cheaper option, oil companies will start making ethanol. Right now, most do not see that it is clearly viable in the long-term without subsidies. In fact Mr. Khosla was recently quoted in Red Herring: “Contrary to what you might believe, I think it’s extremely unlikely that in 20 years we will be using any ethanol in cars.” I think the oil industry shares this view, which is why they aren’t rushing out to build ethanol plants.

However, oil companies have made big investments into solar, wind , and biofuels. In fact, Iogen, a company running a large scale cellulosic ethanol trial, is receiving major funding from Shell. Of course this puts oil companies in a “damned either way” position. If they invest in alternatives, critics say it is a token effort, or just for public relations. If they don’t, then they are standing in the way of progress.

It is also unfair if they use their political clout to wrangle billions of dollars of subsidies from American taxpayers.

Given that the ethanol industry receives billions in direct subsidies and you are trying to secure even more with Prop 87, I am going to call this a bit of hypocrisy. The ethanol industry is the recipient of $0.51 gallon in direct ethanol subsidies. However, the subsidy is per gallon of ethanol produced, as opposed to actual net energy produced. If the ethanol energy return is 1.3/1, then it takes 3.3 gallons produced to net the energy equivalent of 1 gallon of gasoline. The website Zfacts, strongly supportive of alternative energy, concludes that when all the subsidies are added in, displacing a single gallon of gasoline costs $7.24 in ethanol. Furthermore, the ethanol industry depends on fossil fuels to drive their trucks and tractors, so any oil “subsidy” is also an indirect ethanol subsidy.

Many ethanol advocates claim that the $0.51/gallon subsidy actually benefits the oil industry. Without going into a detailed analysis of why this claim is wrong (it essentially allows ethanol producers to charge $0.51/gal more than market conditions would warrant), ask yourself why it is the ethanol/farm lobby who is fighting to keep this subsidy, and oil interests who are speaking out against it. Note that the executive vice president of the American Coalition for Ethanol vigorously defends the subsidy. Is this a case of oil company benevolence?

And they often make us pay for their R&D.

As compared to making your competitor pay for your R&D? I will admit, it is a brilliant move to force your competitor to fund your own research, but the above statement really takes hypocrisy to a whole new level.

The world uses about 12 billion gallons of ethanol today. If that was removed form the market, oil prices would spike up. If we produce more, oil prices will decline as supply increases.

This one is just faulty logic. Ethanol production in the past few years has exploded. Did oil prices decline?

A few token projects to “sound green” are thrown in but almost no money goes into finding real alternatives to oil.

As I stated earlier: “Damned either way.”

Even the small technology oriented Silicon Valley company can spend 20% of its revenue on R&D.

I have an idea then. Since Silicon Valley is so innovative, and we know that companies there are quite profitable, why don’t we tax them to fund this measure? That seems like a real win-win solution. The people who most strongly support this proposition will be the ones who will both pay for it, and “benefit” from it.

The oilies are scare mongering with their massive dollars.

We actually prefer our pejoratives to be capitalized. But this is an example of the need to raise the political discourse. Also – and feel free to correct me if I am wrong – the proponents are spending tens of millions of dollars to push this measure, and they are doing it with tactics that have been more along the lines of hate mongering.

President Clinton has said ethanol is 33% cheaper. I know it is cheaper to produce, even with the subsidies oil currently manages to get.

Ignoring the repeated hypocrisy over the subsidies, let’s talk about economics. Now, I may not be well-versed in Silicon Valley economics, but here’s what I think. If I have a product that I can make for cheaper than the competitor, why would I need mandates, subsidies, and an extortion tax on my competitors in order to compete? I don’t really think I would need this, if indeed the claim is true. So, that leaves me to believe that either the claim isn’t true, or ethanol companies are worse than oil companies at “ripping people off.” 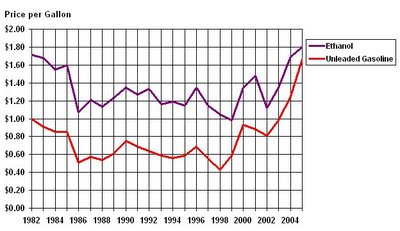 This is a comparison of the average annual rack price of ethanol versus mid-grade gasoline for the past 25 years. Ethanol, with lower energy content, has been more expensive than gasoline in each of the past 25 years. So there is a track record over a long period of time that suggests that not only do ethanol prices rise and fall in response to gasoline prices (putting a damper on the argument that ethanol is going to drive down gasoline prices) but the price differential is actually greater since most people don’t buy the more expensive mid-grade.

I hope that Mr. Khosla can see that his glass house is quite vulnerable. I call on him to raise the level of discourse on our energy policy – regardless of the outcome of the vote.

3 thoughts on “People in Glass Houses”