In the previous article Renewable Energy Grew At A Blistering Pace In 2021, I highlighted the inability of renewable energy to keep up with overall energy demand:

“But here is the challenge the world faces. Against the backdrop of the 5.1 exajoule global increase in renewable energy consumption, global energy demand increased by 31.3 exajoules in 2021 — over six times as much.”

The renewable energy growth rate has been far greater than that of any other energy category, but renewables are still a relatively small portion of our overall energy consumption. Thus, those huge growth rates aren’t yet translating into enough energy consumption to even stall global fossil fuel consumption growth. That poses a serious challenge when global carbon dioxide emissions continue to climb.

Nuclear power is unique among energy sources. It can be scaled up to very large plants, it is firm power (available upon demand), and it produces no carbon dioxide while generating electricity.

A 2017 paper from the University of Texas identified nuclear and wind power as the power sources with the lowest levelized carbon dioxide emissions (link). The levelized carbon intensity is calculated by dividing a power plants’ emissions over its lifetime by the overall expected electricity output.

It seems like a no-brainer. So, why aren’t we doing it?

You have to wonder where things would stand today if not for the 1986 Chernobyl nuclear disaster. The world’s appetite for nuclear power had been rising rapidly, right up until that accident dramatically changed the growth trajectory. 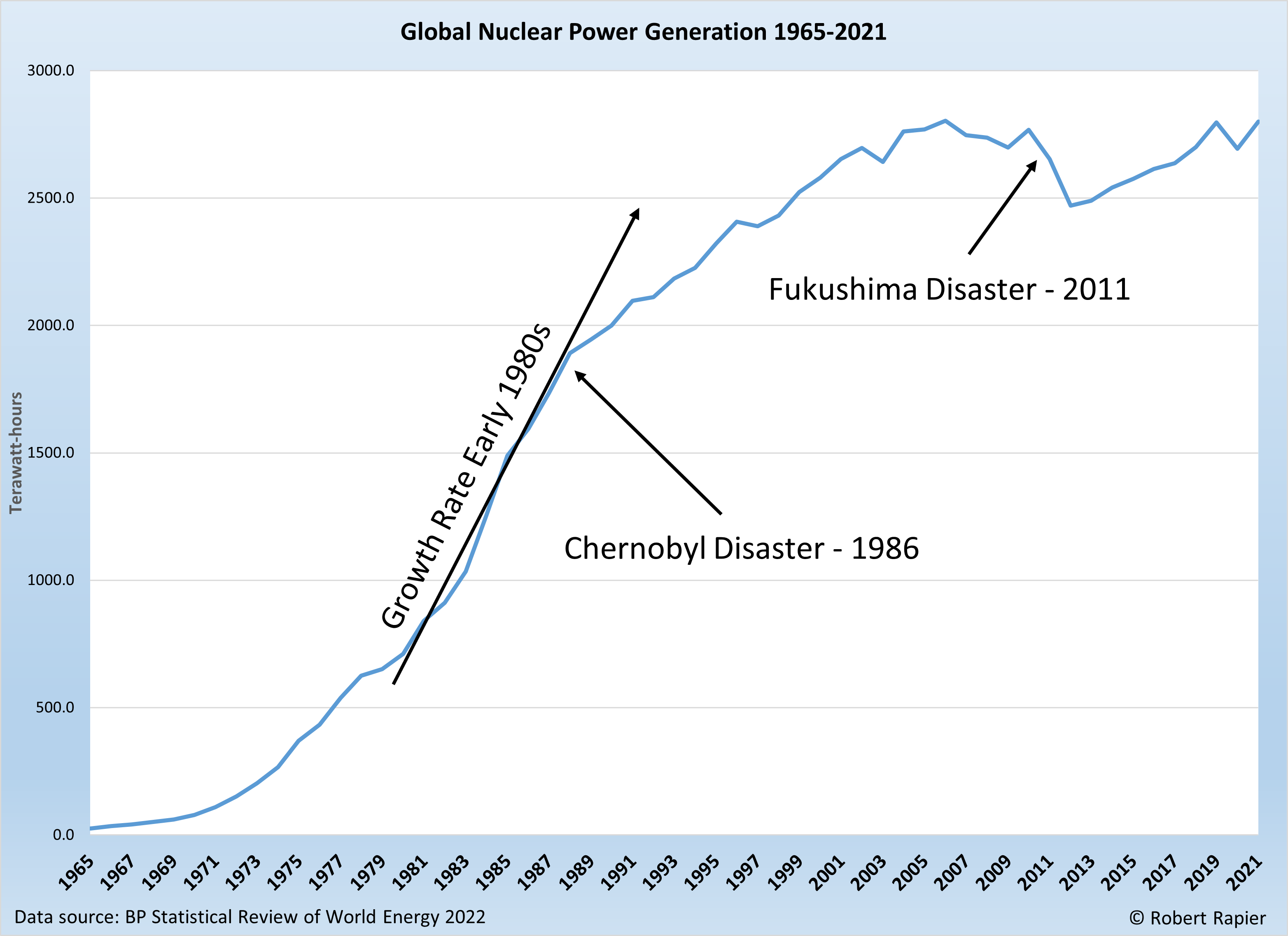 Chernobyl substantially impacted the global growth rate of nuclear power, but it was still growing at a respectable rate following Chernobyl. For the next 25 years nuclear power would continue to grow around the world, but it would finally take a significant step back following the 2011 Fukushima disaster in Japan.

Those two incidents are the difference between a world that has rapidly phased out coal, and one that hasn’t. They contributed to a public distrust of nuclear power. It’s understandable. If you see nuclear accidents that cause people to have to permanently abandon their homes on a moment’s notice, of course people are going to distrust nuclear power. The general public has a fear of radiation that in many cases is irrational.

Although we can’t change the past, we can work to improve the public’s attitude toward nuclear power. It is possible to build, design, and operate nuclear power plants that can’t suffer the kinds of consequences seen in Chernobyl and Fukushima. It is naturally going to take some time to convince a skeptical public of this.

But the stakes are too high. We have to devote the energy and resources into doing this. Otherwise, taking a serious bite out of global carbon emissions may be an insurmountable challenge. I say this based on the overall demand growth for energy, and the inability of renewables to even keep up with demand growth.

The lowest-hanging fruit is in the Asia Pacific region, which is already the source of the bulk of the world’s carbon emissions. We need to do everything in our power to help countries like China and India move from coal to nuclear power.