One of the latest lines of attack in the finger-pointing over rising gasoline prices goes like this: U.S. oil companies are sitting on a huge number of permits, content to reap enormous profits while they refuse to drill for oil.

This is mostly false, but with a kernel of truth that is never taken in context. So let’s discuss what’s really happening.

The truth is that the number of rigs drilling for oil in the U.S. is steadily climbing. The year-over-year increase in the Baker Hughes North America Rig Count is now about 60%. In fact, historically it has rarely climbed at a faster pace than this. Clearly, the notion that oil companies are just sitting on their hands, content to withhold production and squeeze American consumers is false. 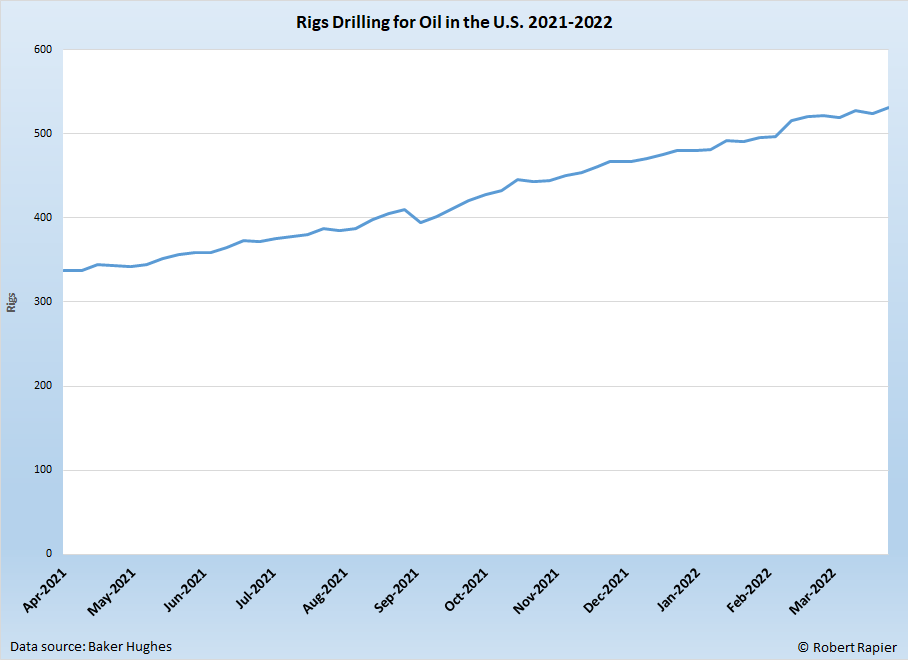 Since drilling activity is steadily rising, what is the source of the claims that U.S. oil companies aren’t drilling? I think there are two elements behind this misunderstanding.

First, many don’t understand the significant lag between drilling and oil production. The drilling count may have risen by 60% over the past year, but U.S. oil production is only up by about 8%. Thus, the conclusion is that U.S oil companies aren’t drilling. As the chart shows, they certainly are, but it takes time for that drilling to produce results. At the same time, depletion of existing wells is also a factor working against the attempts to increase production.

The second element is one that has the kernel of truth. The rig count is steadily rising, but it is still significantly below the drilling levels prior to the Covid-19 pandemic. A three-year look at drilling activity shows the dramatic impact of the pandemic, as well as the steady recovery since the rig count began to climb in the fall of 2020. 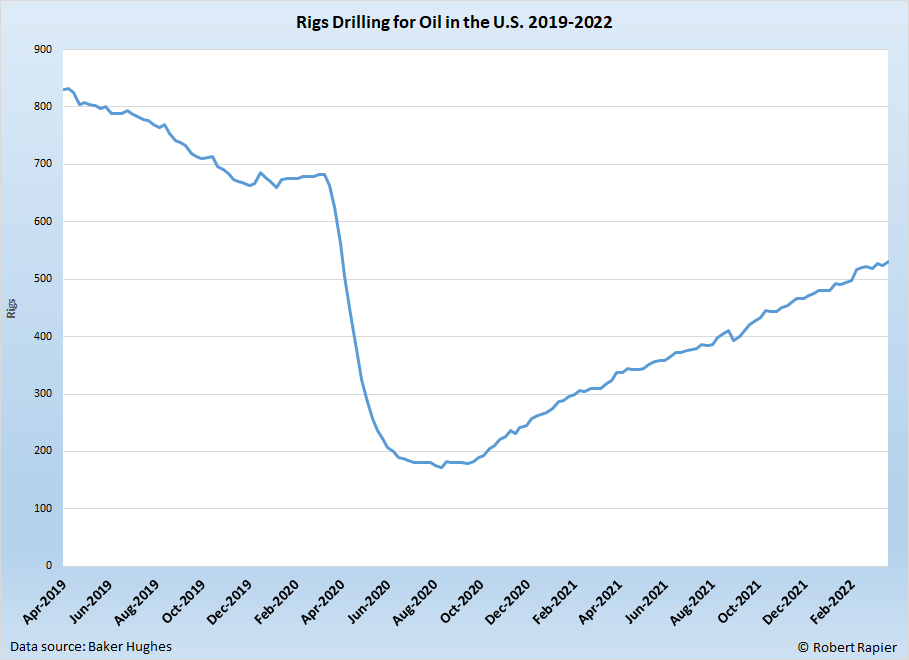 Between February and July 2020, the rig count plunged by over 70% as demand for oil plummeted. There are a number of consequences from this plunge that we are still living with today, and that are driving oil prices higher.

It is certainly a fair question to ask why oil companies aren’t increasing drilling at a faster pace. There are several reasons for that. One is that the industry is suffering from manpower and material shortages.

For example, when oil demand fell in 2020, many people permanently left the oil industry, frustrated by years of up and down cycles. The oil industry continues to suffer from a manpower shortage that is affecting many industries.

This manpower shortage also impacts oilfield services and supplies. Sand used for hydraulic fracturing, for example, is in short supply. That won’t necessarily limit drilling, but it will limit how quickly an oil well can start producing oil.

A number of oil companies went bankrupt during the 2020 plunge. Those companies won’t be drilling for oil.

Finally — and here is the bit that contains a nugget of truth — many oil companies have said they are going to be more financially disciplined than they have been through previous boom and bust cycles.

Critics of the oil and gas industry have seized on this financial discipline as proof that oil companies are holding back production. However, one of the biggest criticisms about the shale boom over the past 15 years is that the oil companies never make consistent money. Indeed, if you look at the financials of many oil companies, they lost money in four of the past ten years.

The reason they don’t make consistent money is that they overinvest in oil production, just to see the price of oil crash. That’s not a very good business model. So a number of oil companies have decided to proceed more cautiously, which is certainly warranted given the multiple oil price crashes that have occurred in the past 15 years.

I can assure you that each oil company wants to produce as much oil as they can at current prices, because they will indeed be very profitable with oil prices above $100/bbl. But they can’t immediately toggle production higher, and they don’t have crystal balls. They don’t know where oil prices will be a year or two from now, and that’s the reason you don’t see them ramping up drilling at an even faster pace.

You may disagree with their decisions, which is your right. But you should at least understand the reasons for these decisions.