In the previous article, I discussed the growing importance of Environmental, Social, and Corporate Governance (ESG) for companies. Perhaps no industry has a higher visibility on ESG metrics than the energy sector. After all, a substantial fraction of global carbon emissions arise from the production, transportation, and consumption of fossil fuels.

Energy companies have tackled this issue in several ways. Today, I want to discuss the role of hydrogen as a way of improving ESG metrics.

The Role of Hydrogen

Hydrogen is increasingly being viewed as an important tool for reducing carbon emissions, because the use of hydrogen for energy generates no direct carbon dioxide emissions. In May 2021, the International Energy Agency (IEA) released a new report detailing the “Seven Pillars” that would be required to get the world to net‐zero carbon emissions (NZE) by 2050. The report is Net Zero by 2050: A Roadmap for the Global Energy Sector. One of those pillars is “Hydrogen and hydrogen‐based fuels.”

The IEA projects that about half of low‐carbon hydrogen produced globally in 2030 will come from coal and natural gas with carbon sequestration. Demand will come from industry, refineries, power plants, and the transportation sector. Hydrogen will be increasingly blended into natural gas for distribution to homes and industry.

Bank of America recently released its own hydrogen forecast, in which they estimated annual hydrogen revenues of $2.5 trillion by 2050 made possible by hydrogen infrastructure investments of $11 trillion. The authors project that hydrogen volumes will increase by 6x by 2050, supplying 22% of global energy production.

Not All Hydrogen is Created Equally

But the key to having hydrogen help transition the world to net zero emissions is to ensure that the carbon is produced with a low carbon intensity. According to the U.S. Department of Energy (DOE), more than 99% of hydrogen today is produced from fossil fuels. Around 95% is produced via the steam methane reforming (SMR) process, and another 4% comes from partial oxidation (POX). While fossil fuels currently provide feedstock for hydrogen production, most production is done without regard to the carbon dioxide released, negating the net zero contribution of the resulting hydrogen fuel.

Hydrogen production “pathways” can be evaluated according to their carbon intensity (CI). This measures the amount of greenhouse gas (GHG) emissions released into the atmosphere per unit of fuel energy over the fuel’s lifecycle. Carbon index analysis considers the entire production process from site location, to facility construction, to energy requirements for production, to CO2 capture, to transportation and delivery. The California Air Resources Board (CARB) has estimated that hydrogen production via SMR has a relatively high CI of around 150 grams of carbon dioxide equivalents per megajoule (gCO2e/MJ). A low-carbon economy will require hydrogen production with a lower CI. 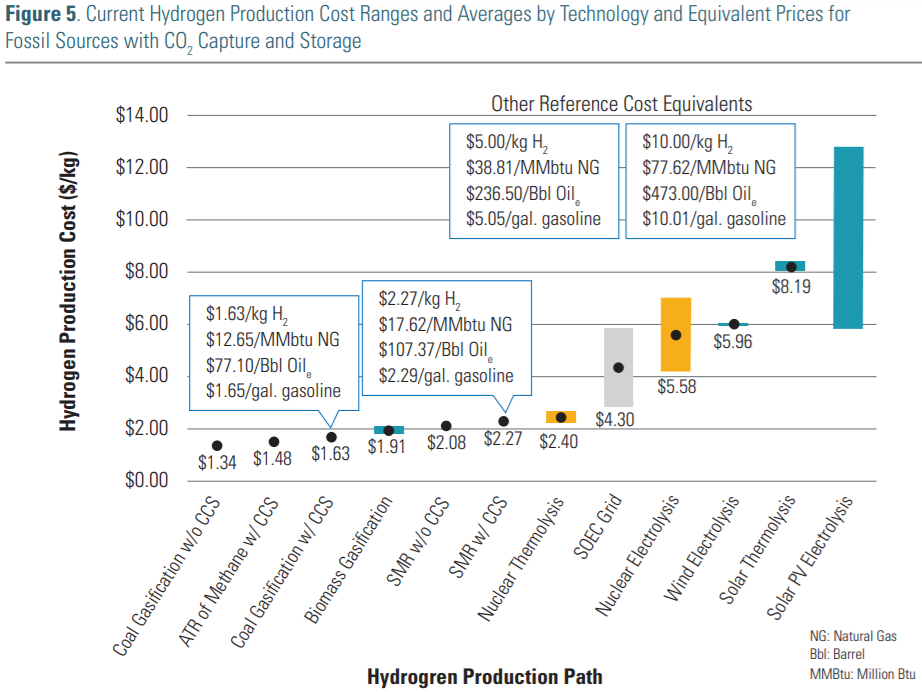 At a price that is 3-6 times higher than hydrogen produced from fossil fuels, the green hydrogen ideal is still at a significant economic disadvantage.

It is possible to capture and store (CCS in the previous graphic) or otherwise utilize the carbon dioxide when hydrogen is produced from fossil fuels. This hydrogen has a low carbon footprint and is classified as “blue hydrogen”.

Thus, production or use of blue hydrogen offers the fossil fuel industry a significant opportunity to improve their ESG scores. The DOE estimates that blue hydrogen can be produced via the SMR process for $2.27 per kilogram – an overwhelming cost advantage over hydrogen produced from renewable sources.

Blue hydrogen has a substantially lower CI score than grey hydrogen, and is significantly cheaper than green hydrogen. It can serve as an ideal transitional step in the decarbonization of the economy.

The Cornell and Stanford Study

I would be remiss to ignore that a recent report from researchers at Cornell and Stanford Universities claims that the use of blue hydrogen is actually worse than simply burning natural gas.

However, as Ted Nordhaus, Founder and Executive Director of The Breakthrough Institute recently pointed out in a Twitter thread, the study’s findings were based on worst-case scenarios throughout the analysis.

Nordhaus writes “If gas production is crazy leaky, you value methane reductions MUCH more than carbon reductions, and you assume that carbon capture tech doesn’t capture over a third of the carbon, blue hydrogen is worse than gas!” He adds that by using a less extreme set of assumptions — by the admission of one of the study’s authors —the global warming potential (GWP) would be 10 times lower than the study concluded.

However, it is fair to point out that the CI of blue hydrogen will depend very much on the entire production process. If methane is obtained from a process with a high leakage rate, and the carbon isn’t captured and stored, then the CI is going to be much higher.

In the next article, I will provide specific examples of how some companies are using hydrogen to improve ESG metrics.