You may count me among those who want to see society move beyond fossil fuels. We all know there are negative consequences associated with fossil fuel usage, such as the emission of carbon dioxide and various other pollutants.

However, fossil fuel replacements come with their own risks and trade-offs, and it is important to understand and weigh these trade-offs as we transition from fossil fuels.

Two key issues are scale and reliability. Most people drastically underestimate our ongoing dependence on fossil fuels. According to the latest BP Statistical Review — which is the “bible” of energy statistics — in 2019 fossil fuels supplied 83.3% of our energy in the U.S.; nuclear power supplied another 8.0%. Renewables, including hydropower, just 8.7%.

Even though renewables are expanding rapidly, the percentage of energy we get from fossil fuels hasn’t changed that much over the years. After declining a bit a decade ago due to high prices, oil consumption in the U.S. has once again been on the rise (excepting last year’s pandemic-related collapse).

Meanwhile, most people still rely on the local service station for fuel for their cars, and they rely on their local utility to power their homes and businesses. There are occasional exceptions, but generally when we need energy we can count on it. Fossil fuels, despite their negative environmental aspects, are reliable and available at large scale.

I believe there will be a day when renewables — combined with backup storage like batteries — will reliably replace our massive fossil fuel consumption. We are moving in that direction. But, moving too fast can lead to unintended consequences.

The risk is that we develop unrealistic expectations for the load renewable energy is going to carry — and how quickly — and we underinvest in fossil fuel production and infrastructure. The reality is that we are still going to be using a lot of oil in a decade. The question is whether we will produce that locally, or go back to being dependent on foreign countries for that oil.

Consider the Keystone XL pipeline, as an example. This was an expansion of an existing pipeline. It was designed to bring more Canadian crude oil into the U.S., but would have also transported oil from the Bakken in Montana and North Dakota.

One of President Biden’s first actions in office was to revoke the permit for this pipeline. This is exactly the kind of action that makes it exceedingly difficult for energy companies to execute major projects that may take many years to complete. There is always a political risk that energy companies have to consider.

Now, take the other side of that argument. Let’s say they don’t build it, and a decade from now renewables aren’t displacing fossil fuels as quickly as had been imagined. Now we need the oil that the pipeline could have supplied. So instead of getting it from our friendly neighbor to the north, we have to get it from Venezuela, Saudi Arabia, or Russia.

This isn’t just theoretical. As I pointed out in a previous article, California is one of the most progressive states in the country when it comes to renewable energy. At the same time, the state is not known as being particularly friendly toward development of fossil fuel infrastructure.

What has been the result? Despite California being the fastest-growing market for electric vehicles in the U.S., its oil consumption (pre-pandemic) is nearly as high as it has ever been, and it has steadily grown in recent years. Further, California’s dependence on foreign oil imports has tripled in the past 20 years. California now relies on OPEC for more than half of its oil needs. This is in stark contrast to most U.S. states, which have seen crude oil imports plunge over the past decade. 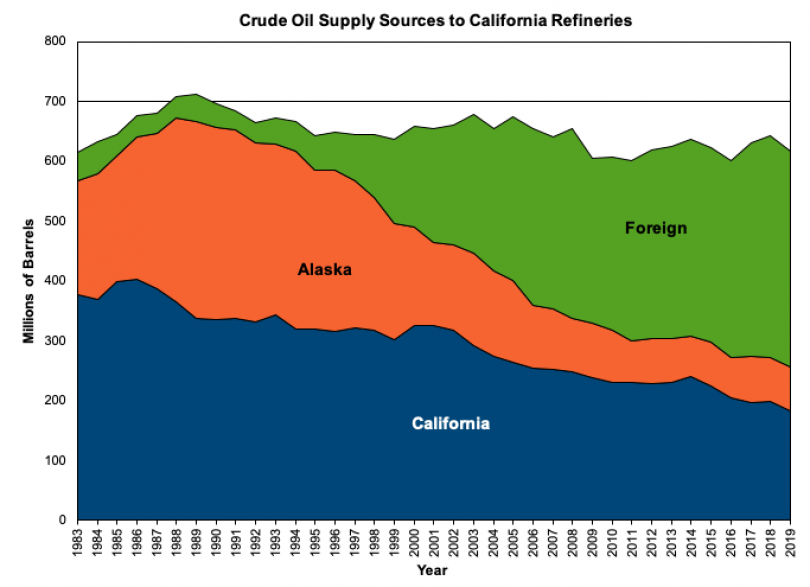 If we prematurely discourage investment in fossil fuels — and then our dependence doesn’t decline as rapidly as the Biden Administration envisions — that is a recipe for shortages, higher prices, and greater dependence on foreign nations for our energy.

I understand that the Keystone XL cancellation is more about messaging than anything else. It is a signal to the world that we are serious about combatting climate change. But if our message is undermined by our actions (e.g., failing to replace fossil fuels with renewables quickly enough), what have we accomplished?