In 2020, the energy sector got hit with the triple-whammy of a price war between Saudi Arabia and Russia, demand destruction as a result of the Covid-19 pandemic, and perceptions that oil is about to give up its dominance to renewable energy and electric vehicles. Those factors combined to send the energy sector reeling in 2020.

As the energy sector plunged in February and March, at one point the XLE was down more than 60% for the year. The XLE bounced back strongly in the fourth quarter with a sector-leading return of 28.2%, but still ended the year with a loss of 32.7%. Among the Select Sector SPDRs that divide the S&P 500 into 11 sector index funds, the energy sector was by far the worst-performing sector. (Note that all returns discussed here are total returns, which include the effect of dividends paid during the year). 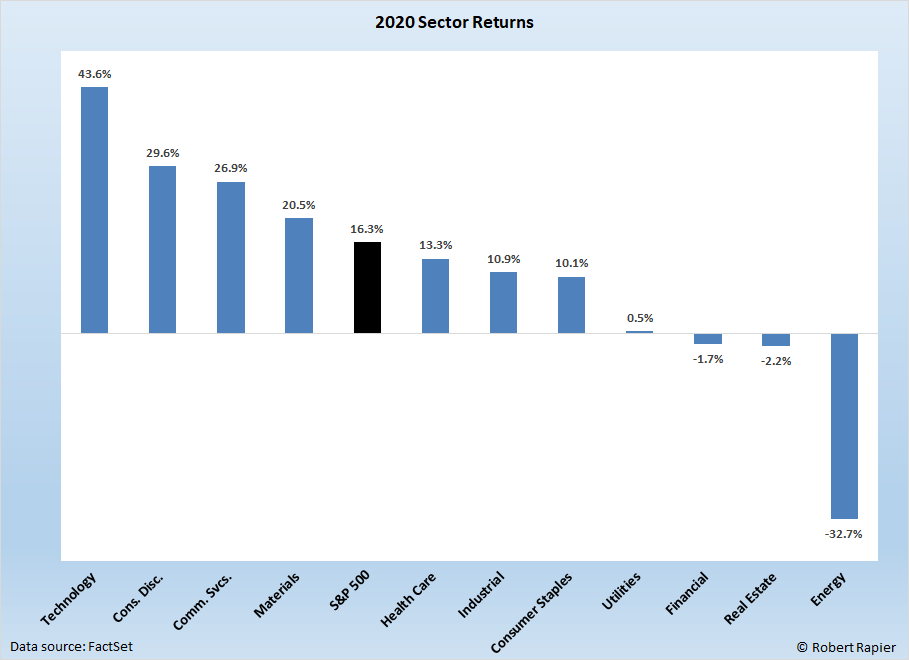 No segment of the energy sector was spared in 2020. According to data provider FactSet — which I use to analyze companies — the average midstream company was down 31.9% in 2020. These are the companies that transport and store oil and gas.

Among the 58 companies that FactSet classifies as “midstream”, there were only seven that ended the year with a positive return. Best among the group was Sprague Resources LP, which generated a total return of 32% (aided significantly by an annual yield currently at 14.1%). In second place was Antero Midstream, which had a total return of 27.6% (and a present yield of 16.0%). However, 18 of the Top 20 midstream companies by market capitalization were down for the year, with the group averaging a decline of 21.6%.

All of the integrated supermajors declined in 2020, with the group averaging a loss of 32.5%. The best performer of the group was Total with a total return of -18.0%. BP and Royal Dutch Shell were both down 41% on the year.

The 20 largest upstream companies were down an average of 33.6% for the year. Among the 65 companies categorized as “upstream” by FactSet, only four generated a positive return. However, if you were lucky enough to hold segment leader Antero ResourcesAR for the year, you were rewarded with a return of 91.2%.

The Big Three refiners — Marathon Petroleum, Valero, and Phillips 66 — were down an average of 32.3% for year. Marathon was the best performer with a loss of 27.4%.

Lately the talking heads have spent a lot of time talking about a recovery in the energy sector in 2021. However, keep in mind that the energy sector already had a significant bounce in Q4, and where it goes from here depends strongly on how quickly we emerge from the pandemic and see economic activity normalize.