The global Covid-19 pandemic led to an abysmal second quarter for the earnings of U.S. oil companies, but oil prices themselves staged a recovery during the quarter.

The second quarter began with oil prices having fallen into the teens, and then West Texas Intermediate (WTI) went negative for the first time ever. But by the end of the quarter, the price of WTI had recovered back to $40/bbl. For the entire quarter, the daily closing price of WTI averaged $27.96/bbl.

Today the price of oil is just over $42/bbl, which is about 30% lower than where it was at the beginning of the year. But major oil producers like ConocoPhillips and EOG Resources are still respectively down 42% and 49% year-to-date, a significant under-performance when measured against the oil price decline. 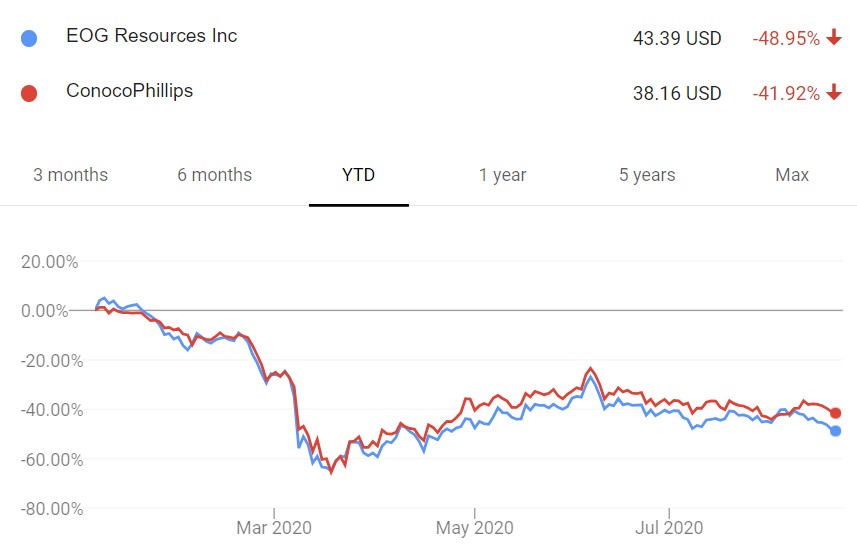 But how much have the underlying fundamentals recovered since the widespread March and April business shutdowns crushed demand for oil? Because some of the following figures are influenced by the season, I will compare current numbers to those at the beginning of the year, as well as those a year ago.

Likewise, demand still hasn’t recovered. For the same week ending 8/14/20, the four-week average (because weekly numbers can swing a lot) for U.S. demand for petroleum products was 18.4 million BPD. That’s a decline of 14% from the 21.5 million BPD demand from the same period last year. But it does mark a substantial recovery from early April, when weekly demand dipped below 14 million BPD.

Rig count numbers tell an even more dramatic tale. A year ago, there were 754 rigs drilling for oil in the U.S. By January 1, 2020 that had fallen to 670 rigs. But Covid-19 brought on demand destruction and sent the rig count into free-fall. Last week the rig count fell to 172, a 77% decline from a year ago and the lowest level in more than a decade.

Finally, let’s look at inventories. These really tell the tale of how things are balancing out between the production and demand sides. A year ago, total stocks of crude oil and petroleum products in the U.S. stood at 1.956 billion barrels. The most recent report shows these stocks at 2.095 billion barrels, a one-year increase of 7.1%. However, this is down slightly from the 2.117 billion barrel peak level (an all-time high) reached in mid-July.

So where do we go from here? The inventory data suggests that the oil markets are still somewhat oversupplied, while the rig count data suggests further declines in oil production. But it will likely take some real declines in inventories before oil prices recover much above current levels.

One thought on “Where The U.S. Oil Industry Stands”