Income-generating assets have had a challenging time since the Covid-19 pandemic began. Popular income vehicles like master limited partnerships (MLPs) have been especially hard-hit. The plunge in energy prices negatively impacted MLPs, because the majority of companies structured as MLPs transport and store oil and natural gas.

A Brief History of MLPs

An MLP issues units rather than shares, and passes profits to unit holders in the form of periodic distributions. Historically, the big advantage for MLP investors is that MLPs aren’t taxed at the corporate level. This arrangement avoids the double taxation of corporate income and dividends affecting traditional corporations and their shareholders. All things being equal, this structure should deliver more money to unit holders.

Midstream MLPs are typically viewed as toll collectors for oil and gas producers that use their pipelines. Their cash flows are protected by long-term, take-or-pay agreements. As such, their fortunes aren’t as subject to the ups and downs of oil and gas prices. But the oil price crash of 2014 was so deep that it ultimately dragged down MLPs as well. That shook investor confidence.

Until the oil price crash of 2014, MLPs had long been favored for their above average yields and stable returns. Many yielded 6%-8% and steadily grew those distributions year after year.

But a subsequent series of events would further strain the MLP model.

Stresses in the MLP Structure

In 2017, President Trump signed a tax reform bill that dropped the corporate income tax rate from 35% to 21%. This is great for corporations, but it significantly reduced the key tax advantage an MLP held over a corporation. This move made MLPs a less attractive option than they had been, because there is additional complexity in tax filing for MLP investors.

Second, a ruling by the Federal Energy Regulatory Commission (FERC) to reverse a longstanding policy on MLP tax costs for interstate pipelines drove up the cost of business for some companies. Several MLPs were significantly hurt by the FERC ruling, again reducing one of the advantages they held over a comparable corporation.

Finally, many MLPs pay incentive distribution rights (IDRs) to their sponsors. Elimination of IDRs has been cited as another incentive driving some MLPs to convert to corporations, because these IDRs can be a drag on growth after a while.

These factors combined to shrink the pool of MLPs as many converted to corporations. That in turn resulted in institutional capital exiting MLPs, which has created net selling pressure on the sector.

Many of the remaining MLPs have publicly discussed the possibility of converting. The market now seems to favor a corporate structure over the MLP structure.

The diversified MLP Brookfield Infrastructure Partners provides an instructive example. Last September, this MLP announced that it was going to spin off a new class of shares based on a corporate structure. The details, from the press release announcing the creation of the shares, explained the motivation:

“The class A shares will be structured with the intention of being economically equivalent to units of BIP, including identical distributions. The class A shares are intended to allow investors the ability to own the equivalent economic exposure to BIP, including identical distributions, through a traditional corporate structure.

The benefits of the creation of BIPC will be:

As a BIP unit-holder, this spin-off was of particular interest to me. Note that the reason for the spin-off is purely to create more demand for the shares over the MLP units, which are otherwise identical in every way.

I watched with interest as my newly-issued BIPC shares handily outperformed the BIP units. In fact, BIPC outperformed BIP nearly from the start: 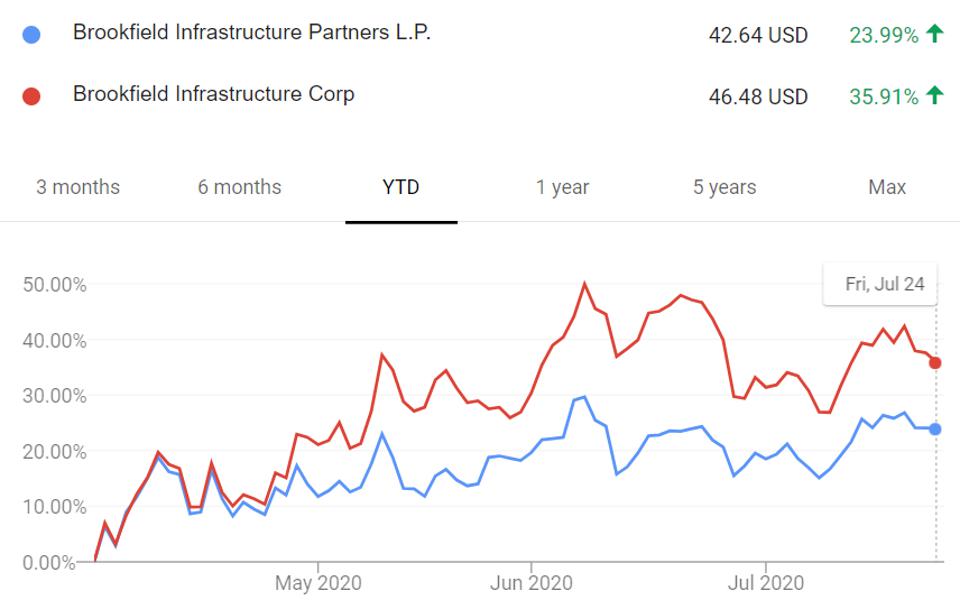 Keep in mind that the company underlying these two symbols is exactly the same. The only difference is higher demand for shares over MLP units.

If you hold an MLP, perhaps the best thing that can happen is a conversion to a corporation. Even though MLPs do still have some tax advantages over corporations, at this point the market is punishing the MLP structure. There is a compelling case to be made for converting, because it will unlock shareholder value by increasing the demand pool for shares.

I have had my doubts as to whether this was the right course of action, but the BIP/BIPC example is compelling.