There are two interrelated reasons for this: The collapse of coal consumption over the past decade, which was fueled by the rise of cheaper alternatives.

I have covered the reasons for coal’s collapse previously. The short version is that policies to curb carbon emissions were put in place about the same time the shale boom and renewable power revolutions created cheaper, cleaner alternatives to coal.

The graphic above shows the surge in renewables that helped collapse coal demand. This surge is better shown by the following graphic, which highlights the three categories of modern renewables that have driven the consumption surge: Wind power, solar power, and biofuels.

This milestone was highlighted by the EIA in a recent brief. The brief was based on the EIA’s Monthly Energy Review. Although most of the coverage over this development has focused on the fact that renewables overtook coal, there is another story within the data that is missing.

The Monthly Energy Review highlights all categories of U.S. energy consumption. So, how does the consumption of renewables and coal compare to our consumption of petroleum, natural gas, and nuclear power? The following graphic puts everything in context. 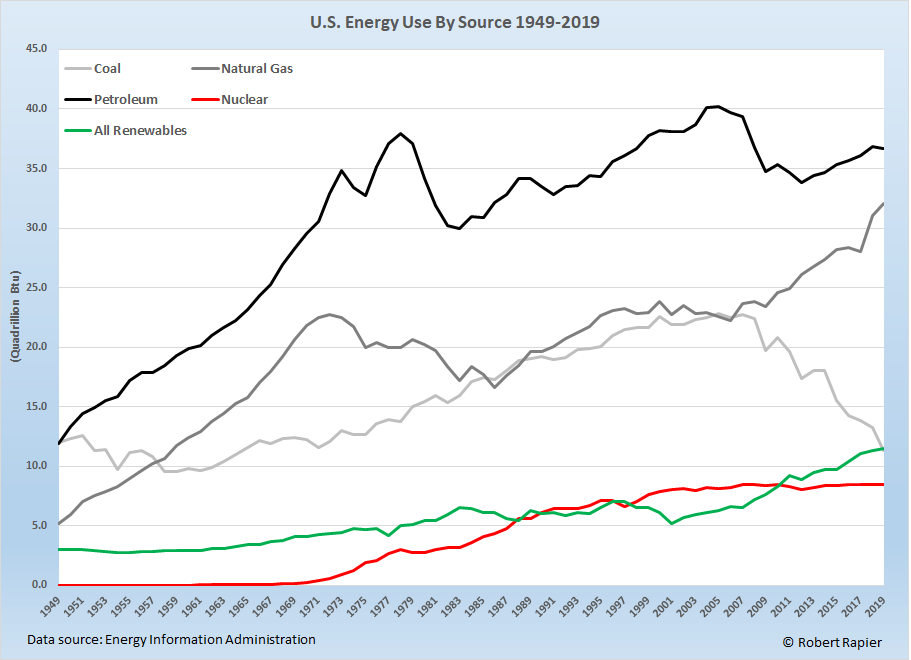 What this graphic shows that the previous graphics don’t show is that it was natural gas that took the biggest share of coal’s market. Further, it shows that fossil fuels still dominate our energy consumption. Nuclear power consumption has remained flat for years, and like coal, has been surpassed by renewables.

Last year the U.S. consumed 11.3 quadrillion BTUs (quads) of coal and 11.5 quads of renewables. But we also consumed 36.7 quads of petroleum and 32.1 quads of natural gas. Each of these categories of fossil fuel consumption was greater than our combined consumption of renewables and coal, which provides a broader perspective on our energy consumption.

So, renewables did play an important part in coal’s demise, but they often get most of the credit. In fact, without cheap natural gas from the shale gas boom, U.S. coal consumption would still be substantially higher than U.S. renewable energy consumption.