If you ask politicians in the corn belt, or those who produce corn or ethanol, they know exactly where to place the blame for their recent troubles: The oil industry.

To recap, the Renewable Fuel Standard (RFS) established quotas of renewable fuels that have to be blended into the fuel supply, and an enforcement mechanism to ensure those quotas were met. In short, refiners have to blend biofuels (predominantly corn ethanol) or pay a price.

However, there is a hardship clause that is meant to protect small refiners that process less than 75,000 barrels of oil per day from “disproportionate economic hardship” under the RFS. These waivers are issued by EPA, which has granted them liberally to refiners that requested them.

Ethanol supporters have been livid over these waivers, arguing that they reduce demand for ethanol and lead to the closing and idling of ethanol plants. The oil industry disagrees that these waivers are impacting ethanol demand.

This week American Fuel & Petrochemical Manufacturers (AFPM) President and CEO Chet Thompson testified at a House Energy and Commerce hearing on the impact of these small refinery exemptions. He addressed the issue of whether they are harming ethanol demand and leading to the closing and idling of plants.

Thompson testified that “All available data show that there has been no decline in domestic biofuels consumption as a result of small refinery waivers.” He argued that “the latest Energy Information Administration (“EIA”) data show that year-to-date ethanol consumption is at an all-time high both volumetrically (8.39 billion gallons) and as a blend rate (10.17 percent).” 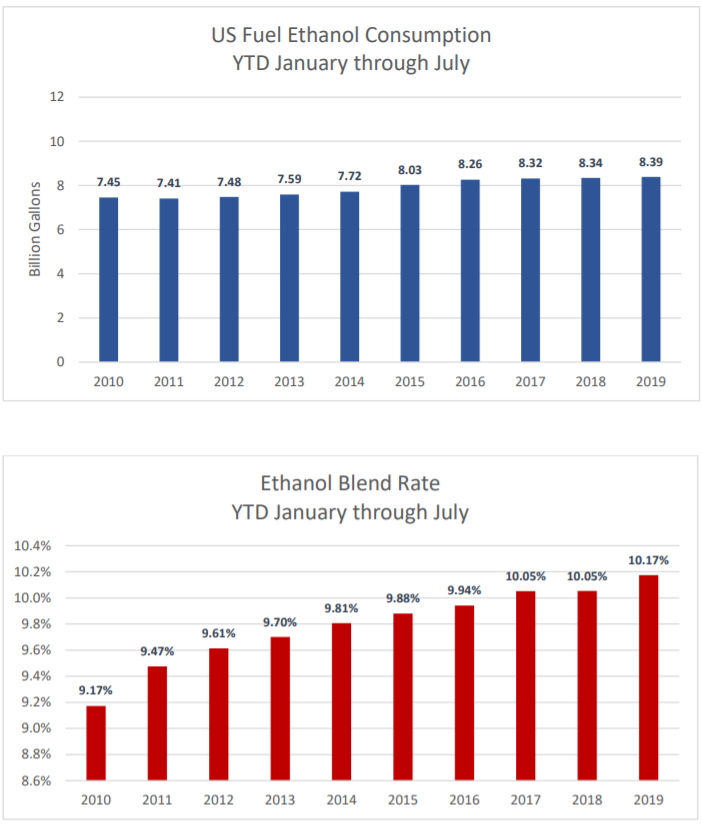 Thompson argued that the real culprit that is hitting domestic ethanol producers can be found in the international market. Ethanol exports have dropped 162 million gallons through July of this year, compared to the same seven-month stretch in 2018. Corresponding to this, the U.S. is producing 175 million fewer gallons of ethanol this year.

While the AFPM doesn’t speculate on the reason ethanol exports are falling, the ethanol lobby themselves seem to have identified the culprit. Earlier this year, ethanol lobbying group Growth Energy issued a press release in which they pointed to the ongoing trade war with China:

“The tariffs implemented in April 2018 on exports of ethanol to China have considerably diminished the ability for American producers to access the second largest fuel market in the world. This is reflected in the 12-month rolling exports, which dropped from 1.74 billion gallons in Jan. to 1.63 billion gallons in Feb. – a 47 percent decrease.”

One could argue that without the small refinery exemptions, domestic demand for ethanol might have been even higher than it is. But there is no disputing the fact that refiners are using more ethanol than they were a year ago, while exports have declined. Thus, the culprit for falling ethanol demand is clear. It is another casualty of the trade war.