Energy stocks have had an up and down year. But one segment of the energy sector has been unfairly punished in my opinion, even though it has been financially healthier than the rest. The midstream master limited partnerships (MLPs) — the companies that transport and store oil and gas – have largely reported solid financial results.

Alerian is an independent provider of energy infrastructure and MLP market intelligence. Its benchmarks are widely used to analyze relative performance of the MLP sector.

In the second quarter of 2018, the 22 constituents of the Alerian MLP Infrastructure Index (AMZI) – which represents 94% of the total midstream MLP market capitalization – generated on average about 30% more cash than necessary to cover their distributions. A year later, that excess rose to 40%.

Alerian’s latest research note from 11/12/19 reports more good news for the sector. Not one constituent of the AMZI or the Alerian MLP Index (AMZ) cut distributions in the third quarter of this year. That’s the first time that has happened since the second quarter of 2018. The research note further reported that over 80% of AMZ and AMZI constituents grew or maintained distributions year-over-year. 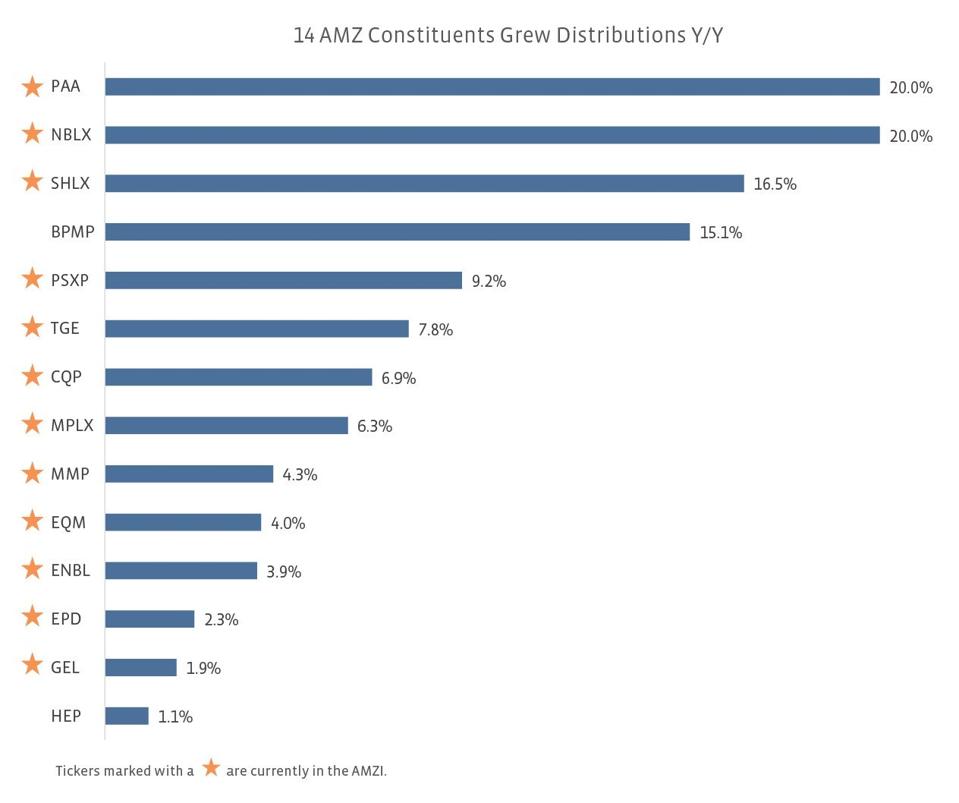 In addition, most of the major midstream MLPs are reporting positive earnings surprises for the third quarter. Yet this good news is marred by one of the worst MLP downturns in history.

Last week MLPs finished an 8th straight negative week. This is officially the longest negative streak in the history of the MLP sector. There have been 15 negative weeks for MLPs in the last 18 weeks, which has also never happened.

Why is this happening? MLP guru Hinds Howard, who runs the informative site MLPguy, recently summarized the segments woes:

“Interest rates spiked, which hurt yield-based equities like utilities and REITs, and probably didn’t help midstream, either. It was another week when it felt like midstream can only capture downside in the market. Oil prices up, stock market up on less concerns of global growth, but midstream sells off, because reasons that change from week to week.

Taking a step back, this prolonged and ongoing midstream weakness is due to a brutal combination of technical and fundamental forces. Technical headwinds from big slow institutional capital exiting MLPs while retail investors are throwing in the towel and selling to lock in tax losses after one more distribution payment. Fundamental headwinds from (investor-imposed) producer discipline driving down outlooks for those less diverse and more upstream-oriented midstream operators.”

Hinds notes that the carnage is largely limited to the midstream MLPs, as many midstream corporations have fared much better during the downturn.

Further, some of the non-midstream MLPs, like renewable energy company Brookfield Energy Partners, have had an outstanding year both financially and in the stock market. Brookfield units have now risen by 70% since the beginning of the year, against a decline of 11% for the AMZ.

But it may require patience, as sometimes it can take some time for investor sentiment to shift.