Last Friday, President Trump tweeted:  “Looks like OPEC is at it again. With record amounts of Oil all over the place, including the fully loaded ships at sea, Oil prices are artificially Very High! No good and will not be accepted!”

First off, it is no longer true that there is still record amounts of oil “all over the place.” A couple of years ago, global inventories were indeed at record highs. There was also a tremendous amount of oil in floating storage — the “fully loaded ships at sea.”

That’s no longer the case. The production cuts from OPEC have reduced crude oil inventories back into a normal range. This can be seen in the most recent Oil Market Report from the International Energy Agency: 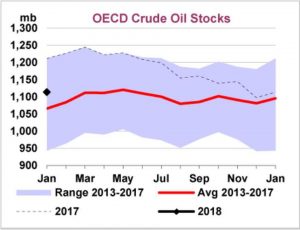 Further, as Bloomberg reported following President Trump’s tweet, oil in floating storage has declined sharply over the past year:

The amount of crude oil in floating storage globally has declined to 40.7 million barrels as of April 13, from 97.2 million barrels at the end of 2016 — a 58 percent drop — according to data from Vortexa Ltd.

“Our data does not suggest any recent builds in global floating storage volumes,” including in the Middle East, cargo-tracking company Kpler SAS said in a research note. Combined floating storage and oil in transit fell by more than 80 million barrels in the first three months of the year, Kpler said.

However, it is true that OPEC’s cuts have helped boost oil prices. One could then argue that oil prices are “artificially very high”, assuming that OPEC would have otherwise continued to overproduce and keep prices in the $30-$40/bbl range.

High Oil Prices: Then and Now

But would that have necessarily been a good thing? Let’s address that.

If a country is a high net importer of crude oil and finished products, then high oil prices will indeed result in a large outflow of dollars. In this case, oil exporters benefit at the expense of oil importers.

Crude oil and petroleum products play a significant role in the balance of U.S. trade accounts, and the value of petroleum trade is sensitive to both changes in price and volume. The United States has historically imported more petroleum and petroleum products than it has exported. The deficit reached a maximum of $452 billion in the third quarter of 2008, as a result of a sharp run-up in prices.

What has happened since 2008? U.S. net exports of petroleum and petroleum products have steadily declined. In 2011, the U.S. became a net exporter of finished products (e.g., diesel, gasoline, etc.) for the first time since 1949. Finished product exports have continued to grow since:

That isn’t yet the case when we include petroleum imports and exports, but the situation is headed in that direction.

Long gone are the days when the U.S. had to import 12 million BPD of crude oil and finished products. At that time, high oil prices were indeed a serious drag on the U.S. economy. But with U.S. net exports plummeting toward zero, this situation is rapidly changing.

The EIA noted as much: “Since 2009, exports of petroleum and petroleum products have played a growing role in reducing the overall merchandise trade deficit.”

If the U.S. ultimately becomes a net exporter of crude oil and petroleum products, then higher crude oil prices will bring more revenue into the U.S. In that case, the U.S. will be in the position of many OPEC members, with a net benefit to the economy from higher oil prices at the expense of oil importers like China.

Oil country is Trump country and most of the top oil-producing states like high oil prices. Rising oil prices have enabled U.S. shale oil production to rebound from the decline it suffered in 2016.

Low oil prices have historically devastated economies in states like Texas, which delivered more electoral votes to Donald Trump than any other state.

Not All Sectors Benefit

It is important to keep in mind that there are certain sectors that will be harmed by higher oil prices. Companies that rely on transportation, like airlines and shipping companies, could take a hit. Even refiners are susceptible to lower margins from rising oil prices. Higher oil prices can also reduce discretionary income as consumers pay higher fuel bills.

So it is important to understand the impact of higher oil prices on your portfolio. Rising oil prices can be a catalyst for profits, but you have to understand which sectors are likely to benefit.

In any case, the net impact of higher oil prices on the economy is quite different than it was a decade ago. And sometime in the not too distant future, high oil prices could become a net positive for the U.S. just as they are for Saudi Arabia.

Therefore, the notion that high oil prices are necessarily bad for the U.S. should be reevaluated.