In January of this year, as I do every year, I made several energy predictions for the upcoming year. (See My 2016 Energy Predictions). Now that half the year is in the books, I thought it might be a good idea to check in and see how these predictions are tracking.

As a reminder, I strive to make predictions that are specific, measurable, and preferably actionable. If forecasts are broad and vague, one can almost always declare victory. I would also remind readers that my predictions are based on what I believe will happen, which isn’t the same thing as predicting what I want to happen. My desire for a particular outcome has absolutely no bearing on a prediction. I am simply trying to accurately gauge the most likely outcome.

Here are the predictions, along with an update through the first half of the year.

1. U.S. oil production will suffer an annual decline for the first time in eight years.

I noted that I had the most confidence in this particular prediction. The only way I could foresee this one going awry was if oil prices made a strong recovery to $60/bbl very early on — which I didn’t expect to happen.

In this case, I will just let the graphic speak for itself: 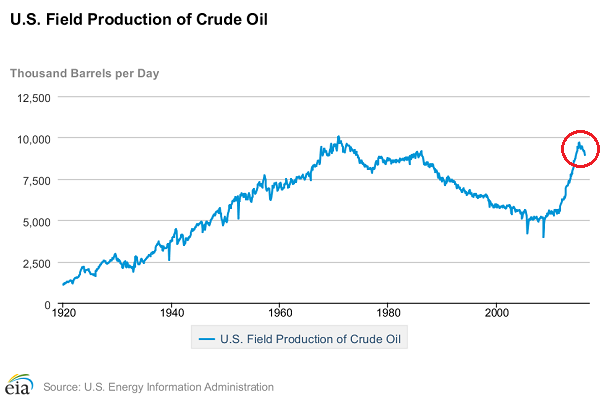 The numbers are only available through April of this year, but production has been falling pretty steadily now since last April. This still looks like the first time in eight years that year-over-year U.S. crude oil production will decline.

When I wrote that prediction, the price of WTI was $36.14/bbl. The price was going to require a gain of 66% from that price in order to be proven right. I noted that this was a very aggressive prediction.

I also noted that I would grade this one on a curve due to the aggressiveness of the prediction. I would consider it a complete fail if prices failed to crack $50/bbl this year, which was still 38% above the price at the time I made the prediction.

The price of WTI thus far has closed as high as $51.23/bbl, in early June. Despite a recent headline-making prediction by analyst Gary Shilling that the price will still fall to $10/bbl (a prediction he has been repeating for over a year), we have almost certainly seen the lows for this cycle.

However, there is also still resistance to the upside. There is a lot of shut-in production that will begin to come online if prices head toward $60, and the Brexit vote has fanned concerns of a stronger dollar and weaker demand. Further, global inventories are still at very high levels. Considering that oil has already moved up some $15/bbl since I made this prediction, it isn’t a huge long shot at this point that it will be realized.

3. U.S. natural gas production will suffer an annual decline for the first time in 11 years.

In 2015 monthly natural gas production averaged 2.252 trillion cubic feet (tcf) per month. Through April of this year that number has declined ever so slightly to 2.246 tcf/month. 2015 saw two months above 2.3 tcf/month, while thus far in 2016 there have been no months above this level.

This one is too close to call, but it is tracking according to the prediction at this point. On the other hand natural gas prices have strongly advanced since January, and that may spur more production in the second half of the year.

Despite my attempt to always make predictions that are specific and measurable, I realized after the fact that I failed to make an important distinction for this one. I didn’t indicate that the XLE would rise this much for the full year. The XLE has already crossed the 15% mark in 2016, which is impressive considering that it was already in negative territory when I made the prediction.

However, since then it has pulled back a bit and now stands at +12.3% year-to-date. But instead of declaring victory on this prediction, allow me to offer the important qualifier I inadvertently left off in January. I expect the XLE to finish the year up 15%.

As I said when I made this prediction “fundamentals will ultimately win out, and I think we will see the industry’s prospects start to improve before the end of 2016.” That has certainly happened, but a lot can still happen in the 2nd half of the year.

This prediction actually generated a lot of angry emails and comments on Facebook. I had people call me a moron for being so naive as to believe Hillary would beat Bernie Sanders, and I have had people tell me in no uncertain terms that “Donald Trump will win in a landslide.”

Meanwhile, Clinton has since dispatched Sanders (to which many of those previous Sanders’ defenders have invoked various conspiracy theories instead of acknowledging the defeat), while she is tracking well ahead of Trump in national polls.

I previously noted that the reason for this prediction is that it has significant energy policy implications. And I will once again remind readers that I predicted Clinton would win for one simple reason: I believe she will win, and I expect President Hillary Clinton to pursue energy policies similar to those pushed by the Obama Administration.

My midterm grades are looking pretty good at this point. I always note that things are always obvious in hindsight, but I got a lot of push-back on these predictions when I made them. I even heard from a Commander in the Indian Navy who said that my 2nd and 4th predictions “defy the current trends and assessment by other studies.”

For the second half of the year I feel like all are on track to be correct, with the greatest uncertainty in the prediction that oil prices will reach $60/bbl this year. That price is on the way, to be certain, but with inventories still as high as they are that could still push into 2017.