The U.S., that is, in total fossil fuel resources. At least those were the findings of the Congressional Research Service in a report they just released:

The primary reason is our huge coal reserves. While we are 12th in oil reserves (Table 5 of the report), our coal reserves are by far the largest in the world. All together, the fossil fuel reserves (oil, natural gas, and coal) of the U.S. are reported at just under one trillion barrels of oil equivalent (BOE). The global total is reported at 5.6 trillion BOE.

While I think you have to take data from some of the listed countries with a grain of salt – especially when talking about categories like “undiscovered technically recoverable” oil and natural gas – it does point to the importance that coal will play when oil reserves start to seriously deplete. I have said this before, but when gasoline is $5/gallon, most objections to coal as a fuel will disappear. At that point I think you will start to see coal-to-liquids (CTL) plants moving forward.

Also from the report, at first glance this chart may seem ridiculous: 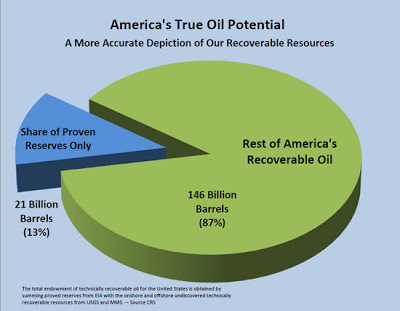 Of course it goes without saying that government policies will heavily influence which resources are developed, and over what time period. My guess is that over the next few years we will favor policies that are intended to wean us off of fossil fuels. While I applaud good intentions – and in fact my new job is all about moving developing fossil fuel replacements – I expect we are going to see more than a few unintended consequences. The one I am most concerned about is heavily disincentivizing domestic production, but not having an adequate answer for the domestic production shortfall. In this case, while more alternative energy may be the target, more oil imports may be the unintended consequence.