Update 12-09-09: All of the scammer’s websites that he tried to use when scamming me are now offline. Further, I am cooperating with the authorities to actually track him down and bring him to justice. You can read about the initial account here: Exposing a Two-Bit Scammer

Update 12-03-09: This saga has also been mentioned over at The Consumerist. (And thank you to people who have forwarded me game keys). There are two things I want to clear up. First, I am not the person who posted the story at Reddit. I only became aware of the story because I saw the traffic coming in from Reddit on my Stat Counter.

Second, a number of the commenters at The Consumerist have alluded to the idea that I was trying to buy illegal keys. That is absolutely untrue. I have the software and licenses already, and I had it installed on the computer I was using. I was attempting to buy another pair of licenses so my son and I would both have licensed copies so we could play online together. People do legally sell licenses to software all the time. (As one poster at the Consumerist noted, the Consumerist has hosted “morning deals” for Diablo CD keys). I just looked around and thought I found the best deal. If I buy your licensed copy from you, there is nothing illegal about you selling it to me. And since I have the software, all I needed was a license. (Explained well by this commenter at The Consumerist).

I have a hard time believing that if people are setting up websites and selling cracked licenses that Blizzard isn’t shutting them down. After all, the last time I checked Blizzard’s attorneys had essentially stopped people from selling game items on eBay – and this used to be a big business. So I had no reason to think there was anything shady here. Come on, do you think I would have written about it if that was the case? If people are setting up websites – and advertising with Google Ads – to sell cracked licenses, then this is news to me. But I admit this is not something I know a whole lot about.

Update 12-02-09: For those linking in from Reddit, yes, www.d2key.com is the same guy running the scam at www.diablo-keys.com. (Update 12-07-09: As of today both sites are offline, as is that of the fake law firm. The former because the guy “sold out” of keys. LOL! If you follow any of the threads below, that mantra of “I am making loads of money” is very consistent with the behavior of my scammer; he would make this claim in every e-mail he sent to me. He apparently has a self-esteem problem, trying to compensate for his inadequacies by lying about making lots of money).

For those who doubt this, here are screen shots showing both sites at the same IP address (courtesy of Reddit viewers): 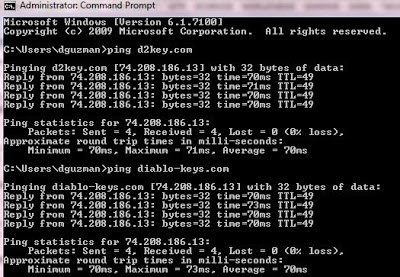 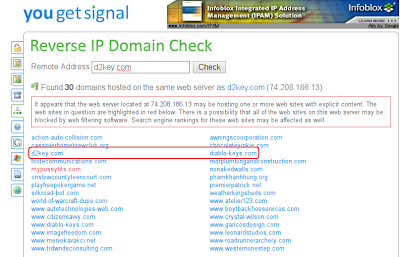 Regarding that, our scammer says “I do not have a good response for that (yet).” Translation: I haven’t yet thought of a plausible explanation for that. He has now changed it, but that was the case earlier today. There are also reports at Reddit that the initial support e-mail was listed as the same for both websites (again, now changed). I also have very specific other proofs that I am not going to share publicly, but have shared with Reddit moderators.

File a claim with PayPal immediately and let them know what he is doing. He reinvented himself because PayPal banned him for running the original scam (more on that below). This guy isn’t just a scammer, he is a complete scumbag; twice threatening to harm my elementary school aged son. (I published one of the threats below; the first one was so graphic and horrible I am not publishing it).

He will be glad to know that he is getting the kind of exposure I promised him: around 3,000 views from Reddit today and rising. Thanks Reddit readers! Oh, and someone at Reddit proved that the “law firm” threatening to sue – Karlson and Karlson – is indeed fake as I presumed. Too bad. I wanted to see this scumbag in court.