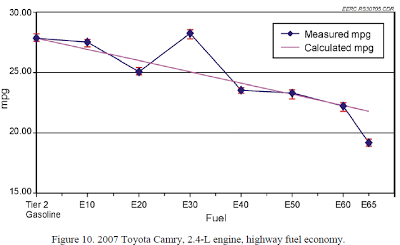 On November 16, 2007 a study was released that stirred up a lot of excitement in ethanol circles. The study was titled Optimal Ethanol Blend-Level Investigation. The study was commissioned by the American Coalition for Ethanol (ACE), and the work was carried out by the University of North Dakota Energy & Environmental Research Center (EERC, a branch of the University of North Dakota) and the Minnesota Center for Automotive Research (MnCAR, a branch of Minnesota State University).

The study made some remarkable claims. Based on some data points – such as the point corresponding to E30 in Figure 1 above (which is Figure 10 in their report), they claimed that higher ethanol blends could get better fuel economy than pure gasoline. ACE captured their interpretation in a press release:

Previous assumptions held that ethanol’s lower energy content should always directly correlate with lower fuel economy for drivers. Those assumptions were found to be wrong. Instead, the new research strongly suggests that there is an “optimal blend level” of ethanol and gasoline—most likely E20 or E30—at which cars will get better mileage than predicted based strictly on the fuel’s per-gallon Btu content.

Some of their “key findings:”

• This research, however, did not find ethanol’s Btu content to be a direct predictor of fuel economy. All four vehicles tested exhibited better fuel economy with the ethanol blends than the Btu-value estimates predicted.

• E30 offered better fuel economy than gasoline (a 1% increase) in both the Toyota and the Ford.

• E20 offered better fuel economy than gasoline (a 15% increase) in the flex-fuel Chevrolet.

• The non-flex-fuel Chevrolet more closely followed the Btu-calculated trend for fuel economy, but did experience a significant improvement over the trend line with E40 (40% ethanol, 60% gasoline), indicating that this may be the “optimal” ethanol blend level for this vehicle.

• The Ford Fusion operated on E45, the Toyota on E65, and the non-flex-fuel Chevy on E55. No engine fault codes were displayed until these levels were surpassed.

Of course these results are quite counter-intuitive, and I am always very careful when dealing with counter-intuitive results. Adding to the unusual results was the fact that the research was funded by a group whose purpose is to further ethanol, and the results of the study were certainly to be taken with a grain of salt. Note as well the spin. Look at Figure 1, and then consider the claim from the ACE press release: All four vehicles tested exhibited better fuel economy with the ethanol blends than the Btu-value estimates predicted. This is on the basis of that one point that looked to me like a classical outlier.

But that didn’t stop ethanol boosters from promoting the results. I have discussed these claims on numerous occasions, dealing with comments like these:

Ethanol has an Octane Rating of 113 AKI (compared to 86 for straight gasoline.) This means that even though it’s “energy content” is lower, it can achieve much greater Efficiency than gasoline when burned in a proper engine.

That’s why recent tests, such as the one performed by N.Dakota Univ, and Mn State, show that, when burned in newer vehicles, E20 gave slightly better mileage than straight gasoline in three of four cars tested.

If I had one of these three cars, and access to a blender pump, like they do in areas of S Dakota, Mn, Ia, and Wi, I could choose an ethanol product that would give me better mileage than straight gasoline.

If you can take any other conclusion out of that study You’re not being honest.

Some of my comments in response:

Now, what I would say about the study – but again, this is the objective view – is “That’s an interesting finding. Let’s replicate it in an independent lab that isn’t paid for by the ethanol lobby.”

Figure 10. 2007 Toyota Camry, 2.4-L engine – 6 of 7 tests show worse fuel efficiency on an ethanol blend. There is one apparent outlier, which was the basis for the claims. (And it looks like a classic outlier, with almost all of the other points falling as predicted).

So, what can we conclude? Of 25 data points, 18 confirm that the fuel economy is worse on an ethanol blend. That is 72% of the tests, and these tests were paid for by the ethanol lobby (which is why I suspect the results were spun as they were). The outliers are interesting enough for further investigation, but you have vastly overstated the test results. In reality, if you pulled the results out of a bag, you have only a 28% chance of improving your fuel efficiency on the basis of any particular test. Further, the outlier didn’t always occur at the same percentage, which would be quite problematic even if the result is confirmed.

So the ethanol boosters were perhaps not surprisingly ready to take these results at face value, arguing that it makes sense to boost the ethanol blended into our gasoline. I will say that if you could get better gas mileage on E20 than on pure gasoline, it would in fact be a strong argument in ethanol’s favor. But given that it is such a counter-intuitive result, it needed to be replicated. As a reader recently pointed out to me, NREL tried and failed:

The key findings from the NREL test:

• All 16 vehicles exhibited a loss in fuel economy commensurate with the energy density of the fuel.*

• Limited evaluations of fuel with as much as 30% ethanol were conducted, and the reduction in miles per gallon
continued as a linear trend with increasing ethanol content.

*This result was expected because ethanol has about 67% of the energy density of gasoline on a volumetric basis.

Note that NREL is pro-ethanol, and the goals of blending more ethanol into the U.S. gasoline supply would be more easily accomplished had the ACE-sponsored study been confirmed. Instead, the NREL study gave the expected results: As more ethanol was blended, the fuel economy fell commensurate with the energy density as a linear trend. None of the outliers found in the previous study were observed.

My calls for caution on the initial tests were sometimes misrepresented:

I post a test conducted by two fine Universities, and you denigrate the students, and professors who conducted the tests (using the EPA cycle) as Biased.

Of course I never denigrated the students or professors involved. I said that based on the counter-intuitive results, and the fact that a vested interest paid for the research, we needed independent confirmation. There are all kinds of possible sources of error in scientific testing, which is why unexpected results need to be confirmed. The cold fusion fiasco is a perfect example of why we do this. Instead of waiting for confirmation, Pons and Fleischmann took their very unexpected results to the press. This tactic blew up in their face when other researchers failed to replicate the results.

A call for replicating results is not an insinuation that anyone faked the tests; it is instead simply because tests can be wrong for many different reasons. I can tell you that if the American Petroleum Institute conducted a test and found the opposite – that fuel economy dropped more than one might expect – I would expect ACE to denounce the tests and call for more testing.

At this point, I think it would be foolish for ethanol boosters to continue pushing the results of the initial tests. I would still like to see some additional work done in this area, because there is evidence that ethanol can perform at a higher economy than expected if it is used in a high-compression engine. But there is no reason to believe that an ethanol blend in a normal gasoline engine can give better fuel economy than can pure gasoline – which is exactly how the results of the ACE study were spun.

144 thoughts on “An Urban Legend Falls”