The following guest essay was written by Paul Symanski. Paul is an electrical engineer with expertise in solar energy, and shares his views on why solar power often faces unnecessary headwinds.

To anyone who has ever spent a day in Arizona’s Valley of the Sun, it is obvious. The sunniest state in the nation is blessed, cursed, with a fierce sun. Yet, as one explores the landscape, artifacts of the capture of solar energy are conspicuously absent. This dearth is true for solar electric, domestic hot water, passive solar design, and even for urban design. It is as if the metropolis stands in obstinate defiance against the surrounding desert and its greatest gift.

Yet, the incessant sun is a constant agitator. Even visitors happily distracted by the Valley’s many amenities will remark while lounging by the pool, drinking in the clubhouse, or enjoying a repast on a misted patio, “Why doesn’t Arizona use more solar energy?”

One answer to this persistent question can be found once one comprehends that Arizona is where it first occurred: where solar energy first became economical.

Around the turn of the millennium, four decades after its destiny was foretold, an investment in electricity generated by an on-site photovoltaic system became a better investment than traditional investment vehicles. Finally, solar energy had become economically transcendent. Because of its abundant solar resource, solar energy’s transcendence occurred in the center of the desert Southwest, in sunny Arizona. It may not be mere chance that this tipping point coincided with the world’s peak production of petroleum.

The concept of “grid parity” has been promulgated by an energy regime that sees the world through grid-centric eyes. A more accurate and revealing comparison is investment parity. This approach more completely – and perhaps more directly – accounts for the myriad hidden costs embedded in the economics of the world’s energy system. Both the recent economic troubles and the fact that the solar tipping point occurred during an historical low for electricity prices in Arizona reinforce the validity of economic ascendancy of solar energy.

Implicit in the concept of grid parity is an ultimate arrival where both sides rest in balance upon the fulcrum. This subtle point of terminology further invalidates the utility of the concept of “grid parity”. The balance will likely be a brief moment of hushed breath . . . before the tipping continues in favor of solar energy.

The concept of grid parity also establishes a false dichotomy that reveals the term to be an indirection. Solar energy should be one of a multitude of energy sources to be impartially and intelligently incorporated into a flexible network of energy sharing. The concept of grid parity is a creation of a hierarchical system of centralized generation and distribution. Like the system that created it, the term ‘grid parity’ should be recognized for what it is.

The concept of a tipping point is a more appropriate metaphor. It is this tipping point that those favored by the status quo vigorously resist.

It is crucial that energy costs be accurately accounted in order to establish valid policies. Yet, in any forum where energy is discussed (present company excepted), retail energy costs are typically presented as an average, or as a range of values. Even in conversations amongst economists, engineers, scientists, business leaders, policy makers, and others who help guide our energy future, superficial valuations proliferate. Blunt statements of cost nearly always exclude associated economic, competing, and externalized costs. More dangerously, such simplification disguises a complex and telling reality.

The key observation – and the linchpin of the Rate Crimes exposé – is that the avoided cost value of solar electricity and other energy management strategies has long been dramatically lower than the retail cost of electricity under particular rate plans.

The graph below plots the avoided cost value of on-site solar electricity against retail energy costs under the Arizona Public Service E-32 commercial rate schedule for the summer season. The ranges of kilowatt demand and kilowatt-hour consumption reflect those of small businesses. 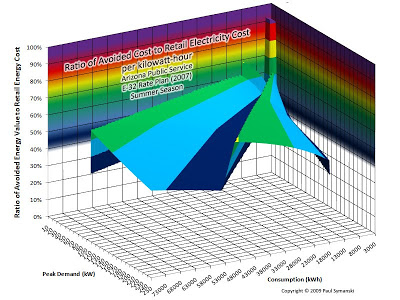 Of the hundred largest electric utilities (by customers served), fourteen are located in the sunny Southwest (excluding the unregulated utilities in Texas).

Of these fourteen, three have commercial rate plans with structures that most defeat the value of solar energy and energy conservation measures. These utilities are: Arizona Public Service, Salt River Project, and Tucson Electric Power. All are Arizona utilities.

The Arizona rate schedules provide an enormous subsidy and encourage prodigal consumption by discounting energy to the largest energy consumers. This was historically a common situation in other places as well. However, Arizona is special due to its extraordinary solar resources.

The pricing system redirects costs from any apparent savings in the residential and industrial sectors into the small commercial sector. Small commercial ratepayers have less capital, have fewer person-hours to commit to unusual projects, have less-diverse expertise, and are often constrained from making modifications to their premises. The redirection of costs into this captive market creates a hidden tax through the higher costs of goods and services, and through the subsequently higher sales tax charges.

As you may surmise, nearly the entire Arizona economic and political system is complicit. Beyond Arizona’s borders, the state’s electricity generation from coal and nuclear sources remains the West’s dirty little secret. Environmentally conscientious Californians can nod appreciatively at their Tehachapi and San Gorgonio Pass wind farms; while behind the turbines, on the eastern horizon, the cooling towers and smokestacks of Arizona keep bright their nights.

All Arizonans need to be able to gain full value for investments in energy conservation and in solar energy. Until Arizona’s repressive rate schedules are reformed, energy efficiency measures and solar energy in the nation’s sunniest state will have diminished value. This diminishment of the value of solar energy affects all of us by delaying a cleaner energy future.

Paul Symanski is an electrical engineer, designer, human factors specialist, marketer, machinist, graphic artist, musician, LEED AP, and economist born of necessity. He is experienced with renewable energy, including expertise in solar energy both in practical application and in the laboratory. He is also a competitive masters-level bicyclist. ratecrimes [at] gmail [dot] com