I don’t know if this is a first, but it’s the first time I have heard of an oil tanker being hijacked:

(CNN) — Pirates in the Arabian Sea have hijacked a Saudi-owned oil tanker with 25 crew aboard, the U.S. Navy and the British Foreign Office confirmed on Monday.

Eleven vessels are currently being held by pirates hoping to secure ransoms for their release, according to The Associated Press. They include the Ukrainian-owned MV Faina, which was hijacked in September along with 200 crew and a cargo of weapons and T-72 tanks. 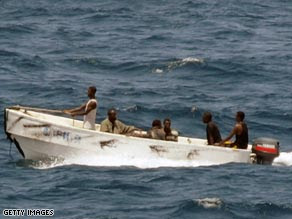 That is the picture that accompanied the CNN story. I have a hard time understanding this. How is it that a bunch of guys in speedboats can hijack so many ships?

Why is it that these ships don’t have a few mounted .50 caliber machine guns on board and some guys trained to use them? It looks to me like the boat above would be at a severe disadvantage in a situation like that. Sink a few, and the problem should diminish.

But it must not be as simple as it seems to me. What are the laws on the sea? Could you open fire on pirates and sink their boat? Or are there laws in place that limit this sort of response? There must be some sort of explanation for why this problem persists, but I don’t know what it is.

It will be interesting to see how the Saudis play this one.