In Part I, I presented the notes on renewable energy that I took as I read through the 2008 International Energy Agency (IEA) World Energy Outlook. Here in Part II, I organize those notes, and then provide some general comments and conclusions. I am now offline for a few days. Happy holidays to those who celebrate Thanksgiving.

As I read through the 2008 International Energy Agency (IEA) World Energy Outlook, I had the distinct impression that I was reading contributions from people with completely opposite points of view. The pessimist warned that we are facing a supply crunch and much higher prices. The optimist in the report said that oil production won’t peak before 2030.

I guess the good news then is that there is something in there that will appeal to everyone, regardless of your outlook. The bad news? The claims that are directly opposed to your views will have you questioning the credibility of the report. And if you are like me – and note that between last year’s report and this year’s report they dropped their 2030 oil demand forecast by 10 million bpd – you are left wondering whether there is any credibility at all in forecasts that far out.

But for what’s worth, here’s what the IEA had to say about renewable energy.

China and India will be responsible for over half of the increased energy demand between now and 2030. Global demand for oil (excluding biofuels) is forecast to rise from 85 million bpd in 2007 to 106 million bpd in 2030. This forecast was revised downward by 10 million bpd since last year’s forecast.

World demand for electricity forecast to rise from 15,665 TWh in 2006 to 28,141 TWh in 2030. Renewable energy will displace gas to become the second largest producer of electrical energy by 2015, but will still lag far behind coal. For OECD countries, the increase in renewable electricity is greater than the increase in electricity from fossil fuels and nuclear. The share of nuclear power in the world energy mix falls from 6% in 2008 to 5% in 2030.

Electricity generation from PV and CSP in 2030 is forecast to be 245 TWh and 107 TWh, respectively. Solar PV will continue to have the highest investment cost of all commercially deployed renewable energy sources.

Global output of wind power is forecast to grow from 130 TWh in 2006 to more than 660 TWh in 2015 to 1,490 TWh in 2030. It will become the 2nd largest source of renewable electricity (after hydropower) by 2010. Potential for hydropower in non-OECD countries is still large. Most good sites in OECD countries have been utilized.

Energy storage is rarely the cheapest way of dealing with variability of wind and solar power, but several next generation storage technologies are under development. These include ultracapacitors, superconducting magnetic systems, and vanadium redox batteries. Electrolysis to produce hydrogen, later used in fuel cells on demand is an option, but the overall efficiency is only 40%.

The reference scenario presumes that by 2030 the U.S. will only meet 40% of the biofuel mandate set in 2007. In Brazil, biofuels are projected to account for 28% of road-transport fuel demand by 2030. The present amount supplied is equivalent to 13% of road-transport fuel demand. Demand for biodiesel is expected to grow faster than demand for ethanol.

Biofuels in 2006 provided the equivalent of 0.6 million bpd, representing around 1.5% of global road transport fuel demand. The United States is the largest user of biofuels, and most of the recent growth has been in the U.S.

The share of biofuels in road transport fuels is forecast to grow from 1.5% in 2006 to 5% (3.2 million bpd) in 2030. Second generation biofuels based on lignocellulosic biomass, converted via enzyme hydrolysis or biomass gasification (BTL) are expected to become commercially viable. However, the contribution will be minor, and not until after 2020. Capital costs for cellulosic ethanol are “significantly more” than sugarcane or grain-based facilities. As a result, full commercialization hinges on “major cost reductions.”

The United States and Brazil both export soybean biodiesel to the EU. Some countries are beginning to scale back their biofuels policies due to concerns about environmental sustainability. Shortages of water availability will be a potential constraint for further expansion of biofuels.

Most biomass will still come from agricultural and forestry residues in 2030, but a growing portion will come from biomass farmed for biofuels. A growing share of biomass is also projected to fuel combined heat and power (CHP) plants.

Hybrid vehicles are commercially viable today; electric vehicles have yet to gain traction. Electric vehicle technology is advancing rapidly, but further improvements in storage technology are needed for efficiency and cost improvements. Long term, electric hybrids, fully electric vehicles, and fuel cell vehicles have the most potential for minimizing the need for oil-based fuels. In the very long term – projecting out to 2050 – fuel cell vehicles are forecast to make up 33% to 50% of new vehicle sales in the OECD.

Cumulative investment in renewable energy between 2007 and 2030 is projected to be $5.5 trillion, with 60% of that for electricity generation.

The report reiterates the points I have argued on numerous occasions: Biofuels will not scale up to produce more than a small fraction of our fuel demand, and even then with potentially serious consequences. While the report spreads the blame for higher food prices on a combination of competition with biofuels, higher energy prices, poor harvests, and various agricultural policies, it correctly identifies water as a (highly underrated) issue in the future scaling of biofuels. On the other hand, the report identifies Latin America and Africa as regions with the potential for boosting biomass production by modernizing farming techniques.

I think the report correctly identifies renewable electricity and renewable heating (especially solar water heating) as areas poised for growth. However, it also predicts that carbon dioxide emissions will continue to rise. This was a controversial issue I tackled earlier in the year, when I predicted “we won’t collectively do anything that will reduce worldwide greenhouse gas emissions.”

The following figure was very interesting to me: 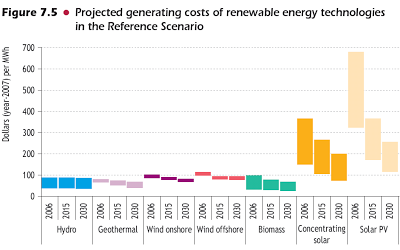 This figure suggests that by 2030, the cost for solar PV and CSP will still be higher than all other renewable technologies are today. And not just a little higher; solar PV is predicted to be twice as expensive in 2030 as hydro and onshore wind are today. So much for Moore’s Law applying to solar PV.

However the nagging issue for me is the credibility of the predictions. How much stock can I put into the renewable energy predictions from an agency that thinks oil production won’t peak until 2030, and that demand will exceed 100 million bpd (contrary to the opinions of two Big Oil executives)?

The renewable energy portion was a tale of two technologies: Renewable electricity and renewable biofuels. Renewable electricity is forecast to grow rapidly, and make up an increasing portion of electricity supplies. The share of nuclear power falls, but coal usage is projected to rise 60% by 2030 (with 90% of that increase in non-OECD countries). The expected increase in coal usage helps explain why greenhouse gas emissions are forecast to continue rising.

Renewable biofuels, by contrast, are forecast to still make a very small contribution to overall road transport fuel by 2030. Cellulosic ethanol will be slow to be commercialized, and the contribution to fuel supplies by 2030 is small. Concerns about negative externalities will grow, and the impact of biofuel production on water supplies will be hotly debated.