I was recently pointed to a new survey on energy conducted by the Pew Research Center for the People & the Press. I have to admit that I do not know the political leanings (if any) of this organization. The surveys on their homepage looked pretty balanced to me. Regardless, I was pretty surprised at the results of the survey, a summary of which can be found here. 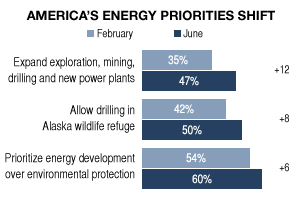 The public’s changing energy priorities are most evident in the growing percentage that views increased energy exploration – including mining and drilling, as well as the construction of new power plants – as a more important priority for energy policy than increased conservation and regulation. Nearly half (47%) now rates energy exploration as the more important priority, up from 35% in February. The proportion saying it is more important to increase energy conservation and regulation has declined by 10 points (from 55% to 45%).

There were still sharp contrasts on the topic of drilling in ANWR. 75% of Republicans favored this, while only 36% of Democrats did. The poll also showed a trend of greater support for ANWR drilling at successively greater age groupings. Only 37% of those 18-29 were in support of ANWR drilling, while 62% of those over 65 favored ANWR drilling.

The poll also asked about views on the war in Iraq, but these had changed little since the last survey in February.

I have been asked a number of times for my own views on this topic, and I will soon post something on the subject.