Over the weekend, I happened onto a link for a German car that is being designed for an amazing 157 miles per gallon (1.5 l/100 km). The car is called the Loremo, an ultra-light, two-cylinder, 20-horsepower, turbo-diesel with an price tag of about $15,000 U.S. 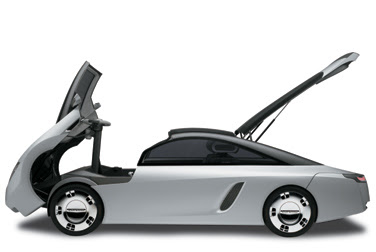 After poking around a bit, I found that there is a history of ultra-light vehicles, but they have not sold well:

Driving On The Light Side

In 1999, German carmaker Volkswagen launched the Lupo 3L TDI in Europe, a no-frills subcompact that got 100 km on 3 L of gas. Volkswagen built 29,500 Lupo 3Ls and then last year yanked the car from the market. “It was too frugal,” says Hartmut Hoffmann, a product spokesman for VW. “Customer interest faded.”

In 1997, Ford announced plans for what it called the P2000, which promised to be 40% lighter than conventional family sedans. And in 2002, Opel, the European subsidiary of General Motors, unveiled the Eco-Speedster, a sleek, low-riding sports car that gets 2.5 L of fuel to 100 km. But none of the manufacturers ever intended to offer their ultralight cars for sale.”

But with fuel prices at historic highs, all that may be about to change. CEO Heilmaier says 10,000 people have signaled interest in buying a Loremo since March, when a model was shown at the Geneva auto show. That’s not bad for a car that hasn’t even been driven yet. The first drivable prototype is to be built this year, and Sommer expects to go into production of the first 5,000 to 10,000 cars in 2009 and ramp up to 100,000 by 2012. If consumers are finally ready to embrace radical fuel efficiency, then Sommer and his team will have truly nailed it.

Let’s just hope it all works out per the design. Personally, I think that’s a good looking car. If fuel prices stay high, they will probably fly out of the showrooms.

13 thoughts on “The Ultra-Light Loremo”