A few months back, Jeff Goodell, a contributing editor at Rolling Stone, contacted me with some questions about ethanol. Jeff’s name may be familiar to those in the energy business, as he is the author of Big Coal. (Jeff has authored several books, including Trapped, which resulted in an appearance on Oprah, Sunnyvale, and The Cyberthief and the Samurai, which is about hacker Kevin Mitnick.) What started out as a piece in Rolling Stone on Vinod Khosla ended up being a critical look at ethanol. And some of my comments even survived the editor’s hatchets:

Ethanol Scam: Ethanol Hurts the Environment And Is One of America’s Biggest Political Boondoggles

Don’t let the soft title fool you. Jeff pulls no punches. 🙂 My comments are on Pages 2 and 3. Once again, Khosla’s scenario in which the world runs on carbohydrates is followed by mine in which I argue that you can’t mandate technology. The fact that this is in Rolling Stone should help build credibility with my wife and kids. It’s not the cover of Rolling Stone, but the story is on the cover (upper left). In fact, the cover goes to my all-time favorite band: 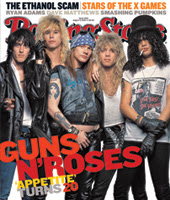 I can’t take credit for the best quote, though. I have to give that honor to Dave Juday. When asked about the 36 billion gallons of alternative fuels mandated by the energy bill, Juday said:

“It’s like trying to solve a traffic problem by mandating hovercraft. Except we don’t have hovercraft.”

Now that’s funny. I wish I had said that.

Incidentally, at one point during our exchanges, Jeff told me that Martin Eberhard, the CEO of Tesla Motors was reading this blog, and my exchanges with Vinod Khosla. Jeff wrote:

On a personal note, you’ll be amused to know that your name came up in a conversation I had a week or so ago with Martin Eberhard, the CEO of Tesla Motors (maker of $100,000 electric roadster). He was talking about the problems with ethanol, and he said something like, “There’s been a great debate about Vinod’s ideas on the web, on a blog called R-Squared. Have you seen that? It’s great! I want to hire that guy!” So if things don’t work out in Scotland, you can always head to Silicon Valley!

Yes, I was amused. Jeff wrote that on March 10th, and I have been waiting almost half a year for a chance to work it into a post. 🙂 It makes me wonder just who might drop in now and again.

Tesla Motors. Well, I wouldn’t want to live in Silicon Valley, but I certainly think electric cars are the way we ultimately have to go. Maybe Tesla could just hire me to endorse the car and trash the opposition. Or maybe that’s been my angle all along, and is the reason I am arguing for an electric transportation infrastructure. It’s my exit strategy from Big Oil.

Martin, I presume my check is in the mail. 😉