The following story from Bloomberg caught my eye today:

U.S. production, forecast to increase more than 70 percent by 2012, will use 37 percent of the country’s current corn supply to meet output needs, up 15 percent from 2006, Datagro said. Land for soy oilseeds is increasingly being diverted to grow corn, reducing soy supply and driving up animal feed prices, according to the company. In China, competing demand for corn from the food and ethanol industries may lead the country to reduce exports and become a corn importer, Datagro said.

I think food versus fuel is shaping up to be a serious problem. While this dilemma exists even for gasoline (higher gas prices drive up costs for farmers and stretch people’s budgets) the tradeoff needs to be a good one. But the Bloomberg article concludes:

World ethanol production is forecast to total 34.5 million liters in 2006, representing 3 percent of global demand for gasoline, according to Datagro.

They must mean 34.5 billion, not million. This doesn’t seem to me like a very good tradeoff. Drive food prices higher, and we have yet to displace 3% of global gasoline demand, let alone global fossil fuel demand (much of the world outside the U.S. is largely diesel-driven). For just the United States, 34.5 billion liters would only displace about 4.6% of our annual gasoline consumption (much less on a net basis; that is if we subtract out the fossil fuels that went into producing the ethanol).

I can think of solutions that don’t have the food versus fuel dilemma. As previously discussed, we can gasify biomass, turn it into electricity, and use that to drive our PHEVs. Or, we could do more to encourage conservation. What would it take to just get a 2% reduction in fossil fuel usage? We would get lower greenhouse gas emissions while reducing global demand for fossil fuels. Yet we will do it without driving up food prices. We could encourage a move toward diesel transportation, as they have done in Europe.

On the other hand, here is a story about a biofuel that I think makes good sense to pursue:

In this case, the biofuel in question, biodiesel, has a much higher BTU value than ethanol. A diesel engine is also much more efficient than a combustion engine. The producers of palm oil are tropical countries, many of them very poor African nations that could greatly benefit from new markets for palm oil. The major caveat, though, is that we have to be careful not to encourage the expansion of palm oil plantations as the expense of rain forest.

The following graph (source unknown) shows the potential of palm oil for biodiesel: 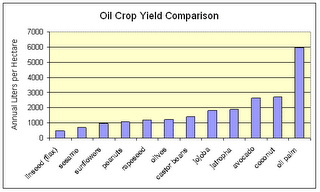 The palm oil yield is 6,000 liters per hectare. In comparison, the ethanol yield from corn is about 3,700 liters per hectare, yet the energy content is equivalent to less than 2000 liters an acre of plam oil. As stated previously, there is also an efficiency advantage from burning palm oil or palm oil-derived diesel in a diesel engine. The result is that it would only take about 1700 liters of palm oil to displace 3,700 liters of ethanol. (See this essay for why 1 gallon of biodiesel is worth 2.25 gallons of ethanol). Looking at that chart, that means that an acre of palm oil can displace over 3.5 acres of corn ethanol.

I have made the case before that the biofuel we should put the greatest effort into developing is biodiesel. I believe that biodiesel, along with sugarcane ethanol and a healthy dose of conservation, can go a long way toward weaning the world off of fossil fuels.