I hope it is clear that my opposition to ethanol has nothing to do with the fuel itself. If we could make sufficient ethanol with little or no fossil fuel inputs, ethanol could be a very important piece of a post-petroleum future. If ethanol could be produced with an EROEI of 3 or 4, as opposed to the current 1.0-1.3 or so, then ethanol begins to look attractive from a sustainability standpoint. My opposition to ethanol is due to the way we typically make it in the U.S., and is specifically focused on grain ethanol. We take fossil fuels and basically recycle them into ethanol in a very inefficient manner. Ethanol production may be a good solution for countries like Brazil, that don’t rely on large fossil fuel inputs into the process (as long as they aren’t depleting their topsoil and cutting down their rainforests). Cellulosic ethanol may ultimately provide ethanol at a substantially better energy return than grain ethanol, but as a recent Car & Driver article put it: “If cellulosic ethanol were easy, it would already be on the road, because the government has been seriously funding research for about 30 years.”

There are even some places in the U.S. where ethanol could provide a (mildly) sustainable solution even as it is produced today. Take Iowa, for instance. Iowa has good corn yields and doesn’t require irrigation. If the ethanol is produced from local corn, and is used locally (not shipped halfway across the country), the renewable portion of ethanol is increased. This may provide marginal mitigation for peak oil in certain local areas (though it is still not a highly efficient way to produce fuel). But get into areas outside the Midwest, where you have to ship corn a long way, ship ethanol a long way, and/or irrigate the corn, and ethanol rapidly becomes just a recycled fossil fuel. However, a couple of months ago a poster referred me to a company that is attempting to produce ethanol in a more sustainable manner. The company is E3 Biofuels. Their concept is this: Grow corn, produce ethanol, feed the byproducts to cattle, harvest the manure, produce methane from the manure in a biodigester, use the methane to fuel the boilers, and use the remaining solids to fertilize the soil. This is ethanol production in more of a Brazilian mold (i.e., byproducts are used to fuel the process). 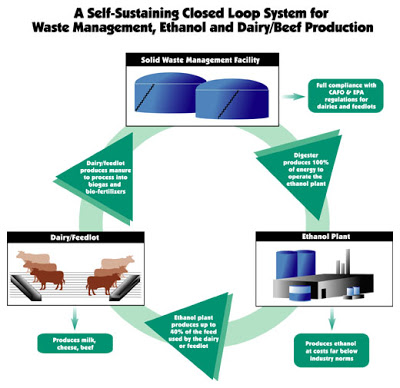 E3 Biofuels’ Closed-Loop Ethanol Process
I had some skepticism about whether they could produce enough methane to completely provide the energy needs of the plant, so I contacted the company. I was sent a spreadsheet from one of the project managers that estimates the energy inputs and outputs of the plant. I was correct that supplemental natural gas will be needed, but due to the manure-produced biogas, the amount is estimated to be substantially less than for a typical grain ethanol plant. Based on the spreadsheet I was sent, as well as correspondence I had with the project manager, the fossil fuel usage is estimated to be 75% less than that of a standard grain ethanol plant. If these estimates turn out to be accurate, that would quadruple the EROEI of the process. The project manager with whom I corresponded indicated that while there are a number of animal waste digesters, their facility will be the first to use the biogas in a closed-loop process. It is important to note that the process has not yet been proven. They are in the final stages of constructing their facility near Mead, Nebraska. They expect to finish the facility soon, and should be producing ethanol by September 1st. Their location has one disadvantage, however, and that is the need to irrigate corn in Nebraska. That means that the overall EROEI would not be as high as for a facility built in Iowa or Minnesota, for instance. If the process works as advertised, the EROEI could reach 4 or 5 to 1, or even higher for the same process in Iowa where corn irrigation is not required. Clearly, as I have argued in the past, ethanol is not going to lead us to energy independence. We simply don’t produce enough corn for grain ethanol to be a large part of the solution (it will certainly be no more than 20% by volume of our current fuel usage), and therefore conservation is going to have to make the biggest contribution toward sustainability. But if ethanol is going to be part of the solution to diminishing oil supplies, E3 Biofuels is the first in the U.S. to show the way toward making ethanol in a more sustainable manner. As natural gas supplies diminish, many ethanol producers are turning to coal as a fuel source. E3 Biofuels, on the other hand, may become the poster child for clean, “green” ethanol. As a long-time ethanol skeptic, the approach by E3 Biofuels is the first U.S. grain-ethanol process that I endorse.