One of the under-reported factors behind the ongoing diesel shortage is the loss of U.S. refining capacity since the start of the Covid-19 pandemic. Today I will discuss the factors that led to this loss.

According to the Energy Information Administration (EIA), at the beginning of the pandemic U.S. refiners had 19.0 million barrels per day (BPD) of operable refining capacity (Source). This was the highest number ever reported by the EIA.

Here is the thing many do not understand about refining. It is a boom and bust business, and these refiners do not have crystal balls. It is widely reported when they make huge profits, but they also regularly endure huge losses.

U.S. energy policy has been clear about the intent to phase out fossil fuels. If you are a refiner forecasting billions in losses — and you require massive investments in order to keep your refinery operating safely and in compliance with the laws — you may very well simply make the decision to close down.

There are two excellent sources of information detailing which refineries closed, and why they closed. The first is the EIA.

During the summer, the EIA reported U.S. refinery capacity decreased during 2021 for second consecutive year, in which they discussed one of the major closures in 2021. They also showed this excellent graphic of how refinery capacity has evolved in recent years: 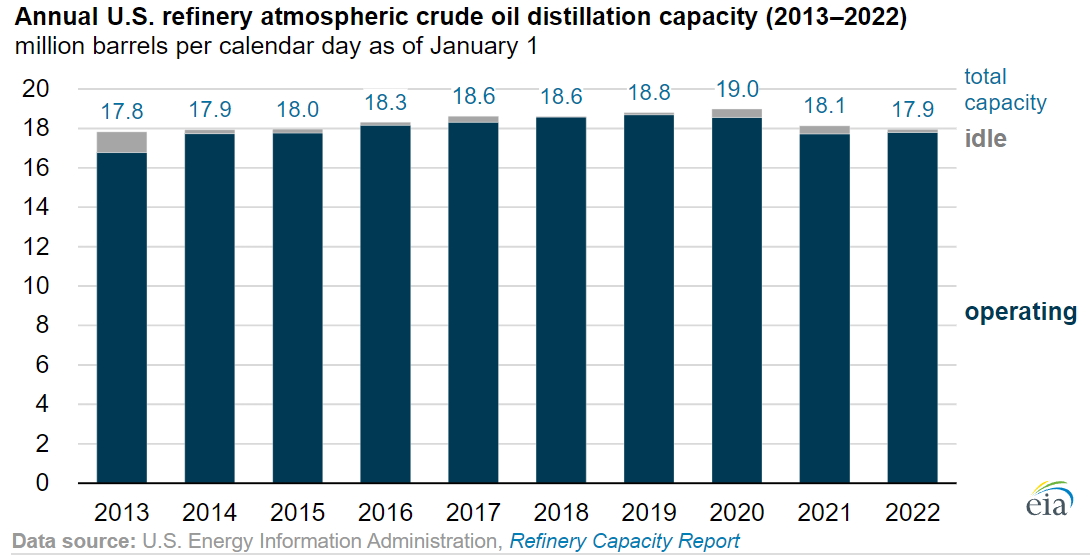 But I stumbled upon a more detailed look recently. In a Twitter thread, Laura Sanicola, an oil and energy reporter at Reuters, highlighted the individual refinery closures from the start of the pandemic through June 2022:

FACTS: Which U.S. refineries have shut since the global pandemic, and why?

Since the onset of the global pandemic, the US has lost nearly 1 million barrels per day of oil refining capacity, with more set to be shuttered in the next few years.
These are the plants:

She reports on nine refinery closures, but the theme is consistent. Most of the refineries were closed due to demand loss as a result of the Covid-19 pandemic.

But, aren’t these companies earning billions of dollars? Isn’t that an argument for keeping these refineries open? There are two points to make on that argument.

First, it is possible to make billions of dollars as a company, but to lose money consistently in an individual refinery. We have seen this happen a lot with East Coast refiners that didn’t have access to cheaper oil from the U.S. shale boom. They had to continue to procure crude oil on the international markets, and that put them at a competitive disadvantage.

Second, current refiner profits are a snapshot in time. Today, U.S. demand for petroleum has largely recovered. In fact, distillate demand has recovered to pre-pandemic levels.

But, these companies are projecting the future. They are looking at long-term demand forecasts for petroleum products. Those projections indicate declining fuel demand over time. Thus, they do not want to invest billions of dollars that could take a decade or more to pay off.

Imagine that you are running a chain of stores. Overall, your company is highly profitable, but you have stores that are consistently unprofitable. Further, those stores are outdated, the outlook for demand in these areas is weak, and it will cost a lot of money to upgrade them. You would probably close those locations.

That, in a nutshell, is why we have lost refining capacity in the U.S. It’s going to take some changes in our energy policy to address this.