Following my previous article on U.S. natural gas production, I engaged in a Twitter discussion on the causes of the natural gas price surge over the past two years.

I'm not so sure this article gets it right. The largest contributor to higher natural gas demand has been US power generation. Outside of the Northeast US natgas pricing still remains effectively disconnected from global energy markets given export capacity limits. @RRapier

What ensued was a discussion of the influences in the natural gas markets in recent years. Indeed, the comment above is correct that most of the demand increase in U.S. natural gas production in recent years has been in power generation, as power plants phased out coal.

But my article identified liquefied natural gas (LNG) exports as a culprit in the recent price surge. I was asked in response how this could have helped drive natural gas prices from under $2/MMBtu in early 2020 to nearly $9/MMBtu in August 2022.

There are four things to consider here. First, the ramp up of LNG exports that I alluded to in the previous article.

LNG exports are small compared to what we use for electricity production at 3.3 Tcf. However, as one Twitter used correctly noted “Marginally this is a huge increase.”

Indeed, over the same time period of 2015 to 2021, natural gas that went into electricity production only increased by 1.7 Tcf (Source). So, at present LNG is the fastest-growing outlet for U.S. natural gas production (although pipeline exports to Mexico have also soared in recent years).

The second thing to consider is that LNG exports have converted the natural gas markets in the U.S. from a mostly captive market, to one that is partially exposed to world prices. With those prices soaring as Europe seeks to acquire supplies to make up for the loss of Russian gas imports, U.S. companies are exporting as much LNG as they can. That reduces the amount available for sale in the domestic market, which leads me to the third point.

The primary reason natural gas was at $2/MMBtu two years ago is that the 2019-2020 winter was one of the warmest on record. That meant that we exited the winter with natural gas storage levels at the top of the five year average range, as seen below. 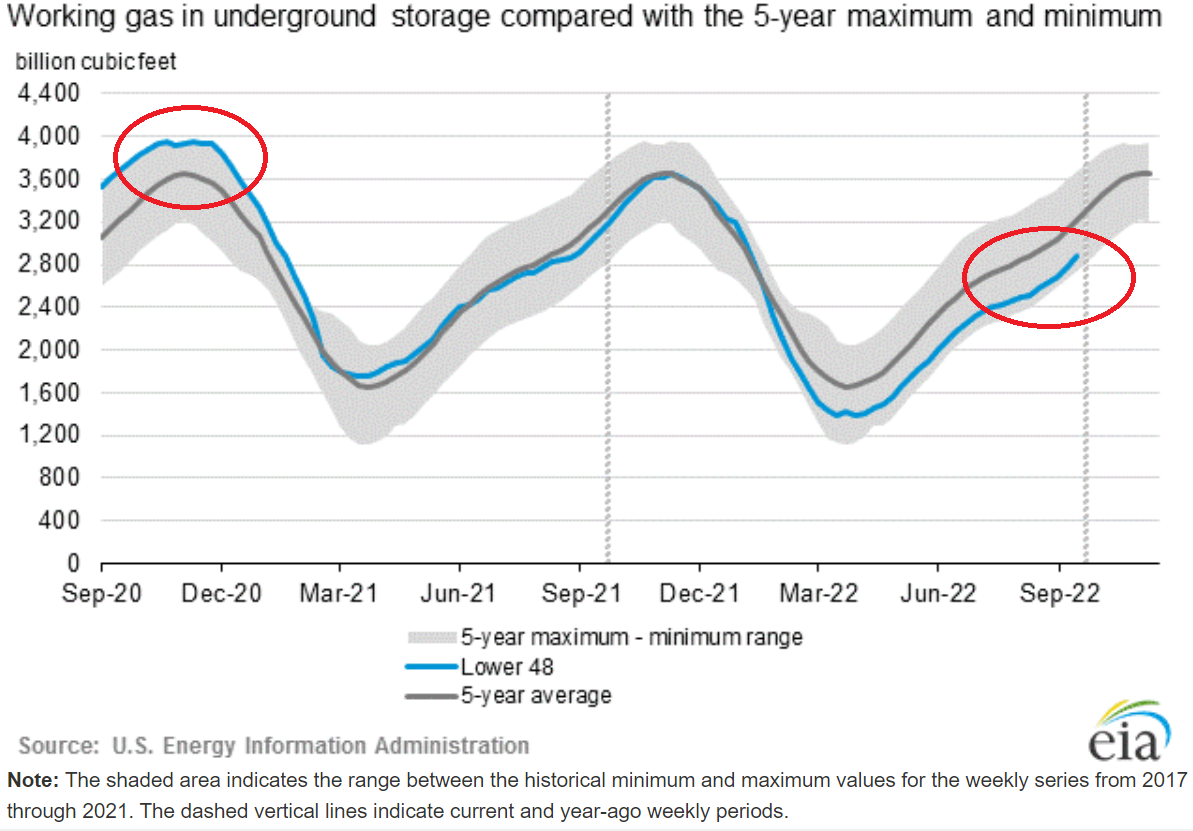 Note the two areas I have circled in the graphic. In 2020, natural gas inventories were at the top of the normal range, and this year they have dropped to nearly the bottom. In fact, the drop to the bottom roughly coincides with Russia’s invasion of Ukraine.

Note that natural gas production levels are at record highs, so we can’t blame a lack of production on this issue. This is from soaring demand, led in the past two years by the fastest-growing LNG export market in the world.

Finally, some might express skepticism that what amounts to relatively small changes in supply and demand (with respect to overall consumption) could have such a dramatic impact on prices.

My final point is that historically oil and gas prices tend to overshoot in both directions. A classic example is 2008. The price of West Texas Intermediate (WTI) opened the year under $100/bbl, raced to over $140/bbl by July, and then fell all the way to $30 by December.

Supply and demand didn’t dramatically change in 2008, but the short-term outlook did. During the first half of 2008, prices were driven by fear that oil producers wouldn’t be able to keep up with demand, and in the second half of the year it was driven by fear of a recession-induced demand collapse.

In fact, demand for oil did fall from 2007 to 2009, but only by 2.5% (before rebounding to a new record in 2010). But that very small change in the supply/demand picture sent oil prices on a volatile ride.

The same is true for the natural gas markets. Fear of having too much gas transitioning to fear of not having enough is indeed enough to cause the price to quadruple.

To summarize the four points, this is largely why natural gas prices quadrupled in two years: