The third quarter of 2021 closed on September 30th. The S&P 500 returned 1.4% for the quarter, and eight of eleven S&P 500 sectors posted a positive return. (Note that all returns discussed here are total returns, which include the effect of dividends paid). 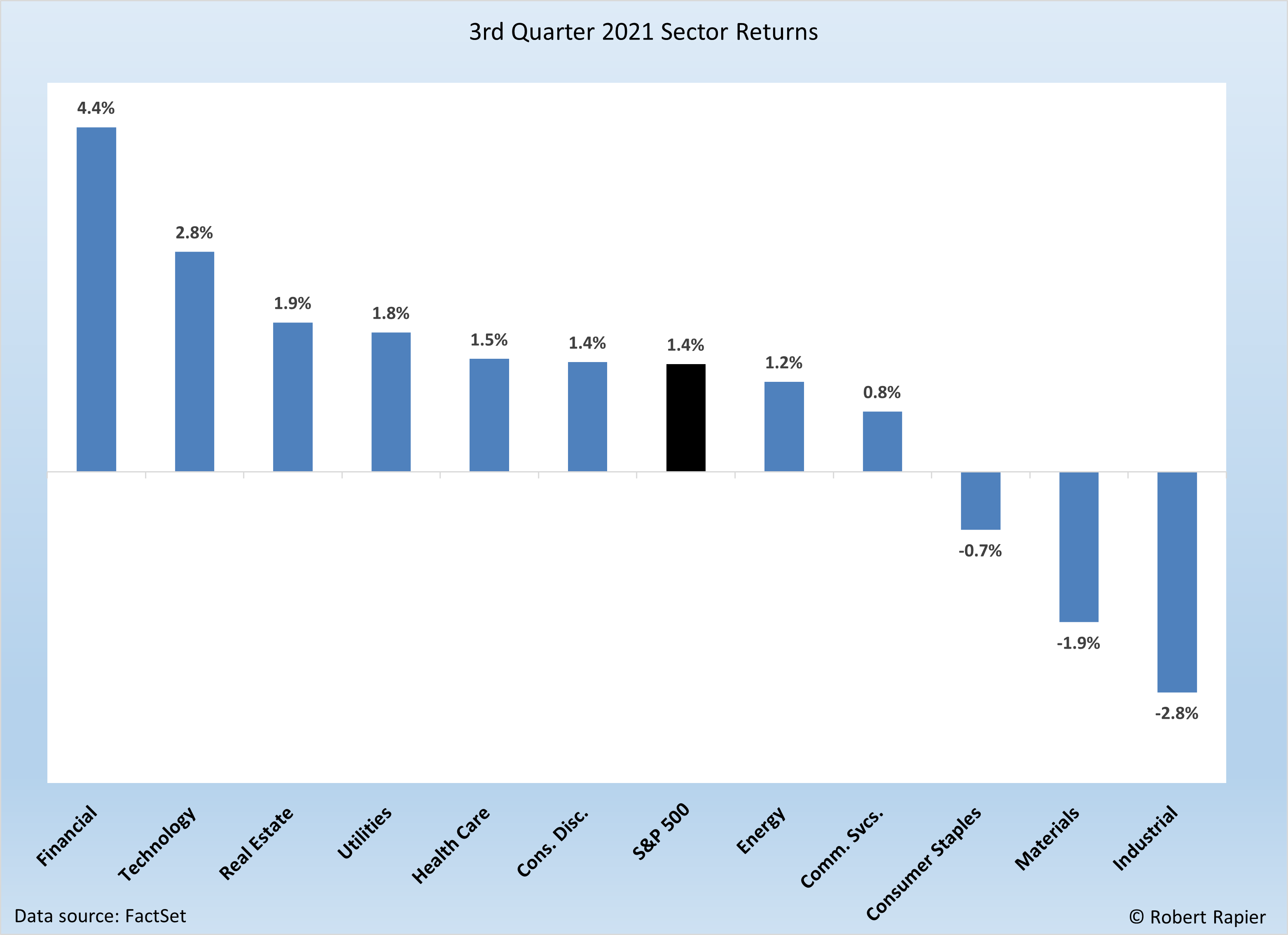 September was an especially bad month in the markets, with the S&P 500 falling 3.7% for the month.

Nine of 11 S&P 500 sectors were down in September, with the utilities sector getting hit hardest (-7.3%). The highlight of September was the energy sector, which returned 14.3% for the month.

The energy sector was the top performer in the first half on 2021, but after suffering a pullback early in the summer, the surge in September helped salvage the quarter.

The Energy Select Sector SPDR ETF (XLE) tracks an index of energy companies in the S&P 500. The XLE represents the stocks of large energy companies from different sub-sectors (e.g., integrated, oil production, equipment services). It is, therefore, a good benchmark for more conservative energy investors. Some of the XLE’s biggest holdings are ExxonMobil, Chevron, ConocoPhillips, EOG Resources, and Schlumberger.

Over the past year, the Energy sector is the top-performing sector in the S&P 500, with a total return in the XLE of 94%. That is primarily a reflection of last year’s deep Covid-19 induced plunge. Many energy companies have yet to recover to pre-Covid levels.

According to data provider FactSet — which I use to analyze companies — the average upstream company gained 7.0% in the first half of 2021. These are the companies that produce and store oil and gas. There are 58 companies that FactSet classifies as “upstream.” In that subsector, 67% recorded a positive return. ConocoPhillips, the largest company in that category, returned 12.1% for the quarter.

Among the 54 companies that FactSet classifies as “midstream”, the average return was -2.8%. Best among the group was GasLog Partners , which generated a third quarter return of 31.2%.

The integrated supermajors averaged a gain of 4.1%. After underperforming the rest of the group over the past year, the best performer in the third quarter was Royal Dutch Shell with a total return of 15.4%. Chevron and ExxonMobil both recorded small declines for the quarter.

The Big Three refiners — Marathon Petroleum, Valero, and Phillips 66 — posted an average return of -7.5% for the quarter. Marathon was the best performer with a gain of 3.3%. However, Phillips 66 was down 17.4% and Valero declined by 8.3%.

Momentum for the energy sector was slow in the early part of the quarter, but it came roaring back to life in September. The sector’s fate in the fourth quarter will be closely tied to oil prices, which continue to be strong.

The primary culprit driving oil prices higher remains U.S. oil production that is still down more than a million barrels per day from the pre-pandemic peak. Meanwhile, U.S. demand for petroleum products has nearly fully recovered.