As the Covid-19 pandemic began to spread last year, I developed an idea. I hypothesized that the pandemic would cause a permanent dent in oil demand. I covered that hypothesis in a couple of articles last year, including Will Covid-19 Hasten The Demise Of Fossil Fuels?

My reasoning was that the large scale move to telework would prove to be very popular, and some companies would simply continue to business that way.

Meetings that required people to fly halfway across the country could easily be done by teleconferencing. Once people were forced to adapt to this, they would embrace the advantages and the potential costs savings. I have participated in many such meetings over the past year, and the convenience vastly trumps the travel required to meet in person.

Before the pandemic it seems like most interviews for television broadcast were done in person in the studio. Now, most interviews are done via Skype or some other teleconferencing application. We accept that as perfectly normal now.

Don’t get me wrong. There are still advantages to meeting in person. Even as oil demand plunged last year, I did expect a significant rebound as the economy began to open up. I just didn’t expect it to rebound to pre-pandemic levels for at least a few years.

But I have noticed that over the past two months my daily commute has gotten steadily worse. I hadn’t checked gasoline demand in a while, but I was guessing that it had rebounded to something close to pre-pandemic levels.

According to the Energy Information Administration (EIA), for the week ending 4/16/21 U.S. gasoline demand was 9.1 million barrels per day (BPD). That is 71% higher than demand in the same week last year, and only about 3% lower than average mid-April demand from 2017 to 2019. The weekly average for total petroleum demand has exceeded 20 million BPD four times since February. That’s within 5% of pre-pandemic demand.

Demand for jet fuel has also bounced back. In the most recent issue of This Week in Petroleum, the EIA reported on the return of air travel:

“In February 2020, just before responses to the COVID-19 pandemic resulted in substantial reductions in air travel, the Transportation Security Administration (TSA) processed an average of 2.2 million air passengers per day. In April 2020, however, when the impact on air travel was at its highest, TSA passenger throughput fell to 0.1 million passengers per day.

The EIA showed steady growth in jet fuel demand following last year’s plunge, and they projected demand will return to normal by the second half of next year. 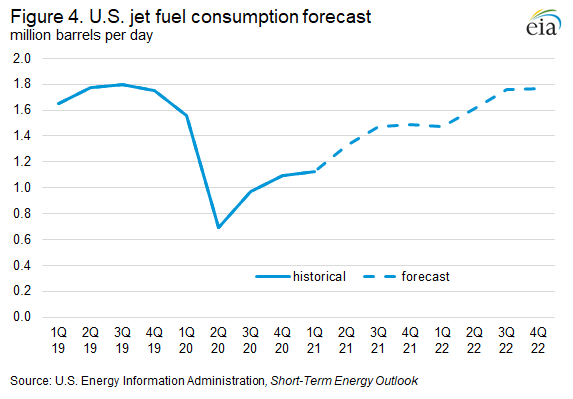 Thus far, my hypothesis has held up. Travel hasn’t yet returned to normal. My commute is getting worse, but traffic still isn’t quite as bad as it was before the pandemic.

Still, I think it’s premature to argue that peak oil demand has arrived.

There may be a permanent impact due to more telework, but it seems inevitable that the rising global population will ultimately lead to new oil consumption records. It just probably won’t happen as quickly as it would have because of the pandemic’s impact.