This article is the fifth in a series on the BP Statistical Review of World Energy 2020. The Review provides a comprehensive picture of supply and demand for major energy sources on a country-level basis. Previous articles covered overall energy consumption, petroleum supply and demand, natural gas, and coal.

Today, I want to cover the production and consumption of renewable energy.

Renewables were the only category of energy that grew globally at double digits over the past decade. For perspective, in 2009 the world consumed 8.2 exajoules of renewable energy. In 2019, that had nearly quadrupled to 29.0 exajoules.

The Review breaks the consumption of renewables into two broad categories. The “Renewables” category consists of wind power, solar power, biofuels. The category “Other” includes geothermal energy and power produced from biomass.

The Review reports “Hydroelectricity” as a separate category. That’s because hydroelectricity represents a mature category of energy production that is growing globally at a much slower rate than modern renewables like solar power. Over the past decade, hydroelectricity consumption grew at an average annual rate of 1.9%.

The Renewables category is further broken down into Renewable Power, which accounted for 86% of all renewable energy consumption. Within this category, wind (51%) and solar (26%) accounted for most of the consumption. Although wind consumption maintains a healthy lead over solar consumption, solar power consumption is growing at about twice the rate of wind power, and is likely to overtake it as the leading source of renewable power this decade. 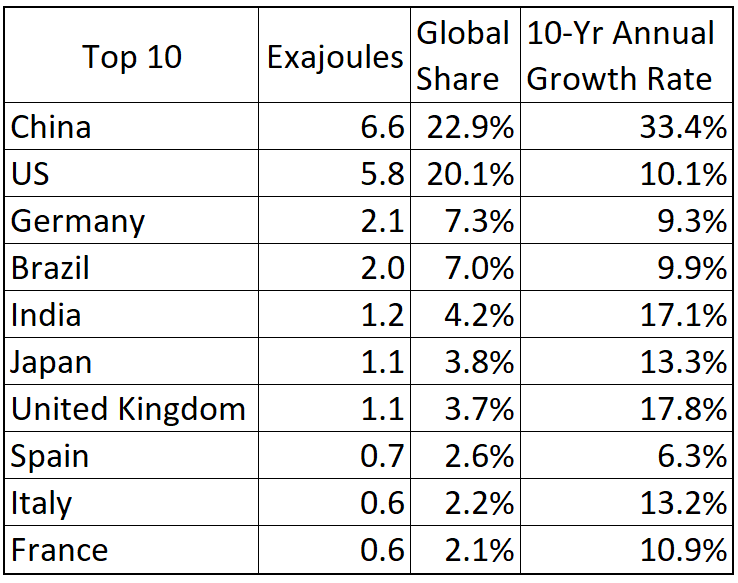 On the bright side, per capita consumption of renewables in the U.S. is still well ahead of China’s, but if the U.S. growth rate continues to be less than a third of China’s, it’s just a matter of time before they surpass us in that category as well.

Thus, while renewables have helped reduce the growth of carbon dioxide emissions, global carbon emissions continue to grow due to the overall growth rate of fossil energy consumption.