This article is the fourth in a series on the BP Statistical Review of World Energy 2020. The Review provides a comprehensive picture of supply and demand for major energy sources on a country-level basis. Previous articles covered overall energy consumption, petroleum supply and demand, and natural gas.

Today, I want to cover the production and consumption of coal.

Coal is often called the dirtiest fossil fuel. What is meant by that?

Fossil fuels are composed of carbon and hydrogen. They are hydrocarbons. When hydrocarbons are combusted, the carbon forms carbon dioxide and the hydrogen forms water. Coal contains a higher percentage of carbon than does oil or natural gas. So, when coal is combusted, it produces more carbon dioxide per unit of energy than oil or natural gas will produce.

Another issue with coal is that there are a lot of other associated emissions from coal-fired power plants. Historically, coal plants emitted a lot of sulfur dioxide, which causes acid rain. Regulations eventually reined in that problem, but coal-fired power plants still emit pollutants like mercury. They even emit more radioactive elements than a nuclear power plant. Thus, there have been many regulations passed that have attempted to lower coal’s impact on the environment.

But, because of the various pollution issues associated with coal, most developed countries have moved away from coal-fired power.

Although global coal consumption modestly declined in 2019, over the past decade it grew by an average annual rate of 0.8%. Nevertheless, global growth has been in a downtrend over the past five years. 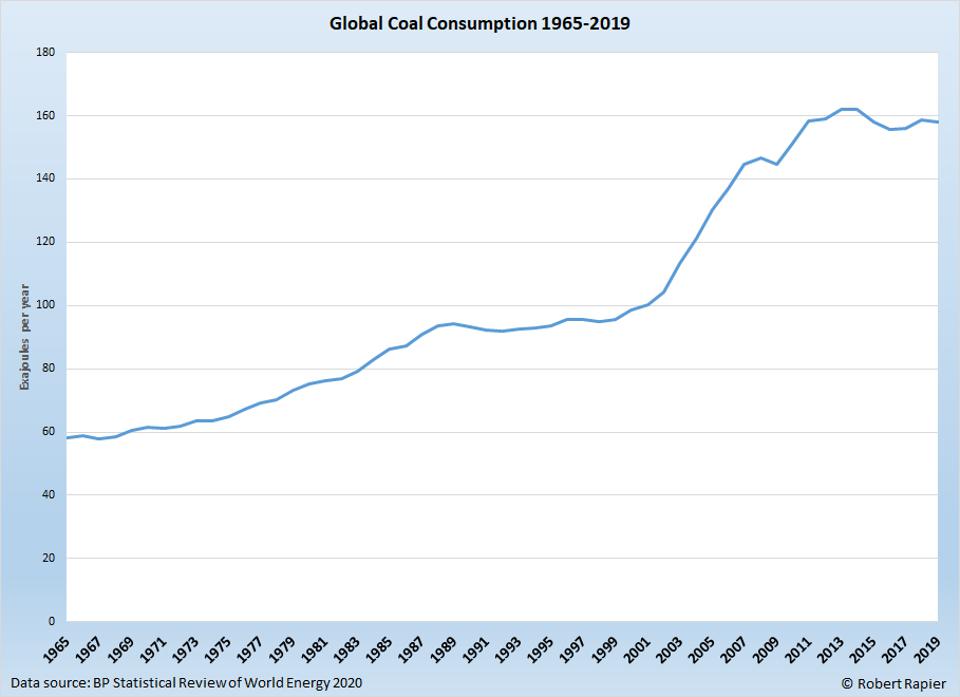 Growth is especially taking place in countries in the Asia Pacific region, which have seen coal consumption climb at an average annual rate of 2.4% over the past decade. This growth has been led by China and India, globally the #1 and #2 consumers of coal.

Six of the world’s ten largest consumers of coal are in the Asia Pacific region. Indonesia and Vietnam posted exceptionally strong growth rates in 2019 of 20.0% and 30.2%, respectively. Below were the world’s Top 10 coal consumers in 2019. “Change” refers to the growth or decline from the previous year. 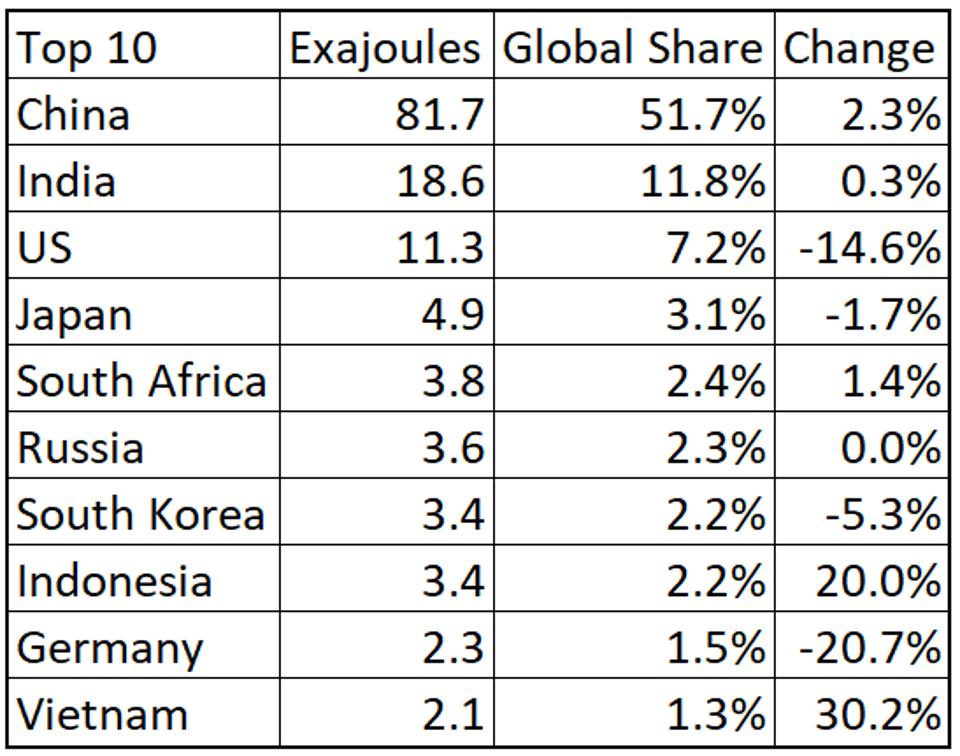 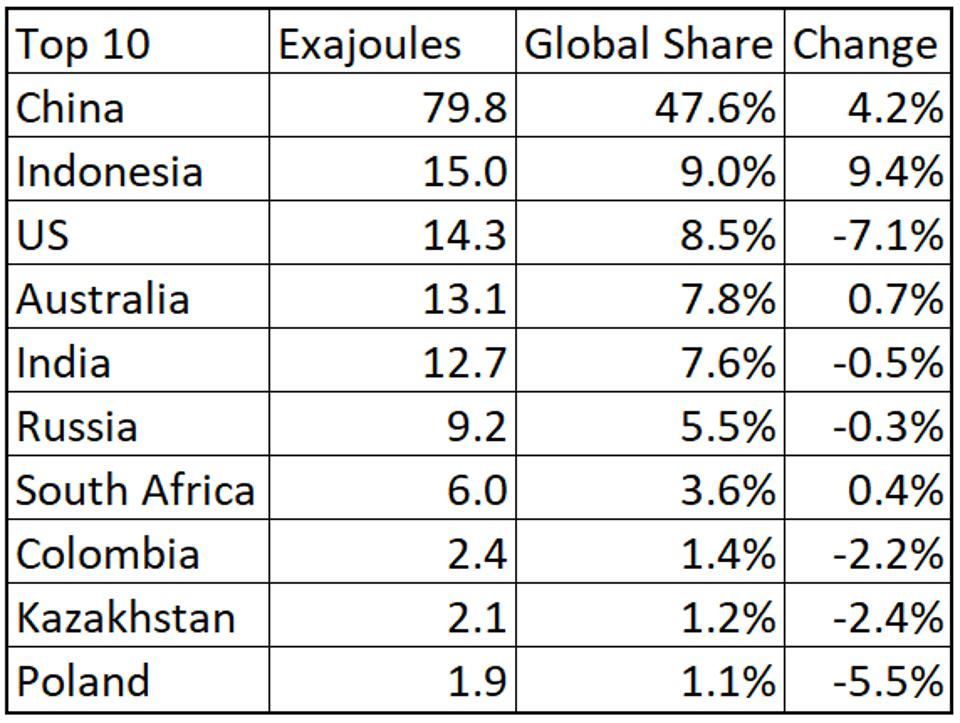 Within the 37 countries that comprise the Organisation for Economic Cooperation and Development (OECD), coal consumption peaked in 2007 and has declined at an average annual rate of 2.8% over the past decade. Consumption in 2019 was 35% below the 2007 level in OECD countries. 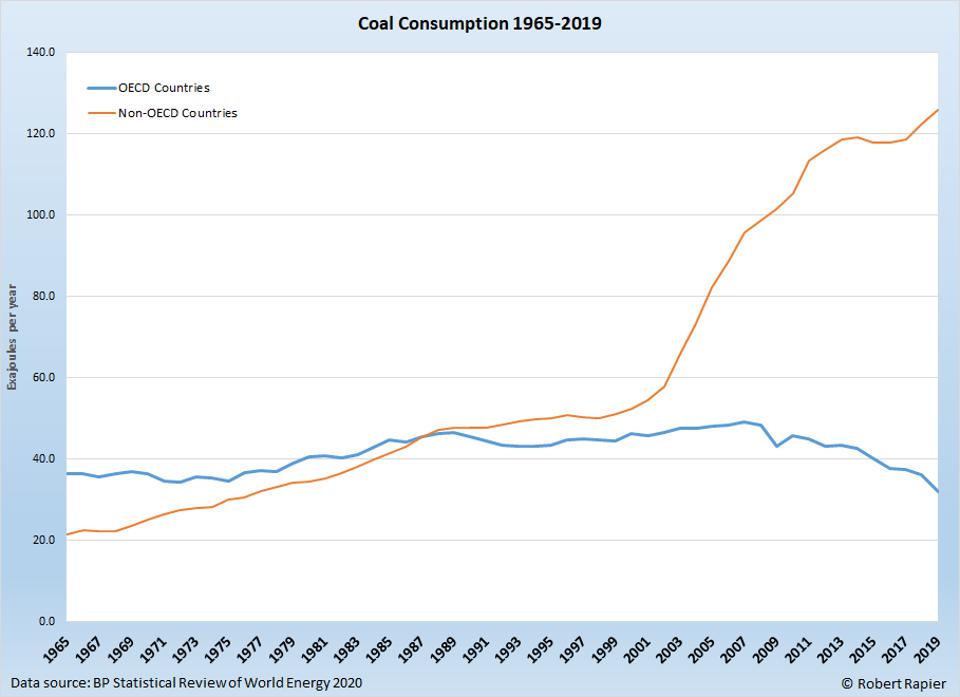 The dramatic decline in U.S. coal consumption is the primary reason U.S. CO2 emissions have fallen sharply in the past decade. Coal consumption in power plants was displaced by cheap natural gas and renewables, both of which have a much lower carbon footprint.