Oil prices have come a long way since the deep dive into negative territory a month ago. One could argue that the price of West Texas Intermediate (WTI) is now $70/bbl higher than it was a month ago, when it settled at -$37.63 on April 20.

Although the negative price seen near the expiration of the May contract was a brief anomaly, the June contract also dipped down to near $10/bbl. But instead of diving back into negative territory, the June contract steadily gained strength throughout the month of May, expiring above $30.

So, what has changed in the oil markets in the course of a month to so dramatically change the outlook? We can attribute this to at least three factors.

The first is that the U.S. oil rig count is falling at the fastest rate on record. From March 13, the rig count was cut in half in just over six weeks and is now down 65% since that date.

The only comparable period was when oil prices crashed in 2014, but it took nearly six months at that time for the rig count to be halved. 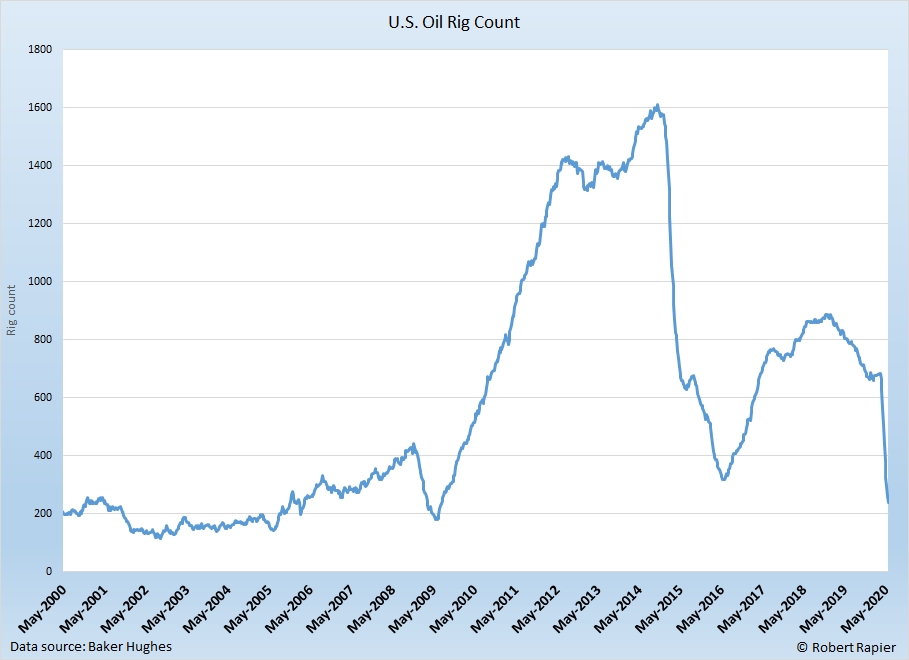 The falling rig count is an indicator that future oil production in the U.S. may be lower than it otherwise would have been. However, the price crash has also had a rapid impact on current U.S. oil production.

At the end of March, the U.S. was still producing 13 million barrels per day (BPD) of oil. By mid-May, that had dropped more than 10% to 11.5 million BPD. By comparison, following the 2014 oil price crash, oil production only fell by 1.1 million BPD, and that took a year to happen. 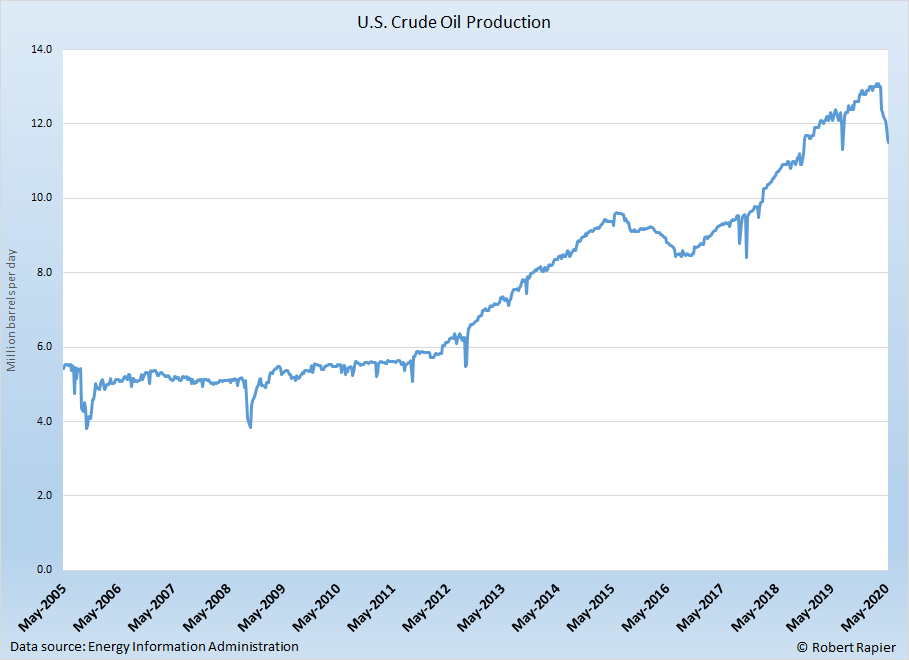 The only other time the U.S. has experienced a rapid 1.5 million BPD production decline was in the aftermath of Hurricane Katrina in 2005, but production quickly returned to normal afterward.

The third factor that has helped oil prices rebound is that demand has shown signs of recovery.

According to the Energy Information Administration (EIA), in early March U.S. consumption of petroleum products had reached 21.9 million BPD. That was one of the highest weekly demand numbers on record.

A month later, with most of the country under stay-at-home orders, demand had fallen to 13.8 million BPD. That was only about 10 days before the May contract took that deep dive into negative territory.

But, as some states have let stay-at-home orders expire, and as the traditional summer driving season approaches, demand has rebounded. By the second week of May, demand for petroleum products had climbed back above 16.5 million BPD. This is still nearly 20% below normal for this time of year, but it is a positive sign for oil producers and refiners.

Finally, although these factors are specific to the U.S., it was the U.S. that contributed the most to the petroleum oversupply problem in recent years. It is also certain that a similar dynamic has played out in many countries, and in conjunction with production cuts by OPEC and its partners.

So, while the oil industry still faces challenges in the face of weak demand, it looks like the worst is over for now.