With the collapse in oil demand, oil producers and refiners have come under intense financial pressure. Not far behind are the integrated supermajors like ExxonMobil and Chevron. These companies have upstream (oil- and gas-producing) assets as well as refining assets, so they are getting hit on both ends.

However, they also have substantial midstream assets. Midstream refers to the transport and storage of oil, natural gas, and finished products like gasoline. Midstream assets generally function as toll collectors, and are more insulated from the volatility of commodity prices.

But being insulated from the volatility doesn’t mean they are completely immune from the impacts of the price collapse. Although most midstream companies have long-term agreements with their customers, they are likely to face tougher terms as their agreements come up for renewal. Thus, a long-term price collapse will eventually impact the fundamentals of the midstream sector.

We are already witnessing impacts with the weaker midstream players. Some have already cut distributions, but others have said that they are fine – at least for now.

But the extent of cuts to capital expenditures may also be revealing. A recent note from Alerian, an independent provider of energy infrastructure and MLP market intelligence, sheds some light on this topic.

The note featured the following table, which summarizes midstream capital expenditure (capex) reductions for 2020 for several midstream companies. On average, capex has been reduced nearly 30% against initial guidance, and more than 45% versus 2019. 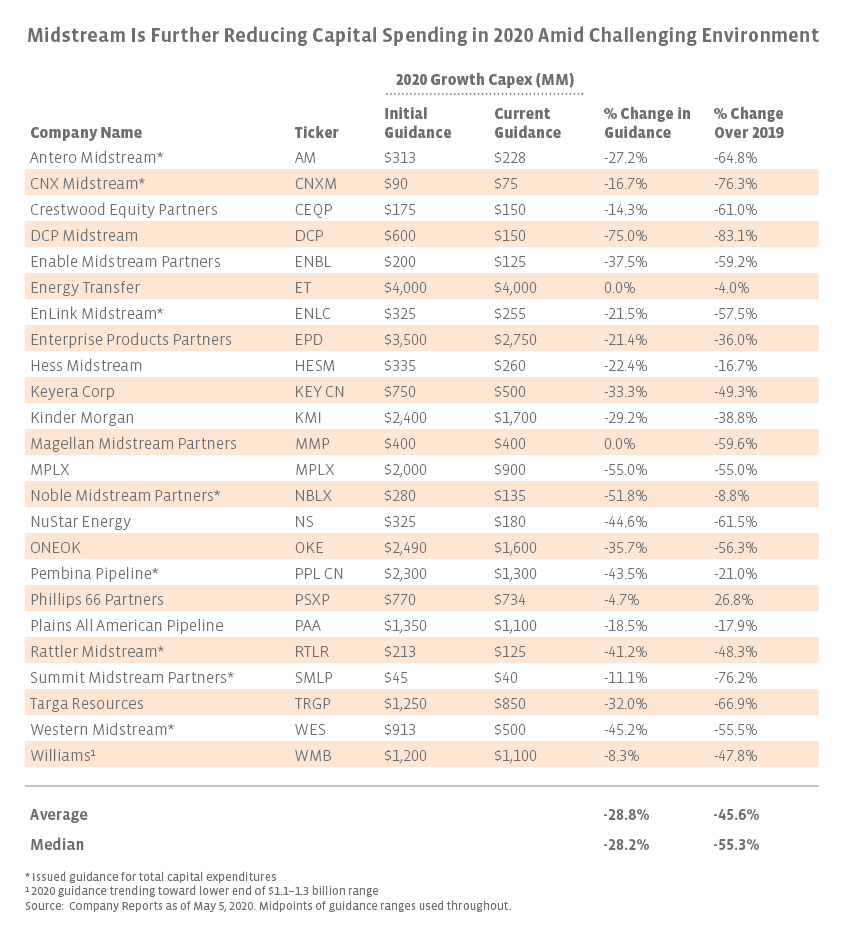 One might surmise that the companies making deep cuts to guidance are companies that are at the greatest risk of making distribution cuts. In fact, the deepest cuts listed are by DCP Midstream, which has already announced a 50% distribution cut.

There are other reasons a midstream might make deep cuts to capital spending. They may just decide to be extra conservative given the uncertainty hanging over the oil and gas sector.

But as an investor, I would be particularly wary of those companies announcing much deeper cuts than their peers. That is, at a minimum, a red flag about the company’s financials that should be investigated in greater detail.