In the previous installment of this series, I highlighted Jeff Bezos’s recent commitment of $10 billion to fight climate change.

In that article I divided carbon dioxide emissions into two broad categories: What has already been released into the atmosphere (the legacy emissions), and ongoing releases. I think it’s important to distinguish between these two sources, because 1). Different strategies are needed to address the two categories; and 2). Different countries are primarily responsible for the different categories.

Developed countries are primarily responsible for most of the CO2 that has been emitted into the atmosphere (and absorbed by the oceans). The number of strategies capable of dealing with that category is fairly limited.

I mentioned the potential for planting trees, and I got a lot of positive feedback regarding that particular strategy. I will probably do a followup in a few weeks going into greater detail. There is some potential for removing CO2 from the oceans as calcium carbonate, but that application is probably limited.

Today I want to discuss the second category: Ongoing carbon dioxide emissions. To put this problem in context, I want to share a graphic I created using data from the most recent BP Statistical Review of World Energy: 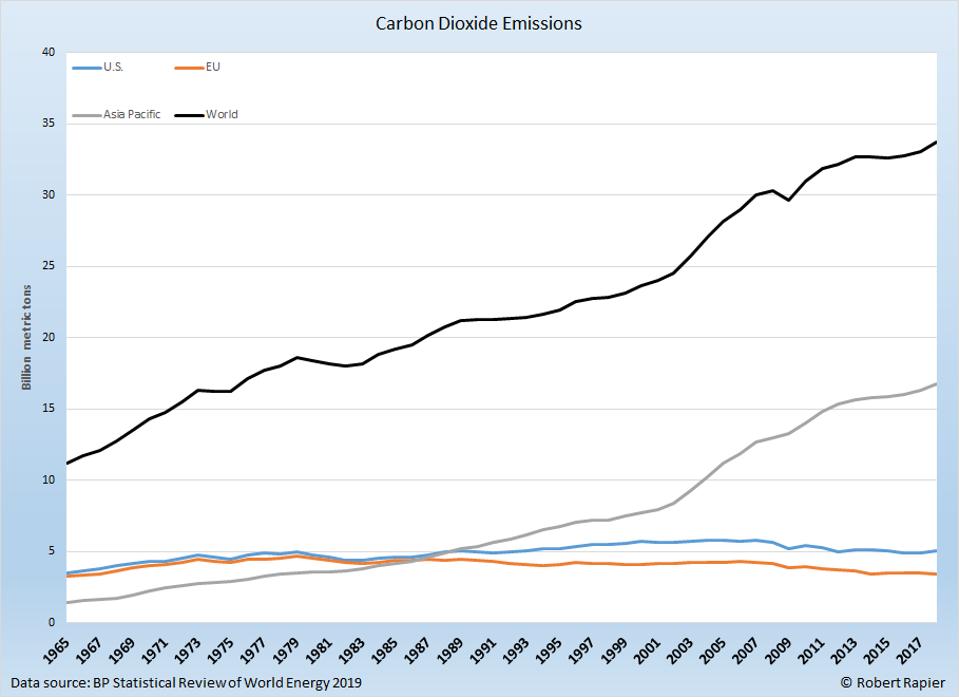 The graph starts in 1965, so it doesn’t show the growth of emissions in developed countries since the Industrial Revolution. But what it does show is that those emissions are stable today, and that what is currently driving emissions higher are the developing countries — in particular the Asia Pacific region.

Thus, a strategy aimed at curbing emissions in a rich country like the U.S., for example, won’t necessarily work in China — which already has much lower per capita emissions, but far more people. As a result, China leads the world in carbon dioxide emissions.

Contrary to the case with legacy emissions, there are many pathways for reducing ongoing emissions. The primary culprits that add carbon dioxide to the atmosphere are the coal, oil, and natural gas — the fossil fuels — we consume for energy. Policies and technologies that reduce that consumption will lower the amount of carbon dioxide emitted.

Consider coal, for example. In the U.S. and the EU, coal consumption is falling. 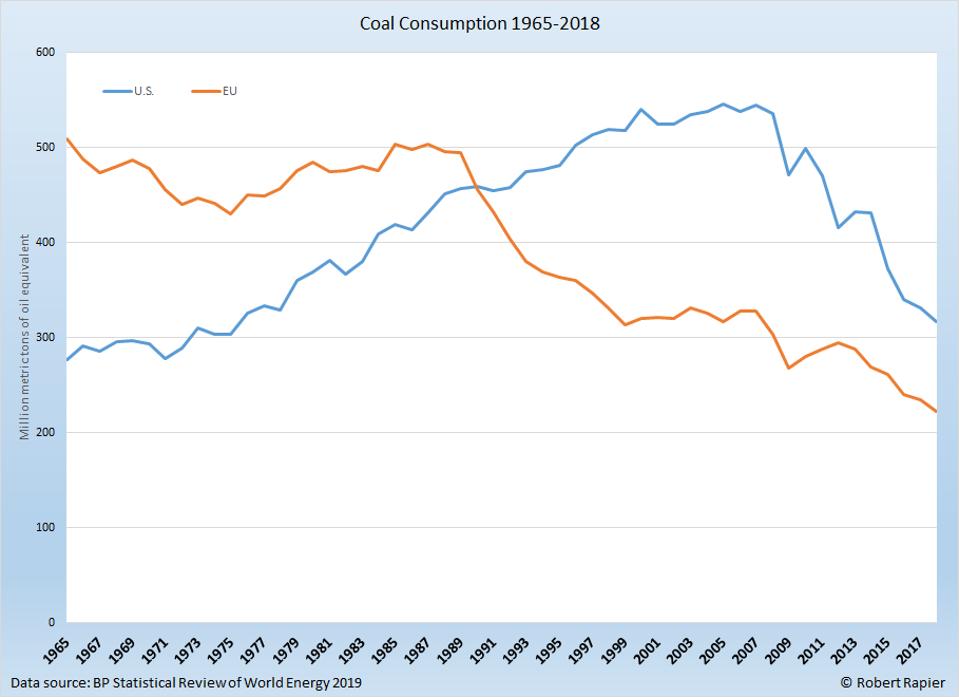 In the U.S., coal consumption has dropped by 44% since 2007. The primary reason is that utilities have moved away from coal to produce power. There are two drivers behind coal’s decline: Natural gas and renewables.

Low natural gas prices have made it economically attractive to shift to natural gas for baseload power. That is the top reason for the reduction in carbon dioxide emissions. However, renewables are also making a significant contribution, and their adoption is growing at a much faster pace than that of natural gas.

Natural gas and renewables complement each other well, because natural gas plants can be ramped up quickly to compensate for some of the intermittency of renewables like wind and solar power. However, natural gas is still a fossil fuel, and while it’s generally accepted that it’s cleaner than coal, if there is a high leakage rate during production and transport, natural gas can be even worse than coal.

Hence, I wouldn’t spend any of Bezos’s money on trying to replace coal with natural gas. That’s happening already, but it’s an interim step.

On the other hand, the world is already spending around $300 billion a year on renewable energy projects. The vast majority of that is going to wind and solar projects. Those are critically important, but $10 billion isn’t going to move the needle much, except to the extent that it can be used as incentives.

China is the world’s largest coal consumer, but China also leads the world in spending on renewable energy. Yet, their emissions are still rising. The biggest challenge for China — and for all countries for that matter — is that renewables are intermittent and therefore they need to be backed up.

That’s where I think Bezos’s money could make a real impact. The holy grail for renewable power is affordable backup power that would allow renewables to provide power whenever it is needed.

Battery backup projects have already been completed — and many more are underway — but spending in this area is a fraction of what is being spent to deploy wind and solar power. To date, the world’s largest lithium-ion backup project is the 100 megawatt (MW) Hornsdale Power Reserve installed by Tesla to back up the adjacent 315 MW Hornsdale wind farm in South Australia. The reported cost of this project was about $50 million.

Money devoted to driving down the costs of these projects, and incentivizing additional projects, can go directly to toward boosting the amount of renewable power supplying the grid. That, in turn, can further reduce the need for both coal-fired and natural gas-fired power. This is a solution that would be broadly applicable around the world, and one that could make a big impact in Asia.

Beyond coal and natural gas, we have to focus on oil consumption. Electric vehicles (EVs) are growing rapidly, but even at those rapid growth rates it’s going to take a while before they really make a significant dent in oil consumption. Money devoted toward improved batteries (which can also benefit utility backup) and any money aimed at boosting the adoption of EVs should help lower CO2 emissions — as long as the power being used is largely renewable.

We will still require liquid fuels in some applications for the foreseeable future. But liquid-based petroleum alternatives beyond corn ethanol and biodiesel are still very much at a developmental stage. Further, most alternatives remain highly capital intensive. Thus, any money devoted toward liquid fuels would be spent primarily on research and development.

Finally, I would take aim at personal transportation itself. Boosting the number of people using mass transportation would further reduce the total number of vehicle miles traveled. So I would look for projects that either advocate for mass transit, or look for ways to efficiently subsidize mass transit. This would probably be a capital intensive effort, so $10 billion may not go a long way there. So it’s going to be important — with any efforts — to leverage the money with matching contributions.

To summarize, I would split Jeff Bezos’s $10 billion commitment into two pots.

From the first pot, I would fund projects that can remove CO2 from the atmosphere. The lowest hanging fruit there is likely funding initiatives that are planting massive numbers of trees around the globe.

The second pot would be used to mitigate ongoing emissions. The holy grail there is probably improved energy storage options, which in theory could enable a fully renewable electric grid. Achieving this would eliminate a major global source of CO2 emissions.

Beyond that, I would fund programs and incentives to increase the adoption of electric vehicles and mass transit.

In fairness, there are many options that can help. I didn’t mention nuclear power, for example, because conventional nuclear technology is also capital intensive. It is possible that I have overlooked some important options. I just tried to focus here on those that I think could have the biggest impact for the money spent.