A lot of investors are shorting Tesla. Here is how to profit if Tesla’s share price falls, at far less risk than selling shares short.

Let me first make clear that I have nothing against Tesla as a company or its CEO Elon Musk as a person. I believe the future of EVs is incredibly promising. But I think Tesla has dug a deep financial hole following years of unrealistic, and ultimately unrealized promises by Musk.

Tesla’s financials are a disaster. Short interest stands at a very high 28.7% of the float, which is a sign that many investors are betting on Tesla’s downfall.

But Tesla maintains legions of devoted fans who are certain that Musk is positioning Tesla as a dominant force in a future world in which everyone will drive an EV. Thus, weakness in the share price is often viewed as a buying opportunity. I have documented previously that Tesla shares will sometimes soar on the back of an extremely poor earnings report.

This behavior is well-illustrated by a chart showing Tesla’s trading range over the past year. Shares spent most of the year oscillating between $300 and $350 a share, and the price often changed rapidly: 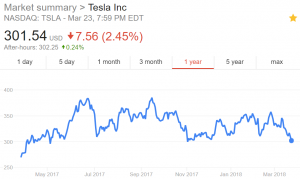 These factors make Tesla a risky short, and many investors have lost a lot of money shorting the company. That’s the problem with shorting. You can be ultimately correct about the future of the company, but if the price surges in the interim it can wipe you out. In short, your gains are limited but your losses are undefined and unlimited.

So I settled on a different strategy with Tesla which has resulted in an 83% win rate over the past year. (I reported I had four wins in five attempts in last week’s column, but I closed out another profitable trade after that column published).

Here is how I did it.

If you look at just about any two to three month period over the past year, Tesla shares traded at $350 (or more) but then also traded down to about $300. In other words, Tesla has dropped each time it has rallied, and vice versa.

I previously described the strategy of setting up a bearish option spread in Equifax Breach: How I Protected Myself (And Made a 48% Profit In 5 Days). In a nutshell, you are setting up an option spread of limited risk and limited (but substantial) reward based on a falling share price.

Let’s look at some actual Tesla option pricing to better understand this trade. Last Friday Tesla shares closed at $301.54 a share. At that time, a $325 Tesla call option that expires on April 20th (26 days from when I writing this) cost $630 per contract. This option gives the purchaser the right to buy 100 shares of Tesla stock at $325 a share.

You earn the maximum return on this trade as long as Tesla closes at or below $325 a share on April 20th, because both contracts are worthless at expiration. (You don’t exercise an option to purchase shares at $325 if they are trading at a lower price than that). Your breakeven on this trade is $326.30 ($325 plus the $1.30 per share premium you collected).

If the share price closes at or above $330 on April 20th, you will lose the maximum of $370 per contract. But your losses are capped, because you would own the $330 option as insurance against Tesla shares rising above that level.

Is The Win Rate Good Enough?

Is this a trade with an acceptable risk/reward ratio? We can use mathematics to estimate this. While there are important caveats that apply, the historical volatility (HV) of a stock can be used to estimate the future price. Bear in mind that this is just an estimate, as the future volatility can be quite different from the HV.

Here is this calculation on Fidelity’s platform: 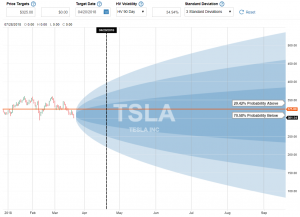 Fidelity’s probability calculator, using the HV of the past 90 days, estimates that there is a 70.58% chance that Tesla closes below the $325 target price on April 20th. Assuming the future volatility doesn’t differ sharply from the HV, that sounds like a pretty good bet, right?

That depends on how much is risked. The math is a little more complex than this, and it doesn’t take into consideration closing out trades early or trades closing partially profitably, but let’s simplify with a couple of approximations.

Let’s say that 25% of the time you lose the maximum in this particular trade of $370 per contract. Let’s also assume that 75% of the time you make the maximum profit on the trade. Just to break even on four trades, the three winning trades have to equal the one losing trade. So the amount of credit you require per winning trade is $370/3, or $123.33. Again, that’s just to break even in this particular case.

For this hypothetical trade, we received a credit of $130, which is marginally better than breakeven. But if we only got $120 per trade in this situation, we would lose money in the long run even if we won 75% of the time. In fact, you could easily have a 90% win rate and lose money in the long run if you aren’t being compensated enough to offset the occasional big loss.

But Tesla tends to rally and retreat. So I will set up the trade with a limit order and ask for $150 per spread. As Tesla rallies, the available credit will grow. When Tesla retreats, the credit will shrink, and you can either close out early for a partial profit or wait until expiration.

That trade has now successfully worked for me on five of six attempts. The only time it failed me was the last week of last month. I had a $350/$355 spread on, and shares rallied to $360 just before closing. (Had expiration been a week later, it would have been a successful trade as the share price dropped to $320 the following week).

Of course, that’s a known risk. Your win rate isn’t going to be 100%. The trick is to make sure your wins are compensating you enough that you are consistently making money despite the losing trades.

These bearish spreads don’t have the ultimate profit potential of short-selling, but neither do they have the unlimited risk. It’s a strategy that can pay off in any kind of market, but it can pay off especially quickly if the market drops sharply.

To find bearish trades like Tesla, I apply certain search criteria and look for companies with a weak short-term outlook. I review analyst ratings and technical indicators. Then I search for suitable risk/reward ratios.

I have used the same strategy successfully on five straight bearish trades of Chipotle (NYSE: CMG). I also closed three other successful trades last week as the market dropped, including Facebook (NYSE: FB).

There are plenty of similar opportunities out there. You just have to make sure you aren’t kidding yourself with a high success rate but a credit that’s too low to compensate for the losses.